One of Italy's most unusual sporting events will be held in Montepulciano on August 25th. 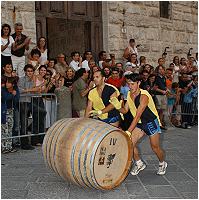 Barrel rolling at the Bravio delle Botti
One of Italy's most unusual sporting events will be held in Montepulciano on August 25th.
A centuries-old race takes place in the tiny village's stone streets on the last Sunday in August each year, with eight teams competing to roll enormous empty wine barrels along the course in the quickest time possible.

Each barrel is rolled by two 'springitori' (barrel rollers), representing a different district of the village. They compete for a palio - the painted silk banner traditionally awarded to Tuscan sporting victors - etched with an image of San Giovanni Decollato, the patron saint of Montepulciano. 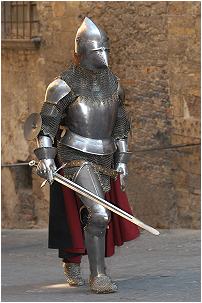 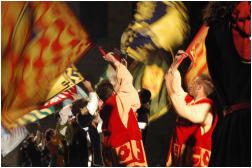 The commemorative race has been held over the same course for six centuries. Though its exact roots are unclear, it certainly predates 1373, in which a whole chapter of the statute published that year was dedicated to the proper running of the palio.

Like most palios of the region, including the famous Palio di Siena, Montepulciano's event was originally a horse race. However, for reasons of public order, it was converted to a barrel race in 1974 at the behest of a local priest.

The event begins with hundreds of villagers and tourists taking part in a traditional parade in the late afternoon.

Then, at seven in the evening the village's bell tolls, and the springitori begin rolling the barrels along the 1,800 metre course. The race takes about ten minutes to complete.