Moving around Tuscany by car

Touring Tuscany with your own means of transportation gives you maximum flexibility.

Touring Tuscany with your own means of transportation gives you maximum flexibility. The main roads are good if often busy. The traffic around Florence, on the autostrade and superstrada between Florence and Siena can be intense.

Remember that the autostrade are toll roads, but there aren't that many in Tuscany. The backbone of the Italian motorway system, the A1 (Autostrada del Sole) goes from Bologna through northern Tuscany, swings around Florence and heads southeast towards Arezzo and Cortona before continuing on to Rome. Off the A1, the Autostrada Firenze Mare A11 motorway connects Florence to Lucca/Pisa and the Autostrada A12 motorway moves along the seacoast from Genoa and La Spezia through Viareggio, Pisa and Livorno. The road continues all the way to Rome but at Rosignano Marittimo, south of Livorno, the roadway ends and the road continues along the Via Aurelia. 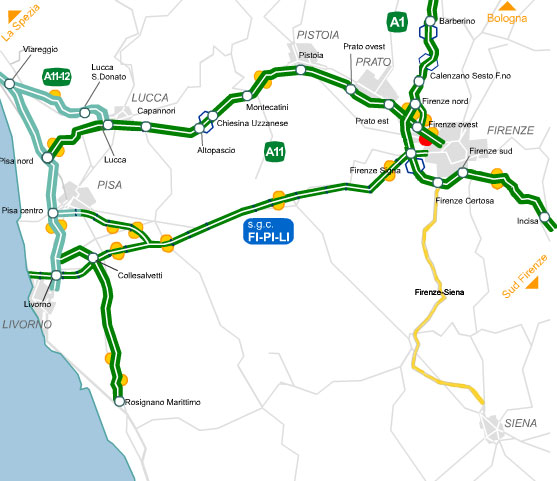 A couple of four-lane, toll free roads do exist as alternatives to the autostrade. For example, the SS1 (Via Aurelia) along the coast is four lanes almost all the way from Livorno Sud (south) down to Tuscany's southern border with Lazio. The SGC highway (known as the Fi-Pi-Li) connects Florence, Pisa and Livorno. The SS2, also called La Cassia or Senese, links Florence and Siena although this is only a two lane road.

Away from the main centers, the smaller back roads frequently offer pretty drives but be prepared to take your time. Progress around Tuscany's winding roads can be slow.

For traffic information, you can call CIS Viaggiare Informati at 1518, a number active 24 hours a day.

Gasoline
Gasoline (benzina) in Italy is among the most expensive in Europe. Prices have been around € 1,25 per liter lately for unleaded (senza piombo) (about $5 per gallon)! Stations along the autostrade generally cost up to 10 cents more per liter.

Stations on the autostrade are open 24 hours a day. Otherwise, hours tend to be from 7.00 am to 12.30 pm and from 3.30 to 7.00 pm. Many are closed on Sundays and holidays, and those that open then are then closed on Mondays. Don't assume you can't fuel up if the station is closed; many have a self-service pump that accepts bank notes.

Breakdown, Accident or Emergency
As a rule, holders of auto insurance with foreign organizations such as AAA (USA), AA (UK) or RAC will be provided with an emergency assistance number while travelling in Italy. You can also call the Automobile Club d'Italia (ACI) for roadside assistance and a tow by calling 116. If you have the appropriate insurance, you should be covered. It is likely in any case that an ACI truck will show up regardless of the number you use.
For more serious trouble, call the Police at 113, Fire department at 115 or Ambulance at 118.

City Driving
In general, in most cities you should park your car and forget about it. Driving in the historical center of most towns is either banned or restricted and finding a legal parking spot can be a nightmare. Until you know your way around, park in a designated metered parking area or parking station. If you leave the car away from the center, you can generally find free street parking.
When you do drive around in the cities, it will be a bit chaotic and unnerving initially. Road rules and traffic lights are generally respected, but many drivers will drive very close to you (not respecting safe stopping distances) and many double park (as a way to resolve the problem of looking for and not finding a parking spot).
Never leave anything valuable in your parked vehicle. When possible, do not leave anything in the car AT ALL because the sight of suitcases or bags invites thieves.