Abetone is the most important ski resort of the Centre of Italy. It is known and appreciated in all over the world. 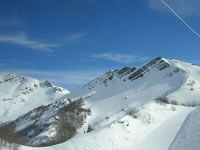 Abetone is the most important ski resort of the Centre of Italy. It is known and appreciated in all over the world, not only for its various ski runs but also for the great champions as Zeno Colò, Celina Seghi and Vittorio Chierroni who praised it to the skies.
The State wood rich in firs, larches and pines is crossed by paths and is also the starting point for a range of excursions: from the simple walks to trips to the mountains.
The ski slopes are situated between four marvellous linked valleys: Val di Luce, Valle dello Scoltenna, Valle del Sestalone and Valle di Lima. These valleys form one of the most beautiful, famous and natural scenery of the Appennino.
Abetone pooled with the nearby ski resorts of Corno ale Scale and of Cimone for the Big Snow ski-pass. It has moreover strengthened the snowfall using one hundred cannons. Abetone owes its name to a huge fir which was cut down towards the half of the 19Th century in order to build the road which should link the Tuscany Grand Ducky to the Estensi’s lands. 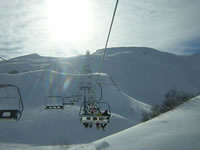 Two pyramids recall the work of the sovereigns of Modena and Tuscany to build the road .But come back to the ski runs and start talking of Selletta from where you can ski on the black slope of Sestaione and reach Foce di Campolino Or you can , always from Selletta, enjoy yourself skiing on Monte Gomito’s slopes and on Faitello’s ones and then go towards Val di Luce.
From there you can go back up to Alpe Tre Potenze , a landscape recalling the Alps, nearly two Thousand metres high. In short Abetone ski resort can be defined as the queen of the Appennini thanks to its more than 40 ski facilities, to its seventy kilometres of ski runs, including the Cutigliano, Doganaccia and Pian di Novello’s ones, and about fifty cross country ski runs.

Abetone is at 1400 metres above the sea level, near the border between Tuscany and Emilia Romagna; it is set in a splendid forest, owned by the State, which markes the resort well-known all over Italy and particularly enchanting. You can appreciate the place even in summer, climbing the mountains to the high peaks.
Ski runs are available in four marvellous valleys: Luce valley, Sestaione valley, Lima and Scoltenna valley; there are numerous ski facilities: 1 calbe car, 2 cabinways, 9 chair lifts, 15 skilifts, 37 ski slopes, 5 ski schools, 2 cross-country slopes and 20 kilometers of ski slopes covered with artificial snow.
The charm and beauty of Abetonelies not only in its natural environment or snowy slopes but in its accomodation facilities too: typical restaurants, cinema, skating-rink and what ever the tourist can look for during his holiday.