Anghiari stunning medieval little town on sides of the hills between the Sovara and the valley of the Tiber. 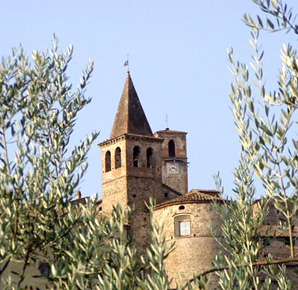 Stunning medieval little town on sides of the hills between the Sovara and the valley of the Tiber. Its name is connected with a famous battle ( the Battle of Anghiari) fought in 1440 in the plain of Anghiari and painted by Leonardo in the Salone of Palazzo Vecchio in Florence. Going up the hill you see the Borghetto, the medival core surrounded by imposing XVI cent. walls; the Campano, a medieval tower which, like a lighthouse, leads the visitor around; the Badia, an old rupestrian church founded by the Camaldoli monks about 1000. In the heart of the historic centre stands the Palazzo Taglieschi, seat of the Museo Statale which houses fine works of art (a policrome wood Madonna by Jacopo della Quercia, some Della Robbia terracotte, a XVI cent.portable organ still working). In spring the lanes of the village are animated by crowds of visitors coming to the traditional Arts and Crafts Fair. 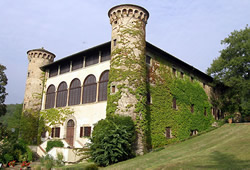 GALBINO CASTLE
Sitting between the Sovara river and the Libbia main road, the castle of Galbino was part of the feudal domain of Conte Ranieri and can therefore trace its origins back at least to the year 1000.
Subsequently transformed into a private residence, the castle now has a basic square shape with a raised central section and four round towers on the corners.
Elegant arched loggias with stone columns, added during its renaissance period conversion, run along two sides.
The castle can be seen particularly well from the little road that links the village of Tavernelle to the ex convent of San Niccolò a Gello (a centre which is now organised to receive youth groups and religious communities). 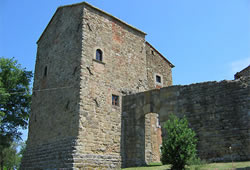 Pianettole and the expansion of the Camaldulian Order
Pianettole is in a fairly good state of repair and thus represents a nice example of a medieval fortified habitation with a high, encircling stone wall and a tower guarding the west facing gateway.
The tower still has its wooden attics linked by stairways and there is a big fireplace on the first floor. The history of Pianettole is linked, at least in part, to the presence of the Camaldulian Monks in the Tiber Valley. 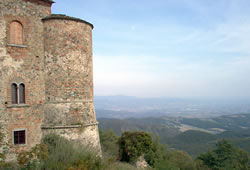 MONTAUTO CASTLE
The castle was the strongest in the area, with three rings of defensive walls and a powerful keep. The importance of the castle was principally due to its position: at a height of over 700 metres it was, to all intents and purposes, impregnable with two sides sheer right down to the Sovara river, one protected by the rocks of the mountain and the front, facing the only route of access, heavily fortified and from which its domination of the surrounding territory was total.
I t was also the place that St. Francis of Assisi liked to stop at during his journeys to and from La Verna and, until 1503, the cassock that he had been wearing when he received the stigmata at La Verna was kept and treasured in the Chapel of Montauto. 1503 was, in fact, the year that the Florentines took the castle by trickery and all of its treasures were stolen.
It subsequently went through various ups and downs until it was almost totally destroyed, finally being rebuilt in the Renaissance era, the most obvious sign of which is the beautiful corner tower with its steep, conical base facing the access route and attributed to the architect Francesco di Giorgio Martini.
The mullioned windows and finishing touches to the loggias were added soon afterwards when the castle became a family home.
Apart from the chapel mentioned above, Montauto also has a larger church with a lovely carved doorway and external fortifications. The castle and its surrounding estates are still owned by the Count Babolani di Montauto family. 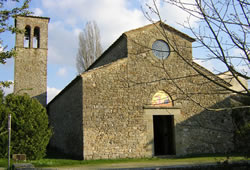 Villa La Barbolana
The manor house of Barbolana, positioned ideally for its views, was the wish of Federico di Antonio Barbolani and was built between 1565 and 1582. It is an unusual, fortified, square villa with bastions that slightly jut out on each corner and a particularly tall central tower.Is surrounded by a moat with two bridges giving access. 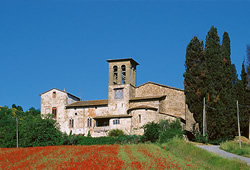 Inside there are vaulted ceilings, terracotta floors and renaissance stone door frames. On the ground floor there is a little 18th century chapel
The villa was modernised in the 19th century when Carlotte Barbolani married Simone Francesco Velluti Zati, Duke of St. Clemente.