Bagno a Ripoli rises in the south-eastern part of Florence, along the area extending between the Arno and the Ema rivers. 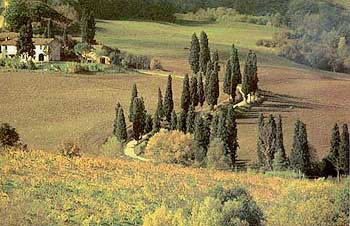 Bagno a Ripoli rises in the south-eastern part of Florence, along the area extending between the Arno and the Ema rivers.
The local economy is active in the agricultural field by the production of cereals, fruit, vegetables, olives and oil. Remarkable is also the activity of the electromechanical and dockyard industries.
The place name comes from a compound name of "Bagno" (bath), with reference to some ancient bathing thermes, and of "Ripoli" coming from the Latin word "ripa" that literally means "bank".
The first settlements in the area of Bagno a Ripoli formed in the Age of the Etruscans, who gave it the name "Marm".
In the III-th century B. C. Bagno a Ripoli was an important trading centre, known as "Quarto" because the town was placed along the so called "Via Cassia" four miles away from Florence.
During the XIII-th century the Legacy of Ripoli formed comprising some close territories and it had some administrative and militar functions.
The Legacy of Ripoli was one of the seventy-two communities in which the Florentine countryside was divided.
At that time the main economic means came from agriculture thanks to both the fertility of its lands and the closeness to the rich market of Florence. Later the wool manufacture also developed. 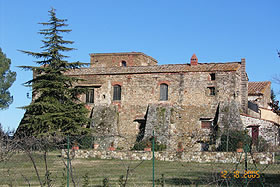 Bagno a Ripoli, being a Florentine domain, experienced all political events interesting the Florentine Republic, mainly the internal conflicts between the Ghuelph faction (Papacy's supporter) and the Ghibelline one (Empire's supporter) that only ended with the coming of the Medici's family to the power.
Since the XV-th century some works for the reclamation of the territory was started and thus Bagno a Ripoli enjoyed a great prosperty. The town was considered particularly suggestive for its landscapes and so it was enriched by building numerous villas and gardens.
At the end of the XVIII-th century the Lorena's Dukes succeeded to the Medici's Grand Dukes to the power. The Lorena's Dukes held their power for more than a century.
In 1861 Bagno a Ripoli was annexed to the Reign of Italy by the King Vittorio Emanuele II of Savoia.
Among the most interesting monuments to see in Bagno a Ripoli we point out here the Chiesa di San Pietro (Saint Peter's Church), the Oratorio di Santa Caterina (Saint Catherine Oratory), the Chiesa di Santa Maria a Quarto (Saint Mary Church in Quarto) and the Palazzo Pretorio (Praetorian Palace).
Among the several celebrations periodically taking place in Bagno a Ripoli we remind here the "Palio delle Contrade" (Race of the Districts) held yearly on the second Sunday of September.
The celebration consists of a parade of noblemen horsing, ladies and men waving flags in Medieval costumes and the traditional "Star Tournment" (the participants try to put their swords in a star holding by a lion's feet).

Bagno a Ripoli: discover the surroundings