Located in the middle of a wide countryside, interrupted by suggestive views of the coast, Bibbona represents a destination that really permits to live a holiday in a deep contact with the nature. 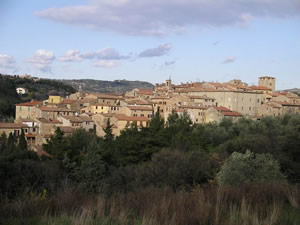 Located in the middle of a wide countryside, interrupted by suggestive views of the coast, Bibbona represents a destination that really permits to live a holiday in a deep contact with the nature. The typical Medieval Village of Bibbona, characterized by narrow alleys, steps and arches, that bring us back in the past, is located few KMs from the sea, surrounded by the typical hilly villages of Bolgheri, Castagneto Carducci, Campiglia… The village has ancient Etruscan origins, to which is dated the “Capro”, an original bronzed statue, become symbol of the town, and nowadays kept in the Archaeological Museum of Firenze. Within the small centre we can find the Castle of Bibbona, enclosed by the majestic walls and the Church of San Ilario, dated 1175 and enlarged in the following centuries, that constitutes one of the few Romanesque churches conserved in this area, the only one saved from wars and raid of pirates.
It was built with local stone and inside conserves a marbled stoup and some paintings dated XVI° century, like a cloth depicting San Ilario and San Bartolomeo.
The Church of Santa Maria della Pietà dates 1482, at the bottom of the Castle of Bibbona, was built to house the venerate St. Mery’s image, who made miracles, painted on a rock under the castle, to which Girolamo Savonarolà dedicated a poem. The particular Latin epigraph “This is a terrible place” on the façade (quotation of a biblical verse) and the plan of a Greek cross, that recall the Church of Santo Sepolcro in Gerusalemme, are even today at the centre of studies and researches. Very interesting also the presence of a grave of a Knight of Tau in the center of the nave. It seems that the designers were Ranieri Tripalle and Vittorio Ghiberti, and that also Leonardo da Vinci contributed to design the church.
Near the new Townhall we find the Fonte di Bacco, that includes the ancient Arch, where are still visible some mysterious symbols. From here the water came down and raised the faucet of the Bacchina and the Bacco, depicted with bunches of grapes in the hairs and a flask in a hand, and ended up in the wash-tub and in the trough situated below. 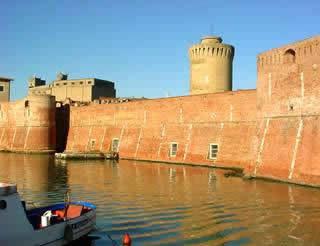 History of Bibbona
Bibbona has old origins and the first inhabitants date back to the Stone Age, followed by the Etruscans, whose many interesting finds are still preserved such as a VI° century b.C. grave. During the Middle Ages Bibbona become one of the most important and competed castle of the Maremma, and Pisa, Volterra and Firenze had fought each other for it.
Towards the XI° century a lot of the lands were granted to the Earl Della Gherardesca, already owner of many Tuscan territories. Later Bibbona become a free city-state under the republic of Pisa until 1406, when it was subjected under Florence’s power. His original laws, which rule the city-life, remained in vigour until the end of the 1700.
Bibbona lived a very flourishing period until 1549, when the lands belonging to the community were ceded to the wife of Cosimo I de’Medici and the inhabitants of Bibbona were obliged to pay the rent called “terratico”. Living standards worsen drastically and this was the beginning of the decline of Bibbona, marked by epidemics and pirates’ incursions that caused the depopulation.
Towards the end of the 18° century, there was a big improvement with the drainage of the swampy areas thanks to Pietro Leopoldo II. Only in the 1789 the lands returned to the city-state of Bibbona, but sold to the richest owners, which improved the yield from the land but not living standards. Nowadays Bibbona, that include the small outlying ward of La California and the seaside resort of Marina di Bibbona, is considered one of the greatest hilly region that bases his economy on tourism, agriculture and different handcraft-activities. 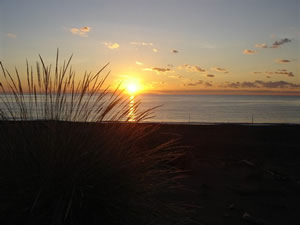 Marina di Bibbona
Thank to the mild climate, to the quiet and beauty of the landscape, Marina di Bibbona became a well-known seaside resort for a relaxing, funny holiday immersed in the nature. Called also Marina del forte, assumed this name from the Forte di Bibbona, a fort built in the 1785 as patrol point and defence of the coast from the pirates invasions.
Nowadays it’s partially used as expository space for fair and cultural events during the summer. The true jewel of Marina di Bibbona is its coastline, that includes wide thin sandy beaches, the “Tomboli”, typical vegetation of Mediterranean bush and the characteristic coastal dunes. The “tomboli”, formed during last century, have the function of sheltering inland cultivated areas from sea winds and are constituted by a low vegetation that divides the beach from inland. Marina di Bibbona is located just in the centre of two beautiful pinewoods that embrace the coastline in the northern part until Marina di Cecina, important tourist resort and in the southern part until Marina di Castagneto Carducci.
The pinewood is the ideal place to spend days in the refreshment of an extraordinary thick vegetation, organize funny pic-nic or walking, cycling or riding in the small tracks, followed by a pleasant fragrance of pine-trees. Long beaches lies of an unpolluted sea, some are equipped with bathing resorts and some free, they included 6 places of daily assistance to tourists. A space of the free beaches is reserved to dogs. The important award of the Blue Flag guarantees the cleanness of water. Ideal place for those who love water sports and bathes.