Borgo San Lorenzo which is the most important centre of the Mugello, rises at the widest part of the Sieve Valley. 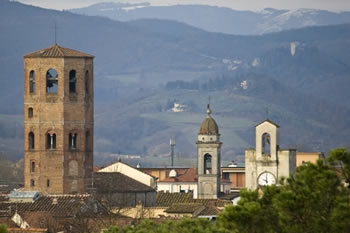 The town, which is the most important centre of the Mugello, rises at the widest part of the Sieve Valley. The original town was formed around the court of the Ubaldini, where the Roman hamlet of Annejanum rose in ancient times.
Towards the middle of the 10th century a part passed under the rule of the Florentine Bishops to which it rebelled in 1273; then it was proclaimed a Commune.
It was a theatre of struggles between the Guelphs and the Ghibellines followed faithfully by the alternate fates of Florence.
In 1351 the walls and two gates (Porta Fiorentina and Porta dell'Orologio) of which very little remained were constructed. In 1440 the town was besieged by Niccolò Piccinino in favour of the Albizi; in 1527 it was a fortress against the French.
The town was modernized and improved during the period of the Grand Duke to whose administration the town complied.
In 1913 it was the seat of the first Agricultural Industrial Exhibition of the Mugello and the Sieve Valley. It was semi-destroyed by the earthquake in 1919. 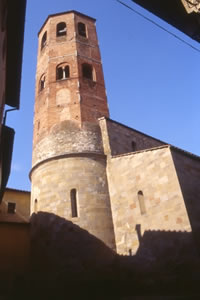 S. Lorenzo Parish Church
In the centre of Borgo San Lorenzo we find S. Lorenzo Parish Church, built in 941. It is the biggest Romanesque construction in Mugello. It was rebuilt in 1263 and this seems to be the date of construction of the bell tower, set on the semicircular apse and built in brick in the shape of a semi dodecagon. The magnificence of the works of art held within the church is testimony of its past importance. Among these we find: Madonna, attributed to Giotto, a panel of the Crucifix from the school of Giotto , Madonna on the Throne with Child by Agnolo Gaddi, The Virgin and the Saints Francis and Domenicby Matteo Rosselli. The apse holds the frescos of Galileo Chini. On the right side of the façade, we find a tabernacle in polychrome terracotta by the Chini Furnace.

Cappuccini di San Carlo Convent
Near Borgo, on the road to Scarperia and Luco di Mugello, stands the Cappuccini di San Carlo Convent, which dates back to 1613. At the entrance we can admire a Pietà in terra-cotta produced in the Chini Furnace of Borgo San Lorenzo, while in the refectory there is an Annunciation in terra-cotta by Galileo Chini. In the cloister we can also admire a 33 metre well which was drilled in 1617.