The circuit of strong defense walls, the architectural style of which recalls that of Siena, once enclosed the entire village of Buonconvento like a cocoon around a butterfly. 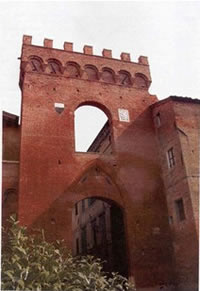 The circuit of strong defense walls, the architectural style of which recalls that of Siena, once enclosed the entire village like a cocoon around a butterfly.
It had no openings other than two gates with thick wooden doors with iron fittings: Porta Senese on the northern side, toward Siena, and Porta Romana on the south, destroyed in 1944 by the retreating Germans.
Remaining intact for centuries, protected by the moat and the Guelf battlements of the watch walkway, the village underwent great transformations in the 1800s, with the construction of buildings just outside the walls, including the Teatro dei Risorti.
Inside the walls, the village is crossed from north to south by Via Soccini, the old family whose members included a couple of heretics, who contested a number of church doctrines in the 16th century.
The street on which "Socianism" was born, so to speak, is also the most aristocratic street in Buonconvento, that upon which the palazzi of power and of the biggest property owners were built.
Foremost is the Palazzo Podestarile, with the 14th-century rectangular civic tower and the two Gothic arches in the façade, which has 25 stone coats of arms of the old podestas.
One then comes to the Palazzo Comunale, or Town Hall, with its attractive brick front, and the imposing Palazzo Taja, built entirely in brick in the latter half of the 1700s by a noble family. On the southern side the façade is enlivened with a large balcony with a wrought iron railing and a sundial above.

Across from it is Palazzo Borghesi, built in the 14th century, which belonged to an old Sienese family whose coat of arms can be seen on the splendid façade.
Nearby is Palazzo del Glorione, which in the past belonged to the Santa Maria della Scala hospital, which used it as both a hospital and a hospice, as the Via Francigena passed by here. Today the ground floor houses the Museum of the Confraternity of Mercy, with the interesting Oratory of San Sebastiano, dating from the 16th century (note the wrought iron gate, a small masterpiece of craftsmanship).
Across from it is the Church of SS. Pietro e Paolo, which also has a fine brick façade. Its current classical style is the result of restoration work in the 1700s. A small marble stone bearing a cross and inserted in the wall to the left of the façade is engraved with the date 1103, which could be the date of its founding.
The emperor Henry VII died in this church in 1313. The important art works by top Sienese artists such as Duccio di Boninsegna that were originally located here are now in the Val d'Arbia Museum of Sacred Art, which is further down the Via Soccini, in the 19th-century Palazzo Ricci-Socini. In 1907 the Ricci family decided to restructure the building in following with the modern floral style, entrusting the project to the architect Gino Chierici, who tastefully created right in the historic center an elegant façade that combined Classical with Art Nouveau, with excellent decorations inside as well.
There are two other important streets in the old town, one on the east side called Via del Sole ("Sun Street"), and the other on west side called Via Oscura ("Dark Street"), both communicating with Via Soccini and, like it, paved with stone slabs.
The buildings on Via del Sole are more modest, and until the 1930s they were lived in by families of carriers, carters, people who transported goods. The initial stretch of Via Oscura has many overpasses with intermittent tunnel arches that create an atmosphere of light and shade. This area is called "chiasso buio" and is the most characteristic neighborhood, with part of the street paved with medieval cobblestones.

But Buonconvento also means Art Nouveau, a typically urban style which for some strange reason took root here as well, bringing the village to the attention of the art world. The Art Nouveau in Buonconvento was anything but provincial, and evolved into a calm, elegant style, that played on materials, colors and decorative effects, on both exteriors and in the decoration of interiors dominated by floral patterns, well represented in the frescoes, stained glass and wrought iron work. Beautiful examples of this style are the previously mentioned Palazzo Ricci-Socini; Palazzo Farnetani on Via Soccini 51; Palazzo Ricci on Via Roma 3; the Grisaldi del Taja nursery school on Via Dante; Palazzina Sensi; and Palazzina Castellani Bettarini, on the same street.
Lastly, on the Cassia road going toward Rome, Villa Rondinella stands on a small hill. Designed by Gino Chierici (1910), it is richly decorated and built with fine materials.