Buti, is a small town on the eastern slopes of the Monti Pisani. 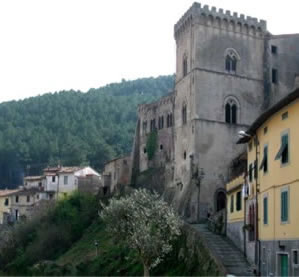 Buti, is a small town on the eastern slopes of the Monti Pisani. Its origins go back a very long way, probably to Roman times although very little evidence remains since Buti was razed to the ground or burnt down and built again several times over the centuries during wars among nearby Pisa, Lucca and Florence.
The earliest reliable mention of Buti, in which it is reported to be surrounded by fortifications or ‘castles’ (Castello di Panicale, Castello di Farneta, Castello di S. Stefano in Cintoia, Castel di Nocco, Castel Tonini, Castel S. Giorgio and Castel S. Agata), goes back the year 1000. Some of these castles are now in ruins but others still reveal their Medieval structure.
For example, Castel Tonini still towers over Buti and the surroundings are in fact called “The Castle”. You can still see the gateway, beyond which are several attractive 16th and 17th century houses. One of the most interesting is the Tonini villa, built by the Medicis around 1550 and known as “Villa Medicea”, frescoed inside by Giarré.
If you take the path down from “Castello” you soon reach the centre of Buti and the church of St. John the Baptist. This too has ancient origins but was rebuilt and enlarged at the beginning of this century.
During the 13th century, when Pisa ruled Buti, there were eleven churches. You should visit the Romanesque churches of St Francis in Piazza S. Francesco(town centre) and the Ascension - also known as St. Mary’s of the snow, outside town on the road to Monte Serra. You reach it by following Via dei Molini - its name means ‘Mill Road’ because there are several water mills along it. The Church of the Ascension is on the site of the old Castle of Panicale and was probably built in the 13th century. Flanked by stone houses, it has one nave and a beautiful semicircular apse in the east wall, as well as intricately carved lintel stones over the doors.
Another interesting building in the town centre is the Francesco di Bartolo Theatre . Francesco di Bartolo (1324 - 1406) was the first person to write a comment on Dante’s famous Divine Comedy. The theatre, which is very small, was built in 1842 in the style of early 19th century Academy theatres. An arched foyer leads into an oval pit. with two tiers of boxes overlooking it. There was once also a curtain painted by the celebrated 19th century painter, Annibale Marianini, depicting the deeds of the heroine, Paola da Buti.
Buti today has a population of 5,500. It is made up of two hamlets, Buti and Cascine di Buti, connected by a road running alongside the Rio Magno, through La Croce. If you look up to your right while travelling along this road towards Buti, you will see the Villa of Badia, the name of which reminds us that on this site there once stood a monastery, the Abbey of Cintoia which, in the 12th century, belonged to the Camaldolese friars and was very important. Over the centuries, however, it fell into decadence.
Many of its old traditions are kept alive in modern Buti. One example is the art of extemporising poetry, another the ‘Maggio’ which is folk drama based on stories saints’ lives or melodramatic legends. It is an authentic example of folklore and is still very much alive in Buti today.
Another event which is followed with great enthusiasm is the Saint Anthony Palio, held on the first Sunday following 17 January. The town is decked out in buntings, each quarter displaying its colours; there is a procession, with people wearing their colours and then, in the afternoon, horse racing with the ‘Palio’ as a prize for the winning horse, jockey and quarter.
Another reminder of the past is the traditional Chestnut Fete (Sagra delle Castagne) held every year on the third Sunday in October. The chestnut farming- wood for furniture and , baskets and chestnuts for food - were once a basic ingredient of daily life here, going back to the times when Buti was founded and was particularly florid during the times of the Grand Duchy of Tuscany (16th - early 19th centuries). Production of our superb quality extra virgin olive oli is still today an important and thriving resource here in Buti.
Buti, which boasts a wide number of clubs and societies and a whole series of fetes and celebrations all the year round (e.g. the frog eating fete in June at Cascine di Buti), as well as an excellent theatre season and an annual contemporary art exhibition, is an interesting, stimulating place to be; it is also attractive to visit and to live in, surrounded as it is by thick pine and chestnut woodland, ideal for walks along the signposted mountain paths or for bicycle rides along the 25 km bike paths recently laid down by the town council.