Camaiore is a city-states with more than 30.000 inhabitants; this area comprehends the territory from the Apuan Alps to the Tyrrhenian in the heart of a charming neighborhood rich of traditions: Versilia. 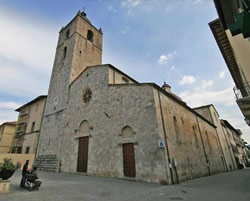 Camaiore : The town hall
Camaiore is a city-states with more than 30.000 inhabitants; this area comprehends the territory from the Apuan Alps to the Tyrrhenian in the heart of a charming neighborhood rich of traditions: Versilia. This territory is theoretically divided in four sub-regions: le hills of Seimiglia, Camaiore and its valley, the vale of Capezzano, and the coast of Lido di Camaiore. It's very rare to find other places in the world like this, where there are so different and beautiful landscapes and backgrounds: from the sea to the hills, from the mountains to the lake, from the beach to the park of the Apuan Alps.The municipal territory includes 24 outlying administrative divisions of the municipality. The most important and populated are Lido di Camaiore, famous seaside resort, known for his beaches and Capezzano pianore, which in the past was celebrated for the production of strawberries and today is recognized for the vanguard floriculture in the E.U. . The towns on the hills are important also because of their history, their traditions and the breathtaking landscapes. 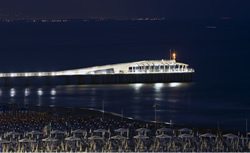 The beach : Lido di Camaiore
Lido di Camaiore spreads out for more than four km along a coast of fine sand. Since the beginning of the last Century, Lido di Camaiore has been one of the most renowned seaside resorts in Italy. Gabriele D'Annunzio was the first to prefer this place to crown his love with Eleonora Duse. In the same estate "Consigli" where the poet lived his delightful moments, - in a second time renamed Rolandi Ricci - then came also illustrious guests like king Vittorio Emanuele III and Guglielmo Marconi. The real boom rose after the second World War, when Lido became one of the favorite destinations for the large national and international tourism.

From the hotels on the sea (5 four stars hotels, 46 three stars hotels and a lot of other guesthouses) to the bathing establishments (altogether 97, with a lot of comforts and services), Lido has today everything for those tourists who need to spend a relaxing and comforting holiday with all the family. Plus, there is a large range of possibilities offered by the neighborhood: the mountains and the cultural cities as Lucca, Pisa and Florence. The beach is large and comfortable and just beside the bathing establishments, there is a wide choice Of shops and pubs for having fun during the night. Furthermore, the town council has recently arranged a tract of free beach in front of Piazza Lemmetti, with showers, toilettes and beach umbrellas, in order to let everybody enjoy the pleasure of the sea and the sun. 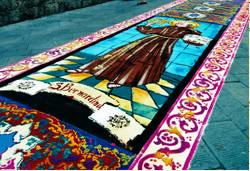 The hills
The hills of Camaiore represent a real paradise for the excursionists. These promontories are the ideal destination for those who love nature and for those people keen on art and history. Nature lovers can chose among a wide range of tours on the Apuan Alps and the view of the typical little hill towns: for example the panoramas from the ancient suburb of Monteggiori, or from the village of Casoli, are unforgettable. Here tourists can taste the rediscovery of ancient traditions: Gombitelli is a little suburb acknowledged for its typical dialect and for the craft made production of nails and for the various kinds of cold meats and salami. An attractive route is also "l'itinerario degli opifici" (the itinerary of those ancient mechanical machines started by the flow of the waters) along the torrent Lombricese. For those who love the beauties of art and history there are a lot of spaces to visit also: the Pieve of Camaiore (wonderful example of Romanic church, realized on the basis of another consecrated place already known in the year 817), the Gello abbey or other monuments, for the most part religious ones, which reign numerous in the hinterland of Camaiore.