Campiglia Marittima, maintains intact many aspects of the medieval town. The built-up area is dominated by the Castle built perhaps between the 8th and 9th centuries. 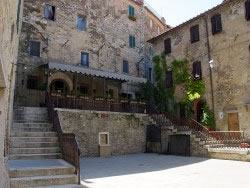 Campiglia Marittima, maintains intact many aspects of the medieval town.
The built-up area is dominated by the Castle, built perhaps between the 8th and 9th centuries but then rebuilt between the 12th and 13th centuries.
A part of the medieval walls is still visible, and the North Gate and the Florentine (or St Anthony) Gate are original of the era, decorated with the stone coats of arms of Pisa, Florence, Campiglia and of the Gherardesca counts.
More or less in the centre of the village rises the Praetorian Palace, remodelled several times and the facade of which abounds in stone coats of arms of the podestas of the 15th and 16th centuries. Inside the palace can still be seen the so-called "torture chamber", that is, the room in which prisoners used to be tortured. Precisely on the left side of the Praetorian Palace opens up a wider part among the most interesting in the historic centre of Campiglia, with stone edifices with small balconies and outside staircases, medieval arches and narrow alleys. 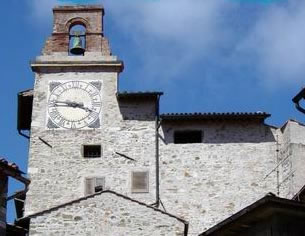 A short distance form the Florentine Gate is the Church of St Anthony, founded in the Middle Ages but remodelled during the following centuries.
The most interesting church in Campiglia is located a short distance from the built-up area, on the road that leads to Venturina. The parish church of St John, clearly Romanesque in style, was founded in 1163 and retains a lovely 12th-century altar. Outside on a lateral flank of the church there is a beautiful portal with the architrave decorated with a hunting scene from the end of the 12th century. Legend has it that the birth of the parish church can be traced back to the discovery of the mortal remains of St Florentius. Hotly contested between the inhabitants of Campiglia and those of Piombino, the remains were laid out on a cart drawn by oxen. The oxen set off towards Campiglia, and stopped in the exact place where today the parish church rises. The body of the saint is conserved at present inside the Church of St Laurence, the parish church of Campiglia. The Etruscan vestiges in the territory of Campiglia Marittima can instead be traced back to the territory currently included in the "Parco Archeominerario" of San Silvestro. The fortified village of San Silvestro, between Campiglia and San Vincenzo, was founded in the 10th century.