The town of Camporgiano is in the province of Lucca at 475 m. a.s.l. of altitude and it has a population of about 2,000 inhabitants.

The town of Camporgiano is in the province of Lucca at 475 m. a.s.l. of altitude and it has a population of about 2,000 inhabitants. The Rocca degli Estensi and the Church of the Madonna, built in 1627, can be visited in its territory.
Populations descending from the Osci and the Ausones crossed the area of Camporgiano before the Etruscans settled here (even if their noteworthy evidences have not been found) and the Romans conquered it later. An alcove dedicated to the god Janus, set on the plain to the right of the Serchio rover, has remained. Sulla's veterans founded the colony of "Camporiano", so called after the name of the god, and they were assigned some land at the end of the civil war against the Mariani in 82 B.C. Spanning the year 0, the Roman "castrum" experienced a phase of such expansion that it was cited in some tables of Lucca dating to 111 a.D.
The area depopulated after the Barbarian invasions. An actual recovery took place around the year 1000, thanks to the economy linked to the activities based on the exploitation of the river. In the Early Middle Ages, probably around the VII century, the nucleus of Camporiano was moved to its current position, maybe because of an earthquake that destroyed the original built-up area. Around the XIII century, the town was very active in supporting the Guelfs against the Ghibellines of the Garfagnana. The latter, yet, are the majority and when their leader Castruccio Castracani got the power in Lucca, Camporgiano changed sides, too.
After Castruccio died, the town supported the Guelfs again and around the year 1360 its area was raged by the war caused by the Malaspina, another powerful family belonging to the Ghibelline party. Thus, the more violent period in the Garfagnana began and it was characterized by the depopulation of Lucca and by the diffusion of brigandage and the growth of overbearing local seigniories. The towns of the Garfagnana called the Estensi, a family who dominated the area corresponding to Ferrara, Modena and Reggio, to settle the disputes. The Estensi annexed four vicariates of Lucca, one of which depended upon Camporgiano. In the following years, many owners followed one another in ruling this area and it definitively went back under the seigniory of Ferrara in 1521.
During the long period under the Estensi's dukedom, also Ludovico Ariosto governed the vicariate. Therefore, he spent some years of his life in Camporgiano. In 1859, the family from the Emilia region decayed with the Risorgimento uprisings and the town, once the Kingdom of Italy annexed it, province of Massa Carrara incorporated the town. A second Royal Decree definitively ceded it to the province of Lucca in 1923. 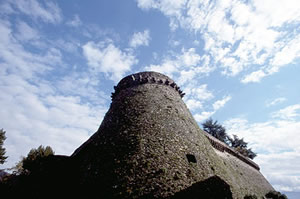 Rocca of Camporgiano
The rocca of Camporgiano is on a high rock overlooking one of the historically most important sections of the road network in the upper Serchio valley. It is closely connected and within sight of the fortress of Verrucole guarding the other road on the further bank of the river.
The fortification has an irregular quadrangular plan and the walls have two massive conical towers that represent the most important and characteristic part of the fortifications; the walls in local roughly hewn stone are crowned by a patrol balcony jutting out of the wall. The fort has only one gate with a small guardhouse, on the north-western side.
Inside the walls we can still see the base of the bell tower of the Romanesque San Sisto church and some portions of the medieval walls that represented the most ancient core of the fortification brought to light during a recent excavation campaign.
The complex owed its strategic relevance both to the solidity of its construction and to its position; however, with the political changes and the period of non-belligerence from the beginning of the XVIIth century onwards in the upper Serchio valley, the Rocca lost its strategic importance and retained only administrative functions. The whole complex then passed into private hands and only the large building on the Rocchetta was refurbished and converted into a house; this was the situation until 1920 when, owing to a devastating earthquake, many buildings were abandoned, their ruins pulled down and a new village was constructed in their place.