Situated at the sources of the Bisenzio river, amid the Tusco-Emilian Apennines, the medieval village of Cantagallo is an excellent base from which to explore the nearby mountains, climbing panoramic footpaths. 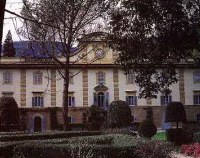 Situated at the sources of the Bisenzio river, amid the Tusco-Emilian Apennines, the medieval village of Cantagallo is an excellent base from which to explore the nearby mountains, climbing panoramic footpaths.

Migliana (603 mt)
We can reach Migliana, little town all set around the Chiesa di Santa Maria Assunta, if we take a beautiful road through forests of chestnuts. From the open space in front of the church, rebuilt after the First World War, visitors can enjoy an excellent view on the Calvana Mountains.
There are two good reasons to visit Migliana: the first one is its panoramic position from which to explore the nearby mountains and second one is its traditional gastronomic festivals, such as the "sbruciatata" (October Chestnut Festival), which takes place in the autumn when the chestnuts are harvested. 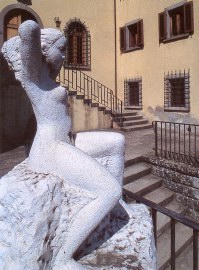 Luicciana (423 mt)
At Mercatale di Vernio turn right to Luicciana, the municipal seat of Cantagallo.
Totally destroyed during the Second World War, the town was rebuilt and recently enriched by a small, open air Contemporary Art Museum, which consists of a number of interesting works of art made by several Italian and foreign artists. 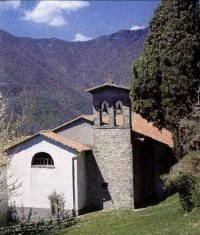 The valley of the Bisenzio

The valley of the Bisenzio is enclosed between the ridge of the Calvana mountains, from which rises in the north-east of Prato the pyramidal outline of Retaia and the woody ridge of the Appennines.It is a territory of ancient culture and traditions, peopled with villages built on roman rural settlements

From the end of the tenth century the important monastic settlements (Vaiano, Montepiano, etc.) covered a propulsive role for the economy of the area in addition to the religious action and the assistance to the pilgrims.

At the end of 1800 there was a remarkable change in the economy with the expansion of the textile industry along the course of the Bisenzio, which brought about deep transformations in the territory. The Alberteschi castles of the territory were numerous although few traces remain by now especially in Fossato, in Luicciana, in Codilupo.  The most imposing remains are Cerbaia and Vernio's fortressess.
Cerbaia
High above the State Road 325, in a position overlooking the valley, stand the impressive remains of the Rocca di Cerbaia (Cerbaia Fortress - 12th-13th centuries), ancient fortress belonging to the Alberti family of Prato. To reach the Rocca take a footpath (CAI 48, marked by red and white bands) across the medieval Cerbaia Bridge (1330), which continues up to Montecuccoli (593 m), a tiny hamlet on the border between Cantagallo and Mugello zones.

The Rocca of Cerbaia, also named only Rocca Cerbaia, dominates the peak of a rocky spur four hundred meters high overlooking the valley of the river Bisenzio. Its origin seems to go back to the beginnings of the 12th century, when the Count Alberti erected on the site a small fortress at control of the ancient road of 'Lombardy', main connection between Tuscany and the northern regions of Italy. Despite its predominantly military functions, the fortress was also for a long period used by the Alberti family as their usual residence, and this is confirmed from the touch of good manufacture still visible inside the keep. The legend, surely deprived of foundation, says that in 1285 the Alberti refused the request of political asylum of the great Poet Dante Alighieri, exiliated from Florence. The same Poet made famous one of the descending daughters of the family, Cunizza Alberti, protagonist of an animate sentimental life in the 'Divine Comedy' (Heaven IX, 13-36). 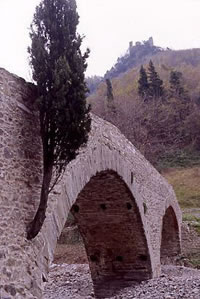 In 1361 the fortress was sold to the Florentine that, due to its important strategic position, garrisoned permanently the stronghold and reinforced its defenses. Rocca Cerbaia has the classical aspect of the italian medieval castle-fence: a mighty Keep dominates from the center two circuits of walled enclosures approximately of square form. The construction, performed in sandstone of which the zone is rich, lies our days in serious conditions of degrade. Nevertheless vast portions of the first wall circuit still remains, with the Main Gate inserted on the south side; just crossed the gate we find on the left the rests of the Chapel of the complex. Between the ruins of the second ward we can notice the cistern, with a barrel coverage, and some other buildings. In the core of the fortification rises the Keep with its central tower, once highest than today, with functions of look-out and are still visibles the breaches of the windows and a piscina on the eastern wall. This was the residence of the castle constable. It seems that this part of the complex has been reconstructed toward the half the 13th century, taking as model the Castello dell'Imperatore (Emperor's Castle) of the near city of Prato. Is not possible to affirm with certainty that this corresponds to truth, due to the actual disastrous condition of the Rocca. Some parts of the ruins, in particular those from the side of the precipice, are yet to serious risk of definitive collapse.Recently the castle has been bought by the commune of Cantagallo, with the support of the province of Prato, for 60 million of Lire and the community is planning the works of restoration and valorization of Rocca Cerbaia. 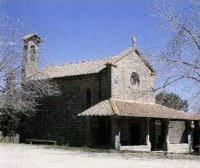 Along the ridges of Buicciana mountain is the lovely natural resort of Acquerino Luogomano. Hikers will certainly love exploring the paths among these mountains, rich in magnificent century old beech, fir and chestnut woods, great views and easy climbs.

But this is not all.

Around here there are restaurants and inns where to eat local dishes and small hotels, farmhouses and alpine refuges where to stay, such as the Rifugio Pacini of Pian della Rasa (1001 mt).

Archaeological research on a site of around 1600sqm has brought to light a large building complex which contains the identifiable remains of a single apse church. The data gathered suggest that the site may have been a well-organised monastic complex which existed in medieval times and disappeared shortly after the foundation of the Abbey of Fontana at Taona at the beginning of the 11th century. 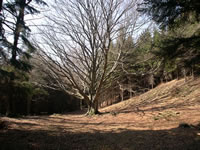