The town of Capalbio is on the coast in the province of Grosseto and it has a population of about 4000 inhabitants. 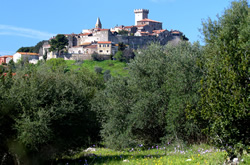 The town of Capalbio is on the coast in the province of Grosseto and it has a population of about 4000 inhabitants. The XII-century parish of San Nicola, the tower Aldobrandesca and the Palazzo Collacchioni can be admired in Capalbio.
The origins of the first human settlements in the area of Cosa (Ansedonia's ancient name) and in Capalbio date to the Etruscan times. After them, the Romans inaugurated the latifundist period in this place and built farms and villas in this territory. Once the Empire fell, the Lombards, first, and the Franks, later, used the lands of Capalbio as pastures, above all, and garrisoned them with the construction of villages and small fortresses.
In the Middle Ages, the territory of Capalbio was a wide area of insalubrious and inhospitable marshes. The powerful feudatory families, who lived in the period after the year 1000, established their seigniories here as well as the Republic of Siena between the XII and the XIII centuries. The few people living inside the castles fought against malaria, cholera, typhus and plague epidemics every day. Despite this, Capalbio succeeded into developing productive and commercial activities that guaranteed the economical survival of the village and of its inhabitants.
The reclamation of the territory always represented the biggest problem. With the arrival of the Medici, who had extended the dominions of their Grand Duchy by including the whole republic of Siena, pinewoods and woods were planted in Maremma with the hope to recover the territory and improve the environmental conditions. Around the XVII century, once the 1555 Spanish invasion had been overcome, Capalbio lived a period of prosperity destined to end soon, though.
The Hapsburg-Lorraine, a branch of the imperial family who carried out the most effiective works of improvement and re-organization, sat on the throne of Tuscany since 1737. Pushed by the Jesuit friar Ximenes's catastrophic relation, the Grand Duke financed a long series of reclamation works that lasted far beyond the annexation of Maremma to the Kingdom of Italy, which was born in 1859.
After the period of the Risorgimento, the phenomenon of banditry developed in this area. It was influenced by the backwardness of the countryside, dominated by the big landowner seigniories of the Ricasoli, the Ponticelli, the Vivarelli Colonna and the Collacchioni.
The latter were also the owners of the Castle of Capalbio. The bandit Tiburzi was a legendary figure in this time and he was much loved by the poor classes of the Capalbio countryside. The progressive impoverishment of agriculture obliged the Collacchioni and the other families to abandon the territory which was taken over by farms. A new development started in 1951 thanks to the foundation of the Ente Maremma.

In Capalbio and Argentario zone you can find the best and clear sea of Italy!
Capalbio, border of Tuscany sea, offers a lot of kilometres of big and wild beach, one of few areas where people and nature can exist in armony.
You can find few seaside resort built in wood, completely in armony with the nature around. Remaining coast (12 Km.) it's free beach.
Further, this area offers the marvellous beaches of Feniglia di Ansedonia and Porto Ercole. Moreover the cliffs of Argentario and the unusued motley beaches from the Island of Giglio; the uncontaminated beaches on Island Giannutri and at the end the marble cliff of Island of Montecristo.

BURANO LAKE
On the fringes of the Capalbio the sea begins the Riserva Naturale del lago di Burano, a WWF oasis and avifauna paradise of great scientific interest.

The woods surrounding Capalbio are ideal hunting areas, a very popular ancient tradition in this territory, especially the boar-hunting. Other naturalistic destinations are the W.W.F. Natural Reserve near the lake of Burano, the sea coast and the very long beach stretching along the thick Mediterranean flora.