Capolona, a city of medioeval origin, extends along the foothills of mountain ranges that determine the bend of the Arno in Arezzo

Capolona extends along the foothills of mountain ranges that determine the bend of the Arno in  Arezzo. Of medieval origin, connected between the two sides of a bridge of Roman origin, Capolona is now the gateway to the Casentino. In the green of the surrounding countryside stands the church of Santa Maria Maddalena in Sietina, documented as early as the eleventh century Romanesque church with three naves, rich in Arezzo frescoes of the school of the fifteenth century. Of particular interest is the Museum of Water and Power Plant Laboratoires La Nussa. 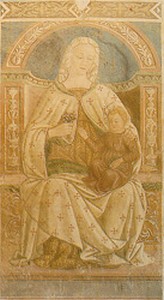 History of Capolona
Capolona is located on the right bank of the Arno river and you can define a good reason the gateway of the Casentino.
The municipal area extends on the southern Pratomagno in the transition zone between the Casentino and Valdarno it borders the municipality of Arezzo.
Because of its strategic location and linking numerous valleys, Capolona and its territory have played and still play a major role in the economy and history of the Province of Arezzo; many, in fact, are the architectural works such as castles, churches, bridges and fortifications testimony of a past rich in history and also events of major importance.
The birth of the village of Capolona dates back to medieval times; the ancient settlement that once stood along the shore Arno connected with the other side of a bridge of Roman origin, restored several times, almost completely destroyed in 1944 and rebuilt, some housing structures remain almost all been restored. It looks right in the main square of the town of Capolona which houses the Town Hall.
Today Capolona is an industrial center and modern-looking craft in continuous and steady economic growth, while preserving the simplicity of all time and the attachment to traditions.
In recent years, tourism has registratoun strong growth thanks to the presence of numerous farms fate in the green hills that characterize the municipal area.
There are numerous opportunities for entertainment and cultural character of the City of Capolona can offer throughout the year to witness an area alive and always looking for something new; the festivals that mark the rhythm of the seasons, the outdoor film festivals and theatrical performances, and for the little puppet shows and workshops, to purely cultural events such as conferences, exhibitions and concerts of various kinds to satisfy young and not so young. 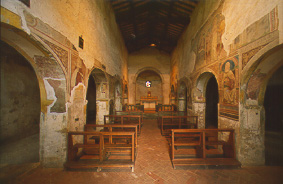 Pieve di Sietina
Located on a plain, near the Arno River, in its right bank.
Only Pieve del Casentino where you can see, even today, the frescoes.
Upon entering, a striking effect raises the prospect that you are offered: the floor, lower than the ground level, and the frescoes, decorated on the walls, causing a strong emotion.
Mentioned already in July 1022 under the name of Santa Maria Maddalena of Setrina, fell in the year 1373 under the rule of the illustrious family of Arezzo Bacci.
Inside the church presents an architectural structure unusual compared to other churches located in Casentino. It has three apses, with three naves separated by four arches raised on columns with rectangular section.
The frescoes were executed in two different periods. A group in the Gothic period, the other during the Renaissance.
Under the fresco of the "Annunciation" is an inscription with the date 1490 and the name of the buyer.

ECO MUSEUM CASENTINO
The water, along with forest cover, is the primary component of the geographical landscape of Casentino; water as a resource to quench the thirst of men and animals, as a means of transportation, such as motive power; for the use and control of water wars are fought, founded and destroyed towns and cities, made ​​mighty works to govern the momentum and use force.
So either the "signs" of the changing relationship between man and the waters first identify the structures of bridges, more or less bold and broad, which arose in the vicinity of the narrows where the bed of streams and rivers was subject to less variability, and intended to connect the valley slopes and to ensure the transit of people and goods throughout the year.
But alongside these structures related to the paths of the earth, are the artifacts associated with the use of water as many of the courses are also suitable waterways to transport timber provided by forests and mountain forests that flowed in the ports of the Abbey of Pratovecchio and Bridge Poppi.
Used instead of water as the driving force and formed a network of factories and production structures of buildings "going to water" as mills, ironworks, fulling mills, saws, spread all over the Casentino.

The museum illustrates the multiple modes of use of water, by feeding an indispensable resource for the production of energy to move machines such as mills, fulling mills, ironworks, etc..
With the illustration of the waters of the valley begins the knowledge of the hydraulic network focused on the course of the Arno River and its tributaries.
The bridges have sprung up to connect countries and inhabited born along the river along with the facilities of the ports are the most obvious of changing man's relationship with the river; but then the presence of the mills, ironworks, fulling mills to reveal how the power of water has been essential to the growth of industrial-manufacturing activities throughout the Casentino valley.
Just the possibility of use of the motive power and the variety of hydraulic machinery moved by water is shown in the section of the artificial machines.
Finally, the physico-chemical properties of water and hydrodynamic principles are in the experimental section of the Laboratory which is attached to the museum.