Surrounded by the fascinating hilly landscape of Montalbano where vineyards and olive groves supply excellent wines and extra virgin olive oil, Carmignano has much to offer.

Surrounded by the fascinating hilly landscape of Montalbano where vineyards and olive groves supply excellent wines and extra virgin olive oil, Carmignano has much to offer: local "trattorie" where to eat traditional dishes, a wealth of farms and "enoteche" (wine shops) where to drink, archaeological sites and magnificent villas to visit, ancient churches such as the Pieve di San Michele at Carmignano (the church of St. Micheal) where visitors can admire the splendid "Visitation" (XVI century) by Pontormo.

Seano
The Quinto Martini Museum Park is a very good reason to come to Seano. Opened in May 1988, when the artist Quinto Martini was still alive, this open-air museum houses a great collection of 36 bronze statues representing all the phases of his long artistic activity. 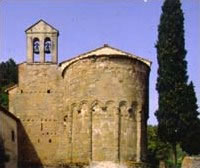 From Comeana the road winds upwards to walled Artimino (253 m). This charming little village, set on the top of a hill, has a rich Etruscan, Roman and medieval heritage.
Just outside Artimino, extended on the plane of the hill, lies the impressive Medici Villa "La Ferdinanda" (also called the "hundred chimneys villa", name due to the great number of chimneys on its roof, each one corresponding to a specific room inside the villa). 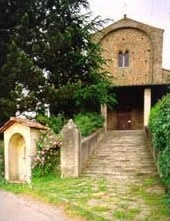 Commissioned by Ferdinando I de' Medici to the architect Bernardo Buontalenti and built between 1596 and 1604, the Villa, where the Medici family used to go during the winter time traditionally devoted to hunting, had just a hunting lodge function.
Therefore, it has no garden and its park is the forest, the wide hunting reserve of Montalbano. Today the basement is partially occupied by the Etruscan Archaeological Museum (open since 1983), rich in Etsruscan finds discovered in the nearby archaeological areas. Beside the villa lies another important Medici building, the Paggeria Medicea.
Once used by the Court staff, the elegant rectangular structure is today an excellent hotel. 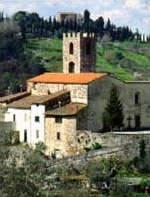 Bacchereto and Capezzana
Bacchereto is a small village well known for its ancient Villa Banci (or Bacchereto farmhouse), today a large estate producing wine and olive oil.
Nearby lie another village, Capezzana, and another beautiful 15th century villa transformed into a flourishing estate producing a range of supremely fine wines, olive oil and grappa. Capezzana is also a farmhouse.