Carrara and the marble quarries

Carrara is in the northen-western area of Tuscany, at the borders with Liguria and Emilia, famous all over the world for its valued white marble.

Carrara:
In the northen-western area of Tuscany, at the borders with Liguria and Emilia, lies Carrara, famous all over the world for its valued white marble. It is the town of white marble, of the contrasts between the colours of the Alps and the sea and of the many artists, who, through the years, have chosen its fabulous marble to realize the most beautiful artistical works in the world. A small town, which is characterized also by its inhabitants: anarchical spirits (simple people but great workers,because working in the quarries “is no kidding!”) with a great personality, talking a particolar dialect (called “carrarino” and not “carrarese”as it should be in correct italian language)which does not even resemble the “classical” Tuscan.
The marble quarries are situated on the Apuan Alps overhanging Carrara and in a great part of the territory of Versilia. The marble basins had been exploited since the roman age, when huge stone blocks, loaded on big ships, sailed from the port of Luni to Rome. From those blocks were born architectural works and every kind of sculptures which were placed all over the Roman Empire and, today, all over the world.
The name “Carrara” probably comes from the ancient word “Kar” which means “stone”. The town has medieval origins: in that period, because of the decadence of the port of Luni and the menace of the barbaric invasion, the populations were compelled to move towards the inland. Carrara is surrounded by small mountain towns, in which, in particular in the last century, the quarrymen lived. Carrara reveals a stunning contrast to the tourist’s eyes: a sea town surrounded by white mountains, which are often believed covered of snow, instead of made of marble.
The port of Marina di Carrara – one of the most famous and dynamic port of Italy- is the most important port in the world for the loading and unloading of marbles and granites. Along the coast several bathing establishments colour the golden beaches, framed by green pine-woods, which surround also the huge expository area of the town. In this area are prepared several fairs and reviews, the most important of which is the "International Fair for Marble Machinery and Services" hosting every year a great number of operators of this area from all over the world. So, Carrara has became a world-wide fame centre of trade and manufacture of marble. Students from every part of the world attend the lessons of the Academy of Fine Arts, founded in the far 1757 by Maria Teresa Cybo, Duchess of Malaspina, where there is a qualified school of sculpture.

Sightseeing in Carrara:
Piazza Alberica. It represents the heart of the town. At its centre it is possible to see the statue of Maria Beatrice d'Este, beloved queen by the population of Carrara. In the perimeter lie refined buildings of the XVII and XVIII century among which it is particularly beautiful the red coloured “Palazzo del Medico”.
The Dome, a precious building, which has been started in the XI century and finished after three houndred years. It has a rectangular plant with a nave and two aisles and it is built in different styles, among which the roman and the gothic ones. The front with its wonderful marble rosette is particularly valued as the many inner details as the marble statue of St.Maddalena and Lucia, various kinds of holy-water fonts, the pulpit made of coloured marbles, the main altar of the “Santissimo Sacramento”, a nice wooden Crucified of the XIII century, the fresco paintings on the walls at the sides of the altar and other wooden statues.
The Santuario delle Grazie, of the XVII century. Its front has a modern lining, but the inside is sumptuous and baroque. The altars are particularly beautiful.
The Academy of Fine Arts, a tall building with wide rooms, hosting today a rich gallery of plaster, showing collections and plaster moulds of masterpieces as the statue of “Napoleon the Great” by Canova.
Marble and quarries
Marble is a crystalline structured calcareous stone formed through metamorphism. Apuan Alps are a huge marble deposit with a volume of several cubic kilometres. Carrara reveals to be the widest pool and has three main dales: Colonnata, Fantiscritti and Ravaccione where, besides the ordinary white marble, different variations of marble are extracted as the statuary, veined, purple, “calcata” and “bardiglio”.
The mining activity has ancient origins (II cent. b.C.): it was developed by the Romans, who largely used our marble to build their villas and monuments and kept on growing to reach the present industrial development. Today, thanks to the improvement of techniques, materials, tools, Carrara’s basins produce about 800.000 tons of marble a year.

The cut:
Marble is used in various, different ways: to produce decorative objects, sculptures, monuments, and obviously to produce linings and covering. Marble economy is based principally on decorative furnishing area. But the marble, after its extraction from the mountains, needs to be cut and polished through long and difficult working practices. In the past the huge marble blocks were hand-cut with a unique blade, which penetrated slowly into the stone. Later water-looms were used to cut the stones, obtainig square marble pieces called “quadrette”, “ambrogette” or simply tiles, which, afterwards, were hand-polished. The technological development helped men’s work: thanks to the building of special water machines called “frulloni”, it was possible to polish the products in a simpler way (not only by hand). Today the sew-mills make quarrymen’s work safer and lighter. 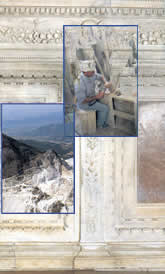 The artists:
Without man’s hand moulding sculptures and monuments, marble will be just a cold shapeless white stone. Ancient Romans preferred the white marble to decorate their houses and to celebrate their glory, building wonderful monuments, villas and public structures. For this reason Carrara has seen the birth of several generations of sculptors, stone-cutters and artists, who learned to know, to work the white stone and to turn it in a work of art. Several unknown artists have left traces of their work in the streets, square, churches and so on.
They contributed together with more famous artists, to decorate, and enrich the severe buildings and, as the great master Michelangelo, to create fabulous statues, so “alive” than they seem to have a soul. 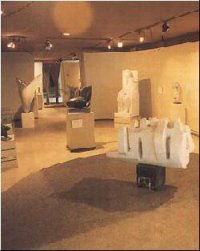 Civic Marble Museum
The Museum of marble was founded in 1982 thanks to the support of the city council. The Museum aims at collecting documents and testimonies on the local culture relating to marble in order to preserve them and have their value increased.
Over the years, the museum has become the venue where the city's historical legacy is enshrined, thus providing scholars with valuable material for thei studies.
Archaeological finds, written documents, photographs; machines for marble processing, castings, educational models, and marble samples: thanks to the items it holds, the museum allows for wider knowledge of the world of marble as seen from different angles and from different educational standpoints.
The institution also works as a stimulating mixing of material culture, historical legacy and cultural testimonies.