Numerous building of architectural interest rise in Casciana Terme territory, such as the church of Santa Maria Assunta. Yet, the town is famous for its baths, above all. 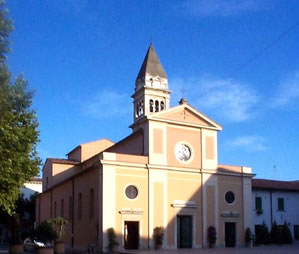 The town of Casciana Terme is in the province of Pisa and has a population of about 3,000 inhabitants. Numerous building of architectural interest rise in its territory, such as the church of Santa Maria Assunta. Yet, the town is famous for its baths, above all.
Around the IV century, a village called "Castrum ad Aquis" already existed and this leads to think that the remarkable properties of its bath had already been known since the remotest times of the Middle Ages or even before. Until the XII century, the territory was included in the estate of Count Ugone. Then, it was given to the church of Morrona and to the Camaldolese friars, until the latter ceded it to the archbishopric of Pisa in 1135.
Since the XIV century, the village had to deal with the war between the Pisans and the Florentines who took it by storm and set it on fire in 1362. Lastly, in 1515, Casciana entered the Republic of Florence at the time the Grand Duchy was extending to towards the modern provinces of Siena and Pisa. During the Grand Duchy era, Casciana was added to the Vicariate of Peccioli and, later, to the Vicariate of Lari in 1776.
From this moment on, the tourism growth of the town started and it attracted the noble and wealthy families from all around Italy thanks to the Spa and to the thriving of the accommodation activity. The construction of the Gran Hotel delle Terme, inaugurated in 1012, was particularly important. In 1927, Casciana Terme definitively acquired its status of autonomous town.
The development of the thermal activity was due to Matilde di Canossa, above all, to whom one of the two springs is dedicated. The countess also became famous for hosting the historic meeting between Pope Gregorio VI and Henry IV, during which the emperor humiliated himself and kneeled at the feet of the pope. The legend tells that this noble woman had a blackbird that was very ill and that it recovered after it submerged in the hot waters of the thermal springs near the house of the countess. That was when she discovered its properties and settled them to be restored.
Actually, the Romans probably already knew the baths that were also known before the XII century. Federico di Montefeltro built the first establishments in 1311 and both the Medici and the Lorraine restored and improved them. Moreover, in 1870, the architect Poggi, the famous relizer of Piazzale Michelangelo in Florence, worked on new modernization projects of the structure.
Today, the baths are constituted of two springs. One is called of the "Mathelda" and the experts consider it as one of the best of the peninsula for its therapeutic properties and it spills out at a temperature of 36 ° C. The other one is called "San Leopoldo" and is used for mineral water cures. 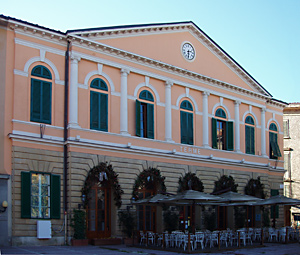 Casciana Terme Spa Village
Set in the enchanted beauty of the Tuscan hills, with its over one thousand years of history Casciana Terme is one of the many small masterpieces that the people of Tuscany have over the centuries helped to build and to preserve.
Hard-working people, a cuisine which preserves the authentic quality of the local products, a landscape of vineyards producing wines of quality above suspicion, which are today attracting the notice of the leading Italian viticulturists and wine experts.
At the centre of Casciana Terme is the Piazza, since time immemorial the hub of town life and the many events which go on here, a place to gather for a chat, have an aperitif at the Gran Caffè or at Zia Bruna’s, where designer clothes and casual wear mingle with perfect ease.
Besides the façade of the church, which occupies one side, the main feature of the piazza is the frontal of the Terme di Casciana, designed by the architect Poggi in 1870.
Terme di Casciana is a place in which to enjoy well-being independent of one’s individual needs: psychophysical well-being or classic spa treatments, to prevent or treat pathological conditions or undertake motor rehabilitation for those needing to recuperate after injuries or surgical operations of any kind.