Castelfiorentino is situated in an optimous position on the Chianti hills, in the heart of Tuscany. 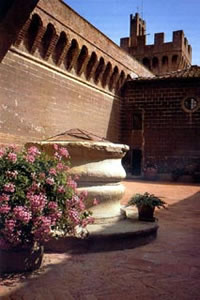 Castelfiorentino represents Valdelsa's natural crossroads.
It is situated in an optimous position on the Chianti hills, in the heart of Tuscany.
In the last few years the town has witnessed a great increase in its population, so much that it has become an important reference point for the area's tourist trade economy. This is exactly why Castelfiorentino's local administration decided to dedicate to tourists this section of its web-site, making it easier for them to find their way around the town.
Our territory goes proud of its numerous significant masterpieces, such as the frescoes attributed to Benozzo Gozzoli, the Church of S. Verdiana, Oliveto Castle, not to mention the many aristocratic villas built in the areas of Meleto, Granaiolo, Cambiano, Cabbiavoli and Montorsoli noted for their historical and architectural value.
Therefore we are happy to present this web-site to all of you, in the hope that it may contribute to maintain alive a love and attachment for this community and its surrounding territory.

HISTORICAL OUTLINE
Far back in 1149 the name of Castelfiorentino was given to a castle erected along "Via Francigena" (the road used by pilgrims and waifarers, in the Middle Ages, on their way to Rome from the north of Europe), on the site where the Roman settlement of Timignano once stood.
Enclosed within the fortified castle, set upon a hilltop, was the parish church of Sant' Ippolito (the ancient parish of San Biagio); erected within a second ring of the walls were Borgo d'Elsa and Borgo Nuovo.
There were also gateways and towers and two roads which met in a crossroad on the only square present (today' s piazza del Popolo). Ruled firstly by the feudal governors, the Cadolingi and then by the Alberti Earls, the centre was subsequently passed on to the Bishop of Florence during the XII century. This caused conflicts between the Church and the Empire and the powers of Siena and Florence, during this period Castelfiorentino became an important military out-post of Florence. It became the headquarters of a podesta' (mayor) and was awarded the privilege of having a red lily on its flag and the title of Castelfiorentino.
Peace was declared between Siena and Florence after the Battle of Montaperti in 1260. After a brief period of peace, the town became a battlefield full of raids and violent attacks. Infact, in 1521, during a violent attack by the Spanish troops, Castelfiorentino was totally demolished. Therefore the importance of its strategic position diminuished, even though Albert Cosimo I restructured its fortifications. Even its administrative importance became limited due to its dependence on the vicar of Certaldo.
The town blossomed again during the XVIII century, under the leadership of the Grand-duchy of Tuscany, and became the home of the court clerk and the mayor's office, with a municipal guard and a much wider jurisdiction over Certaldo and Montaione.
Following the almost unanimous plebiscite vote, Castelfiorentino happily embraced the Kingdom of Italy becoming the district's chief-town in 1868. It was one of the first country to elect a socialist administration in 1902. 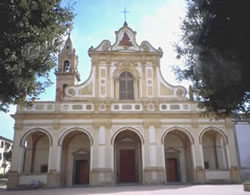 VISIT CASTELFIORENTINO
The large, tree-lined Piazza Gramsci presents itself as an obligatory reference point. There you can see the Teatro del Popolo (Town Theatre), built in the XIXth century. Beyond the centrally situated Piazza Cavour, we arrive to Via Palestro where we find the building of the "Arciconfraternita di Misericordia" (Archbrotherhood of Mercy), built in the thirties. Going forward, we can see, on the right, the Church of S.Francesco, built in the XIIIth century. Behind S.Francesco, at the end of a vast tree-covered field, stands the Church of S.Verdiana restored at the beginning of the XVIIIth century. Coming back to Piazza Cavour, on the right, and taking Via Garibaldi and the steep Costa (Via Ferrucci), the only remaining gate of the ancient town wall can be seen. On the right, along Via Lungo le Mura you can see the ruins of medieval buildings. Once Piazza del Popolo is reached, the Palazzo del Comune (Town Hall), rebuilt after a fire in 1544 and restored in 1867, can be seen on the left. Opposite stands the church of SS. Lorenzo and Leonardo, built between the XIIIth and XVIth century. Following Via S. Ippolito on the left of the church and climbing the steps opposite, we get to the top of the hill (panorama) where the Parish Church of SS. Ippolito and Biagio stands. it was built in 1195 in brick with ceramic decoration on the facade. On the back a long stretch of the early town wall and the remains of two towers can still be seen. Coming back to Piazza del Popolo, round the corner of the Town Hall we get to the medieval Via Tilli. At number 41 we find the Town Art Collection that contains the frescoes and sinopias of Benozzo Gozzoli executed between 1484 and 1490.

THE SURROUNDINGS OF CASTELFIORENTINO
The countryside around Castelfiorentino, a suggestive mild hilly landscape, is also rich in interesting historical and artistic monuments.

1st ROUTE
From Piazza Cavour, crossing the bridge over the Elsa river, turn right and take Via Sanminiatese. Passing through Dogana, a small village once municipal border, we come to a site called Madonna della Tosse, where we can see the Chapel frescoed by Benozzo Gozzoli and his co-workers in 1484. Now the frescoes can be found in the Town Art Centre. Taking the road on the left we come to Castelnuovo d'Elsa, dominating the valley, where remains of the early town wall and medieval construtions can be seen. Nearby, about 3 Km away to the south-west, you find the Parish Church of Coiano, a typical example of Tuscan Romanesque. On the way back to Castelfiorentino, passing through Castelnuovo d'Elsa, follow the sign to the Villa of Meleto. After visiting the villa, cross again the Elsa river and take the 429 State Road, along which the Villa of Granaiolo can be seen. It was built at the beginning of the XVth century on the ruins of an ancient fortification. Heading back to Castelfiorentino, we pass through Cambiano, where you can admire a XVth century beautiful Villa and the Church of S. Prospero, of which documentation exists as far back as 863.

2nd ROUTE
At the crossing between Viale Potente and Viale Zanini, follow the signs to Renai. Running along a winding road, after a steep slope, we arrive to the Pieve Vecchia, the earliest settlement of Castelfiorentino, from which we can have a delightful view of the town. Heading forward, we find the farm and the Villa of Cabbiavoli. Nearby you can see also the Villa of Montorsoli, surrounded by a beautiful park. Further on you come to the Piangrande where you can find the Castle of Oliveto, of notable historical and artistic interest. Two km far from there take the 429 State Road back to Castelfiorentino.

THE FRANCIGENA TRAIL
The Francigena trail is a medieval route that linked Canterbury to Rome, millions of pilgrims in the past travelled to Rome walking on this route. It has had a fundamental role in the construction of the European identity, relating the local religions, cultures, habits, languages and economies of several countries of the old continent. At the beginning of the second millennium in Europe there were a multitude of pilgrims looking for the purification of the spirit.
This route attests the importance of the pilgrimage in Middle Ages period: the pilgrims had to make this travel walking (for penitential reason) with a distance of 20-25 km for day. Moreover they did not travel isolated but in group and carried with them the standards of the pilgrimage.
The Francigena was also a way of intense commercial exchanges and at the same the armies passed on this route for their movements.
Our territory was crossed by the Francigena Trail, it helped the birth and development of many localities in the Valdelsa. In fact, during seven centuries, kings, emperors, religiouses and common people walking southwards on the Via Francigena stopped in Valdelsa.
Their path ran along the current town of Gambassi Terme, Castelfiorentino, Certaldo, Poggibonsi and San Gimignano; from here pilgrims continued to Siena and to Rome.
However, Via Francigena is not a "road" as actually we know: it's a "bundle of paths" running along the same direction and crossing near bridges, poorhouses and villages.
Pilgrims arriving in Valdelsa stopped at Pieve di Chianni's poorhouse (Gambassi Terme), at Pancole and at Pieve di Cellole.
Then they walked along the river Elsa as far as Poggibonsi and went up San Gimignano, crossing the centre of town and continuing their journey to Abbadia a Isola and Monteriggioni, as far as Siena.
Since 1994 the European Council has recognized the ancient Via Francigena as "Cultural European Itinerary" belonging to "Historical European Itinerary".
On 2000, jubilee's year, modern pilgrims come back to ancient route.