Castelfranco di Sopra is located between Florence and Arezzo attracted attention of scientists such as Leonardo da Vinci.

Crags and mountain peaks of Valdarno, between Florence and Arezzo, attracted attention of scientists such as Leonardo da Vinci, who used them as the backgrounds for many of his paintings and drawings. Particularly fascinating are crags of Acqua zolfina, not far away from the panoramic road of Sette Ponti, from which, at the junction with the provincial road of Botriolo, the medieval tower of Castelfranco framed by mountain peaks, can be seen. As well as other “new lands”, Castelfranco di Sopra has an urban plant that recalls the roman castrum, with its orthogonal streets and central square where almost all important buildings are assembled: the Palace of the Supreme Magistrate and the Church of S Peter (no longer present). The lots have multiple measure expressed in “Braccio fiorentino” unit (58cm), and as you slowly leave the centre, you see the heights of palaces declining and the width of streets decreasing. According to Vasari, it was famous architect Arnolfo di Cambio to project this town. Florentine imprint still can be seen, not only in the town streets but also on its houses, especially in the first part of via Maestra, originating from the founding period of the “new land”, and completely similar to the line of houses in Florence city centre. On the square, the Municipal Palace still has its ground floor and prisons preserved. On its façade, there are symbols of power and in the council hall, the fresco of Madonna del latte (end of the 14th century) is worth seeing. Descending along Via Cavour, you see the Church of San Filippo Neri, that is represents by a façade from 1761, but in reality the first church was built in 1631 and enlarged in 1666. On the central altar, from the 18th century, there is a painting of San Filippo painted by Florentine Matteo Rosselli, but even more interesting is “ Vergine col Bambino “ from Andrea del Sarto’s school located in the lateral chapel. At the end of Via Cavour there is Torre d’Arnolfo, also called Porta Campana, the only tower remaining. It has the Florentine lily and the date of its construction (1300) carved on its façade. Casa Campa in via Piave has the figure of a horse with Florentine lily next to it, carved on its façade in order to indicate that there was a post office where horses were left. On the other side of the street there is Cappella della Compagnia dei Bianchi chapel, built in the 16th century. Via Arnolfo is also very interesting to go through. Here, the only part of the remaining walls, completed by communication trench for the guards, can be seen. Another particular building is the 18th century Palazzo Sassolini palace in Via Veneto, where the rests of the buildings from the 15th and the 16th century can be found. Finally, in Via Roma street, there is Municipal Theatre named Wanda Capodagli, a very important person for the Castelfranco community. The countryside above the road to Sette Ponti is full of farm houses and houses with towers, small fractions and ruins of feudal castles. All around, a landscape of olives and agriculture fields shaped as the scale of terraces. Above Sette Ponti, there is the area of Balze, where our tour started. 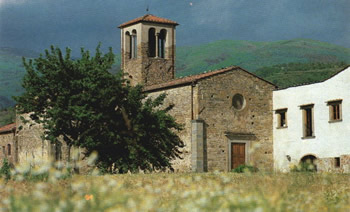 Badia a Soffena
The Badia a Soffena is situated just outside the village and remains surrounded by olive trees and vines. The visitor that travels to Castelfranco on the ‘setteponti’, the road from Arezzo, is welcome by the Badia di San Salvatore a Soffena di San Salvatore a Soffena group of buildings (monastery). The Group is made up of the church, the cloisters the monastery and its walled garden. The Badia is recorded in a document dated 1014. In 1090 in a decree, Pope Urban II° handed the Badia and other possessions to the monks of Vallombrosa. In 1394 the church was completely rebuilt this is demonstrated by the gothic architectural features visible now. In the first part of the 17th century the Badia went into rapid decline and finally ended up being used as an agricultural building. Consequently its frescos and architectural details were sadly damaged. In 1960 the state purchased the Badia and commenced with the reconstruction and restoration. The chips and many hammer like blows, which ruined the frescos have been repaired, the roofs were rebuilt, the cloisters and belltower are now restored to their original splendour . The internal frescos of the church are still being gradually restored to their former splendour. The church layout is in the form of a Latin cross with a rectangular apse and the roof is supported by beams and timber bracing. The internal frescoes date from the 400, painted by well known local artists amongst whom are Poalo Schiavo, the master Liberato da Rieti and Bicci di Lorenzo. The " Annunciation" is of particular quality and is attributed to the brother of Masaccio, Giovanni di Ser Giovanni , called the ‘Scheggia’. Restoration is still ongoing and plans include the re establishing of the archive, the library and setting up of a museum to exhibit the articles found in the 1991 excavations.