The centre of Castellina in Chianti built up area is the ancient fortress designed in the second half of the fifteenth century by the great architect Giuliano da Sangallo. 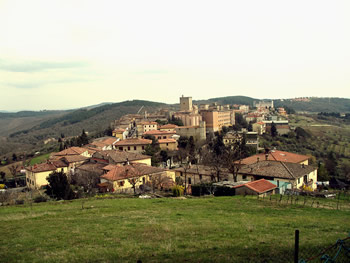 Castellina stands more than protected on its hilly bed. The village offers a series of patrician palazzos which are restored military garrisons built first by the associates of the counts Guidi who, originally from Garfagnana , pressed forward into the heart of Tuscany in the attempt to control it either diplomatically or militarily, and later by the Florentines who were constantly on their guard against the Sienese. The centre of the built up area is the ancient fortress designed in the second half of the fifteenth century by the great architect Giuliano da Sangallo.
In Via Ferruccio one gets the feeling of Castellina’s former opulence. Right at the end of this street, at the fork leading to the fortress, is the neo-Romanesque church of San Salvatore, rebuilt after being destroyed in the second world war.
A stop-off in Castellina may obviously include tasting at the numerous wine lodges, but you can also get to know the great art of Chianti pork-butchers whose charcuterie is highly prized for its unforgettable flavours.

If we want to find the origin of Castellina in Chianti we have to go far back to the beginning of history. These hills, sometimes wild, often softly rolling, still indicate that mankind has been using them for differenl purposes at least since the 7th century B.C. Towns and settlements founded during this period and located along the most important donkey tracks leading from the mountains down to Castellina in Chianti, are stil] proof of a communication link between the large Mediteranian Etruscan cities like Vulci, Vetulonia and Roselle, as well as the famous tradin' centers of the North like Spina.
Since the 1 3th century A.D. Castellina is part of the "Lega del Chianti", meaning "Chianti Alliance". This was a administrative and military alliance within the state of Florence. Because of its optimal strategic location which guaranteed the control of all surrounding roads, as well as the whole valley of the Elsa river, Castellina retained its military position.
Proof of this is the existence of the imposing fortress, nowadays used by the local town govemment. Castellina was once surrounded by mighty walls and smaller towers, only two gates intermpted the closed defence line. One pointed towards Siena, the other towards Florence. Unfortunately both gates were completely destroyed (the gate towards Florence was destroyed during battles in the second World War). Parts of the defending walls can shall be seen today. Unfortunately most parts have been covered over or been integrated into the later construction of houses.
In 1483 Castellina was once again retumed to the Medici. Due to the surrender of Siena to the troops of Karl Vin April 1555 and the following ammexation of the State of Siena, Castellina in Chianti lost its strategic importance and became a part of the dominion of the Grand Duchy of Toscany.

Castellina in Chianti: discover the surroundings