The town of Castelnuovo Val di Cecina rises on the reliefs of the Metalliferous Hills in the Province of Pisa. It is set at 576 m. 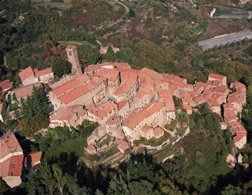 The town of Castelnuovo Val di Cecina rises on the reliefs of the Metalliferous Hills in the Province of Pisa. It is set at 576 m. of altitude and it has a population of about 2,000 inhabitants. The castle and the church of the Ss. Jacob and Philip are its main architectural goods.
The municipal territory, moreover, is scattered with many extremely interesting archaeological sites that refer to the Neolithic, Etruscan, Barbarian and Medieval times. The latter period is mainly testified by the numerous parishes raised after the rooting and spread of Christianity in Central Italy, which took place with the decline and disappearance of the Roman Empire. In effect, several evengelists called the "Saints from Africa" went up the course of the river Cornia to spread Christianity in the area of Volterra and of the Metalliferous Hills. Among them, there are San Regolo, San Cerbone, San Ottaviano, San Giusto and San Clemente. 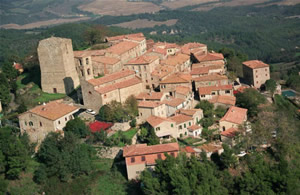 In the Middle Ages, the village was called "Castri Novi de Montanea" (namely, Castelnuovo di Montagna), so called to underline the its position overlooking the hills towards the Tyrrhenian. Not much is known about its origins, but it is almost certain that the first noteworthy built-up area developed at the time of the Lombards (VII century a.D.). It can be inferred that they built the first towers, the sighting turrets and the fortifications along the track connecting Volterra to Massa Marittima. The interest of the Lombards in the area of Castelnuovo was mainly due to its abundance of mineral resources.
From the year 1000 to the beginning of the XIII century, Castelnuovo was a feud belonging to the Counts Alberti who were among the major members of Tuscany's rural aristocracy. In 1213, the city-state of Volterra helped the "freiherren", the people's class of Lombard origins, to make the town autonomous. Yet, its many mineral resources (silver, sulphur, alum and vitriol) did not allow the town to avoid the clashes between the two powers for its control, which continued for two more centuries. 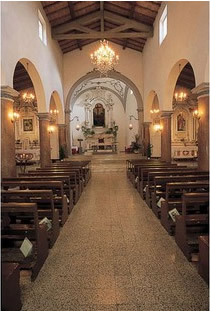 In 1429, at the end of the fight between the Alberti and Volterra, Florence became the new leader of the area before it conquered the whole territory of Pisa.

Castelnuovo, which the armies hostile to the Medici had severely damaged, recovered its strength thanks to the Medici themselves, who often chose its baths for their holidays and they gave the town the renown of a holiday resort the rich families of the Tuscan Grand Duchy crowded.
Yet, the Lorraine must be attributed the actual rebirth of the territory, in particular thanks to the reforms of 1776 issued by Pietro Leopoldo I who transformed the then feud of Castelnuovo into a municipality.
Since the XIX century, Castelnuovo knew the industrial development thanks to the exploitation of its steam vents. Their vapour can be used for the extraction of several chemical compounds.