Castiglione della Pescaia is a well known bathing centre on the coast near Grosseto in Maremma. 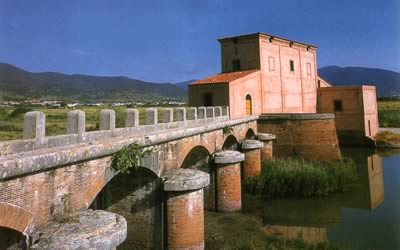 Castiglione della Pescaia is a well known bathing centre on the coast near Grosseto. Of Roman origin, it might correspond to ancient Salebru, the centre cited by Roman itinerary sources. The medieval village developed around the castle on top of the hill, while the modern part developed along the coast. In the tenth century it underwent Pisa's domination, and it was in that period that the first big scarp-based tower was built on the hill top.


Later on the village was encircled by walls, fortified by turrets and towers. In 1447 Alfonso d'Aragona, the king of Naples, ordered to raise the two towers and, when two storeys were added to be used as residences, the building finally looked like a real castle. After the d'Aragona, Castiglione was dominated by the Piccolomini from Siena, who remained there for about a century, then by the Medici for 178 years and by the Lorena for 120 years, until Italy became a kingdom and the castle, by then a State property, was completely neglected. Towards the end of the nineteenth century an architect from Grosseto, Lorenzo Porciatti, bought it from the State, restored it and went to live there in summer or during hunting season. Now it belongs to private people. Castiglione della Pescaia is situated on the hills overlooking the mouth of the river Bruna, north west of Grosseto .
The most ancient discoveries about the settlement dating back to the Roman Republic consist of a series of buildings in an area called the Paduline. Photos taken from airplanes reveal vast built-up areas, perhaps ancient Salebru, a centre about which there's no documentary evidence in the Middle Ages.

In the tenth century Ottone 1st from Saxonia granted Pisa the control of the coast, from Porto Ercole to the mouth of the Arno. That's why Castiglione underwent Pisa's domination. To that period dates back the first big scarp-based tower. The village, however, was actually dominated by the Lambardi from the nearby centre of Buriano, in conflict with the Sant'Antimo Abbots who claimed its possession. It was only in the thirteenth century that Castiglione became a free commune. Two centuries later, following the demographic and commercial decline, the inhabitants abandoned the lower part of the village and settled round the castle, which was fortified. In 1446 the village was occupied by the d'Aragona and was given by Eleonora di Toledo to Cosimo I dei Medici as her dowry.

Near Castiglione della Pescaia there are two places that testify the reclamation made by the Lorena: the Casa Rossa and the ponte Giorgini. Giorgini was a mathematician who was commissioned (1827) by Leopoldo II di Lorena to solve the century-old problem of the marshy areas. According to the scientist, malarial fever was caused by the mixing of fresh and salt waters. He had the marshy areas divided into five basins corresponding to the major valleys, to favour their natural drainage. In 1827 was built, over the river Bruna, the three-span bridge with sluice-gates opening towards the sea. Few years later was begun the excavation of a diversion channel connecting the Ombrone to the mouth of the Bruna, through a place called Bucacce, then a second diversion channel was excavated, the course of which closely followed the ancient navigable channel. Pre-industrial societies considered beaches as areas of secondary importance, as they could be neither farmed nor used for pasture. There people could only pick up the brushwood brought by the sea to use it as firewood or just catch some fish, and it was onto beaches that fishermen used to drag their small boats. We can say that the usage of beaches began to change in the nineteenth century, when people began to go on holiday, but the real changement took place in the twenty years between the first and the second world war. When not only few people but big masses began to have more free time and learned to enjoy bathing and sunbathing, beaches became places where people loved spending most of their free time. When the request for beaches suddenly got stronger, they began to be equipped: there one could find not only places where to eat and drink, music and sports facilities, dancing and skating courses, hotels and parking areas, but also all those elements that are said of primary urbanization. This is a process that began in the 30's and has continued until our days since the end of the war. Also the beaches of Castiglione della Pescaia have undergone this process and now summer tourism is one of the major resources of the village. From a naturalistic point of view, Castiglione offers many different situations in a limited area: the sea, which is the predominant natural element, is subject to violent storms, with winds blowing mainly from north-east and west in summer and from south-east and south-west in winter. The scythe-shaped beaches, one of which makes up the sea-front of Castiglione and stretches as far as Punta Capezzolo, while the other stretches as far as Le Marze, are examples of balance between the sea currents and the winds, also thanks to the regular moving of the filling material coming out of the mouth of the river Bruna. The pine-wood completes the variegated frame of the coast, while the green of the Mediterranean bush colours the hills behind the village.

The marsh of the Diaccia Botrona is what is left of a wider marshy area; there, in different times, was built an artificial water system to reclaim a great part of the plain between Castiglione and Grosseto. From a geological point of view, it's very interesting to analyse how the Big Stone cropping out along the Panoramic Drive was formed .
Its formation, in fact, goes back to the Oligocene (thirty million years ago) and consists of sandstone layers, which have acquired the same characteristics of turbidites owing to their sedimentary structures.At Castiglione della Pescaia, sunk under water but very near the coast, there are rocky sandstone reefs which run parallel to the coast and contain the remnants of ancient iron-processing. These sandstones (San Vincenzo sandstones) are examples of rocks containing documents of human industry. The abundance of the iron scoriae is due to the enormous excavation of iron ore at Elba island. The ore was brought onto the continent beaches facing the island for a first processing. Nowadays the smelting losses, then left on the beaches, appear alloyed to the sandy sediments by the hardening process (diagenesis) that has changed loose sand into sandstones. The fact that these rocks are usually under sea-level, except at low tide, seems to show that the average sea level has risen by about one metre in the course of the 2,000-2,200 years since most of those materials accumulated. Most of the processing of the iron ore from Elba, in fact, goes back to the period of the Punic wars. This sort of sediment is interesting not only because it contains elements of human industry "in the rock" but also because it makes it possible for us to value and document how much the average sea level has risen in the last two thousand years.