Sets on the summit of a back not too far from the Cassia, Castiglione of Orcia it is a small predominantly agricultural and handicraft center. 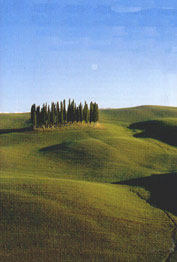 Sets on the summit of a back not too far from the Cassia, Castiglione of Orcia it is a small predominantly agricultural and handicraft center. Ancient center quoted since the first decades of the VIII century Castiglione of Orcia was inzialmente ownership of the Aldobrandeschis, contended from the abbey of St. Savior: become then free Commune it lost its own autonomy because of the conquest senese. The actual Castiglione, harvest to the feet of the mighty Fortress of the Aldobrandeschis, offers still its medieval aspect to the visitor with picturesque and characteristic angles: the principal plaza devoted the Oldie to the painter Lorenzo of said Pietro (here been born in 1492) on which the Town Building is leaned out it is entirely covered by a flooring realized with pebbles of river geometrically divided by riquadrature in bricks.

In the center of the plaza a seventeenth-century fountain is set in travertino. The Church of the Saints Stephen and Worthy it is the religious building of great interest, his 500 frescos, work of Simone Martini and the Lorenzetti, is preserved to Siena near the Superintendence. Worthy of visit is the thirteenth-century church of Saint Maria Maddalena. From the park of the Fortress Aldobrandesca is dominated the whole country and good person it departs of the surrounding valley. 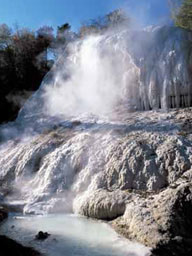 To the town territory the Fortress belongs to they Shake, rampart of the possessions of the abbey of St. Savior. To decay some power abbaziale the castle it became ownership of the family Tignosi, vassals of the Aldobrandeschis, and it was finally conquered by the Senesis. The Fortress, in which Caterina sojourned from Siena, restored, it can be visited.
To brief distance it is situated Fortress of Orcia, ancient suburb enriched by the presence of some beautiful churches and a characteristic plaza where an existing cistern is admired since the XIII century. Notable from the naturalistic point of view the great calcareous incrostazionis of the White Ditch near Baths of St. Phillip, well known place besides for the thermal waters alkaline sulfuree that gushes out from suggestive rocks of travertino to a temperature that varies you draw 25 and the 52 °Cs: here the Served Monks have turned into the chapel a cave where it seems St. Phillip Benizi has sojourned, that to Baths St. Phillip operated numerous recoveries. We remember besides suggestive lived centers what Ripa, Campiglia and I Live of Orcia, that preserves beautiful Churches and splendid Buildings among which it detaches the ancient Hermitage Camaldolese of County, risen before Thousand, but still visible in the stately sixteenth-century forms wanted by the Cervinis of Montepulciano, that entrusted the realization of it to a skilled architect (probably to Anthony from Sangallo the Young one). 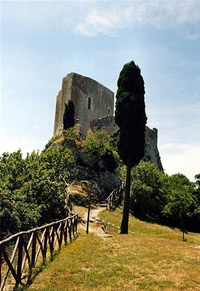 To the feet of the hermitage the wood of firs autoctono rises, the abetina of the I Live; who reaches afoot the hermitage it can cross besides a suggestive, small valley where the attractive bridge rises "of the Persons in love."
To little distance from the hermitage the Romanesque church of the Ermicciolo is found, surrounded from a grove of chestnut trees. Awry of Campiglia the diruto said building of the Viscounts Campigliola would deserve a suitable restauration, if nothing else for his position, once strategic and today panning.
For last we remember the zone that has as reference the inhabited area of Hen, where the actual Cassia coincides in wide part with the ancient street Francigena.
Numerous they are the ancient stations of mail or the strengthened farms: among these we remember to her Poderina, it Climbs her, it Retorts her, Her Briccole, where the ancient Church exists of still St. Wandering and in whose Hospice-Spedale it stopped among the other Francis of Assisi to the reentry of one of his last trips in the valley reatina.