The inhabited nucleus of Castiglion Fiorentino was developed in the Etruscan period and the Hellenistic period. After the Romans conquered the Arezzo territory they organized agricultural production in the form of villas. 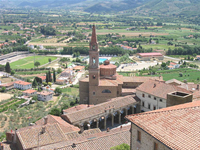 History
The inhabited nucleus was developed in the Etruscan period (6th - 5th c. BC) and the Hellenistic period (4th c. BC). After the Romans conquered the Arezzo territory they organized agricultural production in the form of villas. During the reign of the Emperor Augustus, the Valdichiana began a period of decline; the population, due to the flooding of the valley, moved to the hillside areas that were safer and more salutary. The construction of the parishes began at this point, connected along a footpath in the hillside and the roadway of the Val di Chio. Documents date the town with the name of Castiglione in the 10th century when it became the feudal property of the Marquis of Monte S. Maria.
In the following centuries, while it remained under the protection of the emperor, the township belonged to the diocese of Arezzo. Following the defeat of Arezzo in Campaldino (1289), the township passed to the domain of Florence. In 1303 it was again conquered by Arezzo and Siena, lead by the mayor Uguccione della Faggiola. Bishop Guido Tarlati, who became monsignor of Arezzo and its territory expanded the city walls and modified the urban structure. With the death of Tarlati, Castiglione Aretino returned briefly to the Florentine domain (1336 -1344). In 1344, it was conquered by Perugia and renamed Castiglione Perugino. In 1369, the population rebelled against Perugia, putting themselves under the protection of the church state. In 1384 the town passed finally to Florence and was renamed Castiglion Fiorentino. The beginning of the 15th century brought a period of crisis due to the epidemic of the plague and the subsequent famine. During the war between Florence and the Republic of Siena, Castiglione fell into the hands of Piero Strozzi, returning briefly under the rule of Florence (1554).
The Medici government was followed by the Lorena (1765) who, reclaiming the Valdichiana, created the proper conditions for strong demographic development, social changes,, and a large economic boost. The Florentine domain ended in 1799 when the Tree of Liberty was raised in the Piazza del Mercato. From 1800 to 1814 the township was garrisoned by Napoleons troops. With the f all of the French government, the Lorena returned in 1814 and began reclaiming the Valdichiana. Castiglion Fiorentino then followed the fate of Tuscany and the Italian Republic. The passing of the war front during World War II caused notable damage to both the historic center and a large part of the surrounding territory. 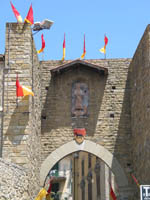 The Walls
The first Medieval city wall went up in the 13th century. It was enlarged in the 14th century and the "Muro dell'Ala" ("Wail of the Wing") was built to connect the Cassero to the outside walls. Around the middle of the 1300's, the Perugians, rulers of the township, brought about further reconstruction. During the 1600's, the towers were partially torn down. The principal access to the historical center is by the Florentine Gate which was part of the wall circuit of the 1200's. It was last remodelled in 1813. On the outside there is an anti-gate to the left of which is a Medici coat of arms; the inside of the gate is made up of three arches above which is a statue of S. Michele, patron saint of the town. To the left, the walls wind towards S. Francesco. The outer part, called Pisan walls for the participation of the Republic of Pisa in their construction, leads to Piazzale Garibaldi. Remains of other two towers can be seen along this wall. Towards the present Gate of S. Giuliano, the walls descend to enclose the ecclesiastical complex of the Collegiata and then continue towards the Roman Gate, that is the 13th century Gate of S. Angelo. Above this last gate is a niche with a terra cotta statue of S. Michele. Ahead, we find the Town Theater built into the city walls.
The area of the Cassero

Piazzale del Cassero
The archeological digs conducted here unearthed evidence of an Etruscan city wall (ca. 4th e. BC) made up of large stones and the remains of a city gate. Next to the Palazzo Pretorio (Courthouse), the digs, which are still in progress uncovered evidence of a sacred ground used from the end of the 5th e. BC until the 2nd C. AD.
During the 11th century the first center of Castiglione was formed here. During of the rule of the Tarlati in the first decades of the 14th century, the area was turned into a small fortress, developed along with the construction of the Casseretto in 1367 and the well in 1368. The Perugians reconnected the Casseretto with the external wall circuit by means of the so-called "Muro dell'Ala' ("Wall of the Wing"). 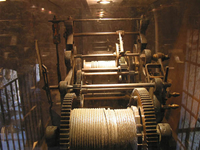 Following this, the area became the property of the Republic of Florence that then sold it to the Castiglionese in 142 l. In the 16th century, the nuns of S.Girolamo used a part of this area to build their convent. In the 19th century some of these structures were transformed into prisons and in 1845 the gate and drawbridge were destroyed.
Palazzo Pretorio (Courthouse)
The palace was built in the 15th century. Objects found during the excavations in the Piazzale are on display in the ground floor rooms. Among these are noted a sima decorated with lilies and rosebuds and a painted terra cotta lion's head. Etruscan and Roman finds discovered around Castiglion Fiorentino are also on display. The public library is also located inside the Court House building.
Pinacoteca (Municipal Art Gallery)
The Municipal Art Gallery, in addition to being a museum space, also includes the Church of S. Angelo.
There is evidence of a chapel dedicated to S. Angelo dating back to the 12th century. The church was built in the R,omanesque style between 1229 and 1239. In 1532, the nuns of S. Girolamo were granted its use.
During this period two important modifications were made : the original orientation of the church was reversed closing off the original portal and moving the entrance to the southern side of the building; the "Coro delle Monache" ("Nuns Choir") was built in place of the apse.
Following the Leopold abolition of the convent (1785), the church underwent many disparate uses: hospital, wine cellar, workshop. The building was recently restored and included as part of the Municipal Art Gallery Works of art on display include a cross of the Umbrian School (13th century), two panels by Jacopo di Sellaio (15th century) and The Virgin with Child and Saints (1549) by Giorgio Vasari. The church leads to the guard room and from here to the hall of S. Orsola that holds valuable works of gold including the Reliquary of S. Orsola from the 14th century. From this hall, a staircase, leads down to the crypt of S. Angelo. The entrance to the Pinacoteca is on the first floor, where several important works are on display in the large hall: Crucifixion (early 13'h e.) from the workshop of Margarito d'Arezzo, a Madonna with Child (ca. 1328) by Taddeo Gaddi, panels by the Siena school, The Stigmata of S. Francesco (1486) and S. Michele (ca. 1480) by Bartolomeo della Gatta, Madonna with Child and S. Giovannino (middle 16th e.) from the workshop of Ridolfo del Ghirlandaio, Madonna with Child and S. Anna (first half of the 16th c.) by Papacello, and the Ecstasy of S. Teresa (1723) by Gian Domenico Ferretti. Some reliquaries and other religious objects are kept in the glass case in the middle of the room. On the top floor is the Tower Room where coats of arms and plaques found in the area of the Cassero are on display. 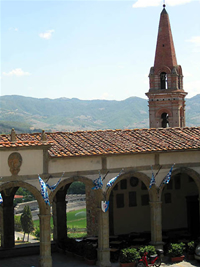 Vasarian Loggia
The nine arch construction dates back to 1513, during the time of the rebuilding of the main piazza. The traditional attribution to Vasari was verified by the restoration carried out between 1560 and 1570, the period in which the Medici coat of arms was placed there. For structural purposes, three of the arches along the Val di Chio were closed off in 1773, later to be reopened in 1922.
Church of S. Francesco
The construction of this church was begun in 1256 by franciscan monks. The original sandstone facade still stands today. Above the portal is a terra cotta relief of S. Francesco by the Castiglionese artist Antonio Brogi (1946). The stained glass windows were realized in 1419. The simplicity of the interior architectural layout is typical of the Mendicant Orders. Noted works of art include: Virgin in Glory; a fresco on the inside facade wall; the Vocation of S. Matteo (around 1663) by Salvi Castellucci on the first altar to the right; a piece of a fresco of the Virgin with Child; the fourth altar on the right, sculpted by Filippo Berrettini of Cortona with a statue of Christ (1651) by Sallustio Lombardi in the center; Announcement of the Angel to S. Anna in the chapel to the right of the main altar by Salvi Castellucci; in the same chapel a statue of Christ at the Column (1617) by Niccolò di Smeraldo Salvi da Lucignano; a wooden crucifix above the main altar by Giambologna; a Cantoria sculpted in stone above the door of the sacristy (1546); a crucifix by Francesco Morandini (Poppi), on the second altar to the left. There is a fresco of The Virgin on the Throne with Baby Jesus and the Saints, work of a 15th century Arezzo painter in the small room that leads from the sacristy to the cloister. 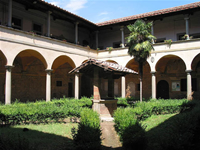 Cloister of S. Francesco
This church was built during the 1600's in the tuscan style. The ground floor is made of semi-circular arches and transept vaults while the loggia of the top floor is made of columns that support the eaves. The severely damaged frescoes in the tympana are by Pelliccione da Colle and represent scenes of the Life of S. Francesco (1627).
Church of S. Angelo
A small necropolis was discovered from the 4th and 3rd e. BC below the floor of the church in the part near the main altar. Part of an Etruscan wall was discovered between the central pillar and the present entrance. This confirms the hypothesis that the church was built on top of an Etruscan temple. The Romanesque crypt of the church is entered from the Municipal Art Gallery, which contains various finds, fragments of a chalice of "bucchero" (black, Etruscan terra cotta), ceramic fragments and pieces of the Etruscan city wall from the Hellenistic period that were discovered during the digs in 1989.