Cerreto Guidi, a hilly territory, situated between the Montalbano and Arno, owes its name to the Counts Guidi, an ancient feudal family who built a castle not far from the route Francigena. 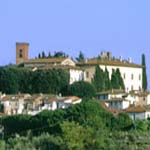 Cerreto Guidi, a hilly territory, situated between the Montalbano and Arno, owes its name to the Counts Guidi, an ancient feudal family who built a castle not far from the route Francigena, known as the road of pilgrims and merchants. In a famous drawing by Leonardo Da Vinci (1503) the castle of Cerreto Guidi is represented; this drawing in a synthetic but truthful way gives an accurate picture of the urban plant of the village, which appears surrounded by the XIV century walls, characterized by a circular style and the presence of 8 tower. In these hills, rich in the cultivation of grapes and olives, the taste of hospitality makes your stay always delightful: here, we produce grape vine of DOGG and Cerreto Guidi, with every right, makes part of the association “Città del vino”. The vineyards cover these hills dotted with farms, villas and extensive farmhouses. In the countryside and close to the small urban centres, we find churches and oratories which demonstrate the ancient veneration to the holy protectors, first among all St. Liberata, celebrated patron of Cerreto Guidi. The lovers of nature and those keen on bird watching have the chance to go on interesting excursions in the Padule di Fucecchio, a vast moist area housed by conspicuous colonies of herons, and other aquatic species which have found their ideal habitat here. 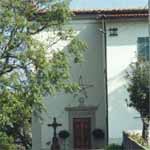 The ancient church of St. Maria Assunta, seat of the present parish of Bassa, results to be existent since the year 998 with the name of St. Maria de' Conflenti or Gonfienti, denomination probably due to its site in front of the confluence of the Elsa river in Arno. This church is also mentioned in the Bulls sent by Innocenzo III (1198) and Onorio III (1217) to the Abbots Vallombrosani of Fucecchio to whom it was granted in patronage until the year 1257, when all the rights and appurtenances were transferred to the Nuns Clarisse di Gattaiola in Lucca; the Mother Superior exercised Episcopal jurisdiction until 1622, year of the foundation of the new Diocese of San Miniato.

The parish church of Gavena, represented in the “Mappe dei Capitani di Parte Guelfa” exactly in the plain along the present Via Provinciale Lucchese, is registered with the name St. Bartolomeo in the catalogue of the churches of the Lucca Dioceses dated 1260, because of its position on the border of a political and ecclesiastical jurisdiction. 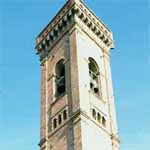 In 1631 the plague spread, in a serious way, in Cerreto and in the near lands, like everywhere. A hundred victims were buried in a site, which was at that moment, isolated and not very populated, in order to avoid the risks and also, gather the great number of victims, giving them the chance to bear the solace of a prayer and a visit. Lazzerettto rose as a burial place of the plague-victims, before becoming a built-up area; today, it is an active and populated centre with relevant economic interests.

Documented since the high Medieval times (X century) in one of the most important painful points as the Arno Pass of the Strada Romea, the church of Ripoli together with the Castle of Colle della Pietra (almost surely situated on the top of Poggio al Vento) was a site of territorial and road control. In 992 the church, dedicated to St. Giovanni Battista and St. Pietro, was destroyed for unknown causes.

The word Stabbia derives from the Latin "stabulum", and it means "place right for pasture" because of its nearness to the humid lands of the Padule di Fucecchio. Few documents mention Stabbia in the remote past, except for a paper dating back to April 1244 belonging to the Emperor Federico II. The Constitution of Stabbia settlement is rather recent; but the importance of this place didn't pass unnoticed to the Medicis who sensed, in this fertile strip of land, the possibility of profitable harvests, imposing hunting and prosperous fishing. The consolidation of these interests is revealed in the construction of a Palace, built on a pre-existing “casotta con torre” (“house with tower”) which became property of the Solderinis after 1548. Cosimo I established in Stabbia an estate consisting of 6 farms with houses for farm workers, 2 furnaces, a house at the Stabbia Porto used for the harvest of fishes but also for other purposes. The church of Stabbia and the constitution of an independent parish from that of Cerreto dates back to 1781 and to the following years.