Certaldo is divided between its medieval walled town on a hill and the modern residential and industrial suburb spread out below. 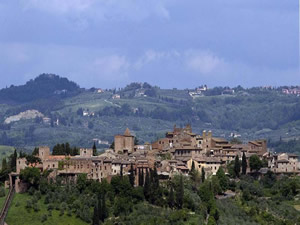 Certaldo is divided between its medieval walled town on a hill and the modern residential and industrial suburb spread out below.
Etruscan and Roman in origin. Certaldo was also situated on the Via Francigena.
In the lower town is the main square Piazza Boccaccio (car park), with a marble statue by Augusto Passaglia (1879) which was commissioned to mark the fifth centenary of the death of Giovanni Boccaccio.

Certaldo Alto
The charming medieval upper town, reached on foot in 10 min or by cablecar from the station in the main piazza (2min). built almost entirely of brick, is well preserved despite some damage during the Second World War. All the principal buildings, as well as some attractive houses, face onto Via Boccaccio.
Half-way up on the left is the Casa del Boccaccio (rebuilt in 1947). with a tower and loggia, which was bought and restored in the early 19C by Marchesa Carlotta dei Medici Lenzoni.
Facing onto the little piazza is the church of Santi Michele e Jacopo. The simple brick facade dates from the 1 3C and the interior has been restored to original Romanesque appearance. In a niche is an urn containing the body of Beata Giulia. 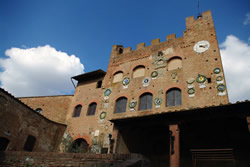 Palazzo Pretorio
Was originally the castle of the Conti Alberti with its facade is decorated with coats of arms in stone and glazed terracotta that commemorate the governors (vicari) sent from Florence. The keep remains from the original 12 C structure, and the rest dates from the 1400s. Around the courtyard are the rooms where justice was administered, dungeons, and a chapel with a fresco of Doubting Thomas attributed to Benozzo Gozzoli. Several rooms have decorated doorways, fireplaces and remnants of frescoes.

Certaldo Museum of Sacred Art
The Certaldo Museum of Sacred Art displays works of religious art from the churches of the Certaldo Vicariate. The Museum’s rich and varied collection includes diverse types of objects: paintings, sculptures, silver works, fabrics and vestments. The tour begins from the Large Hall, the windows of which look out onto the town’s walls. Here the oldest paintings from the 13 C to the 16 C are displayed (13 C Madonnas, a Triptych by Ugolino di Nerio, Puccio di Simone’s Polyptych, works by Cenni di Francesco).
Next are three small halls dedicated to silverworks, many of which come from San Lazzaro a Lucardo and were commissioned by the Gianfigliazzi family. The last hall in this section houses the Reliquary-bust of the Blessed Julia made by Paolo Laurentini in 1652-1653. From here we enter the Hall of Paraments (chasubles, humeral veil, chalice veils and a four-piece set of vestments) and then the elegant seat of the Company, where there are 17 C paintings and sculptures, Saint Nicholas of Tolentino and Saint John of San Facondo by a 17 C Sienese sculptor. The tour ends in the Hall of the Crucifix, a wooden work from the 13 C and the Museum’s masterpiece.