The first mention of Cetona is found as a "Castle" between 1207 and 1241 in the estate of Count Ildebrandino, but subject to the sovreignty of the Commune of Orvieto. 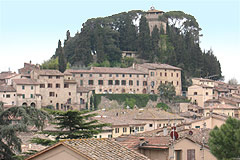 The first mention of Cetona is found as a "Castle" between 1207 and 1241 in the estate of Count Ildebrandino, but subject to the sovreignty of the Commune of Orvieto. Around the Castle, known locally as the "Rocca", a village developed, a typical medieval agglomeration of houses and dwellings built in a spiral on the steep slopes of the hills. In the area around Cetona one of the oldest human settlements of central Italy has been discovered which goes back 40.000 years and the remains of which can be seen in the delightful archeological park of Belverde and the 25 prehistoric caves which are today lit by power comming from modern and ecologically friendly solar panels. The finds are conserved in the museum devoted to the prehistoric period of Mount Cetona located on the ground floor of the Town Hall, a museum which the experts have defined as "didactically perfect".
This ancient community is at the same time a lively centre of contemporary life and has become, since the 1960s, a haunt of "VIPs" who have bought and renovated farm properties. The history of Cetona precedes the conflict between Siena and Orvieto, in the middle of the 13th century enjoying the assistance of Florence, and for a short time, in the 14th century, dominion by Perugia until cessession to the Republic of Siena in 1418.
The Sienese nobility remained until the end of the Republic (mid-16th century) when the Grand Duke Cosimo I of the Medici conceded Cetona to the Marquis Chiappino Vitelli who trasformed the fortess into a residence and built the large town square (Piazza Garibaldi) where Palazzo Vitelli can still be seen. In 1772 Cetona became a Commune linked to Sarteano until 1840.
Today Cetona has 3,000 inhabitants and covers 53 sq km including Mount Cetona, known in former times as "Monte Piesi" (1,148 m.), and the hills which slope down towards the flat bottom of the Astrone valley. Other than the main town itself, starding 385 metres above sea level, the Commune includes the villages of Piazze, a recent development, and the areas of Belverde and Camporsevoli. Even if residential tourism of élite classes has brought fame to the village of Cetona, the community has retained its rural identify on which its economy is predominantly based. 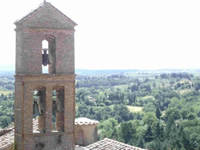 The town is of Etruscan origin and is built along circular lines following the sides of the hill on which it stands. The square tower of the fortress is dated between 900 and 930 while the round towers date back to 1458.
The following buildings are worth noting:
SS.TRINITA': built between 1417 and 1475 it contains a cycle of frescos by Pinturicchio.
THE CHURCH OF S.MICHELE ARCANGELO: a structure from 1155 with Sienese school frescos attributed to Cola Petruccilli who also worked on the crypt of Orvieto Cathedral.
PALAZZO VITELLI: built in the second half of the 16th century.

Archeology:
Some of the oldest finds which bear witness to the presence of man in the Valdichiana have come to light on Mount Cetona. In the small GOSTO CAVE many hand-made stone artefacts have been discovered dating back to the MUSTERIAN culture (between 40,000 and 80,000 years ago). Similar objects have been found in the LATTAIA CAVE, location of an ancient cult of water worship, which were meant to promote milk production in pregnant women.
An examination of the finds in 1939 estabilished that the Lattaia cave was frequented from the beginning of the mid paleolithic until the first Villanovian period (9th-10th century B.C.) and ultimately in Roman times as can be seen from a votive fireplace from the first century A.D.
Many other caves, forming the most important labyrinth of the whole of Mount Cetona, can be found at Belverde. Between 1928 and 1935 thirteen entrances were explored providing the most abundant documentation relating to the bronze age in central Italy.The search of the CAVE OF S.FRANCESCO produced particularly interesting results: here some fireplaces and vases with the burned remains of cereals and vegetables were discovered.
Similar finds have been discovered in practically the whole area, some traced back to the RINALDONE culture (late bronze age) and the Appennine culture (bronze age).
On higher levels concrete evidence of remains of the Musterian era were found.
Numerous cuts in the rock visible mainly in the Belverde area, particularly near the so-called amphitheatre, are related to mining, probably roman.
In 1990 the Civic Museum for the Prehistory of Mount Cetona was inaugurated which documents the various stages of human settlement on the territory starting from the paleolithic up until the bronze age.