There is the thermal Chianciano, with parks and avenues, hotels and shops, but it also exists the original core of the town, the so called paese. 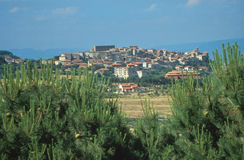 The "Town" and its thermal growth
Chianciano has got two separate identities. There is the thermal Chianciano, with parks and avenues, hotels and shops, but it also exists the original core of the town, the so called "paese" (village).
The antique Chianciano is linked by della Libertà Avenue to the new part, that has been spreading around the thermal parks. It rises up within the walls, one can enter by passing through Rivellini Gate. On the left, just after the small Mercy church (that is today dedicated to the Virgin), there is the massive structure of the Manenti Counts Castle, which is called the Monastery, while the Clock Tower stands out at the end of the road.
From the wall below one can admire a unique and wide panorama, with the peaks of the Cetona and Amiata Mounts overlooking in the distance; in the valley, mingling with one another, the three lakes of Chiusi, Montepulciano and the Trasimeno.
Beyond the Clock Tower, the street opens into the main square of the village, Matteotti Square, with its beautiful fountain. Here you can also find the seat of the Geo-Archaeological Association (for information tel. 0578.30.665), often presenting interesting thematic shows within a room that is usually employed as laboratory for the restoration of archaeological finds. Coming on to Via Solferino, just at the beginning it appears the town hall and on the right small streets follow one another, with arches and little squares where time seems to have stopped and the rhythms of life are still liveable.
By the middle of Via Solferino we find on our right a square that is closed on its sides by the Podestà Palace, with its front still showing the coat of arms of the antique local podestà and by the Archpriest House where there is also the seat of the Collegiate Church Museum (for any information tel. 0578. 30.378). 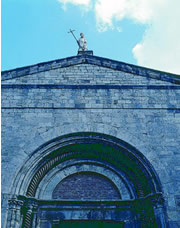 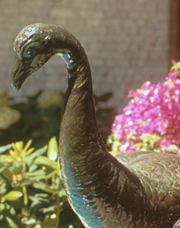 The town of health
Having been known since the Etruscan times for its beneficent thermal waters, Chianciano still has a great charm and appeal with its springs, the Holy, the Fucoli and the Sillene.
Besides the traditional cures, Chianciano Thermal Baths offer new both esthetical and therapeutic treatments for a complete remise-en-form, by employing highly qualified teams of doctors and specialists. Being placed in a territory rich of art and history and surrounded by a unique natural environment, Chianciano proposes an alternative to the traditional holidays, offering new and different ideas as for relax, sport and enjoyment, while making you recover a good form. Chianciano is an important reality of modern thermal tourism, where the traditional offer is combined with the recover of a good physical and psychical form.
Chianciano and its Thermal Baths offer all this, always in new combinations.

Harmony of waters and surroundings
The area where Chianciano thermal baths have been developing is surrounded by woody hills, that haven't been affected by the serious problems of pollution yet. That represents the best safeguard of this territory that is very rich of thermal waters with a highly curative action. A typically, proudly Tuscan landscape spreads all around as far as the eye can see, alternating, with touching chromatic effects, green wavy hills and barren clay surfaces, lonely cypresses and ruffled woods, as protection for fortresses and medieval villages, silent testimonies of the antique civilisations that have been following one another in the centuries.
In perfect harmony with the surrounding landscape, Chianciano Terme keeps in its numerous parks and gardens a considerable quantity of green and offers bothl the climatic and touristic advantages deriving from its fortunate geographic position.