The town of Chianni, where the castle and the churches of Santa Maria del Carmelo and of San Donato can be admired, is in the province of Pisa. 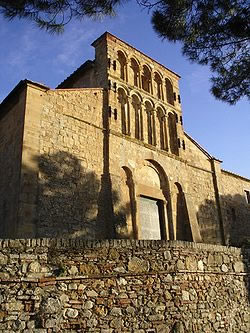 The town of Chianni, where the castle and the churches of Santa Maria del Carmelo and of San Donato can be admired, is in the province of Pisa.
The origin of the first population in Chianni, is Etruscan as the graves found in the town's territory demonstrate. Information on the village is in the archives of Pisa and date to 1086.
Chianni was a castle of Lombard origins and Pisa, Florence and Volterra contended for it for a long time. in 1288 it swore its loyalty to the bishopric of Volterra causing the Pisans's reaction who conquered it under the lead of Guido di Montefeltro. At the half of the XIV century, after a new rebellion against this sea-faring republic, the Emperor Charles V settled the bishop of Volterra was the ruler of the town again. In 1406, Chianni entered the Florentine dominions.
The town throve thanks to its mines of alum, namely a sulphate that is much used in the Tuscan textile industry. This is how the town earned itself the attention of the Medici, who transformed it into a marquisate and gave it as a feud to the Riccardi family of Florence together with other territories. Between the XVII and the XVIII century, the territory was also a destination of pilgrimage in the Sanctuary of the Madonna del Carmine, raised on the foundations of the ancient XV-century church of Santa Maria di Chianni.
At the half of the XVIII century, the sanctuary became a lazaret that housed the victims of a violent cholera epidemic. Because of such event, the structure went through numerous changes. Its modern architectural appearance was re-established around 1930, only. Chianni entered the Town Hall of Rosignano with the Leopoldine reforms of 1776 and experienced the Italian Risorgimento and the two World Wars. After the Second World War, the countryside was depopulated because of the nearby industrial centres.

Chianni, which is famous for its sulphureous waters, still keeps most of its medieval structure and it is surrounded by Turkey oaks woods, oak groves and chestnut woods. The latter produce the "Marrone di Rivalto", an excellent kind of chestnut. Today, Rivalto is a hamlet of Chianni and it also was the hometown of the Blessed Giordano da Rivalto, a preacher who was born in 1260 and who died in 1311 after he was called in Paris. Here, he would have taken the title of "magister", a honour that was attributed to illustrious scholars in the Middle Ages.