Colle di Val d'Elsa is located in the heart of Tuscany, in a strategic position, close to the cities of Siena, Florence and Volterra, along the route of the old Via Francigena 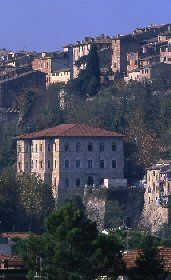 Colle di Val d'Elsa is located in the heart of Tuscany, in a strategic position, close to the cities of Siena, Florence and Volterra, along the route of the old Via Francigena, the medieval highway of long-haul pilgrims travelling to Rome from northern Europe.
The town originally developed in three distinct sites, each with different buildings and layout: Il Borgo of Santa Caterina, Il Castello di Piticciano, and Il Piano.
The first two settlements are the oldest, and were reserved for the local dominant classes. Situated along the same ridge in an east-west direction, and separated by a large dip or saddle, they look down on the valley below, where the third "borgo" stands, Il Piano, which is more recent in terms of its development, and which has always been the site of industrial activity.
Whilst the area of Colle has major archeological finds, dating to as far back as the 4th millennium BC, the first documents mentioning Colle di Val d'Elsa date to the 10th century. However, it was with the end of the 12th century that the town gradually acquired political autonomy and a political identity of its own: the first documented municipal statutes date to 1307.

Even in the medieval period the urban zone covered a large area which, as well as the upper part of town, comprised Il Piano which extended along the route of the original gore (water channels).
The gore are the artificial water channels supplied by water from the river Elsa, and were built over the centuries starting in the early 13th century, with the presence of numerous buildings which relied on water as a resource, such as water-mills, paper-mills, and fulling-mills.
In this sense, the gore were a crucial factor in the town's economy, fostering the development of industrial enterprises.
In its history, Colle di Val d'Elsa was the setting for frequent military events.
Among the most famous of these we would note the battle of 1269 between the Guelfs and the Ghibellines, which had significant repercussions for the political geography of Tuscany, and the siege of the troops of the Duke of Calabria, which took place in 1479 in defense of the territory of Florence, which led first to serious destruction, and later to further reinforcement of the system of fortifications. 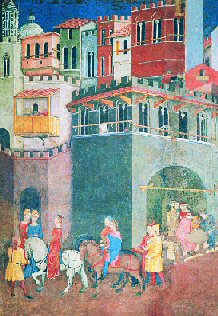 In the course of the 16th century, Colle di Val d'Elsa still gravitated in the orbit of Florence, gradually acquiring more and more power, above all thanks to the Medici family, and to illustrious figures from Colle who looked after administration on behalf of the Prince.
After the war of Siena and the formation of the Grand Duchy of Tuscany, in 1592 with the papal bull of Clement VIII, Colle became the site of a new diocese.
In the 16th century, with the Usimbardi family, a new chapter was begun in the history of modern Colle di Val d'Elsa.
On the threshold of the modern era, paper production was replaced by the new industries of iron and glass.
The industrial activity of Colle di val D'Elsa was marked above all first by the manufacture of glass and subsequently by the production of lead-crystal glass.
Indeed, as far back as the 19th century Colle was described as "the Bohemia of Italy", while nowadays it has become a full-scale "Crystal Town", making 15% of the world's entire output, and over 95% of Italy's output.

In Colle, the age of industrialization coincided with the advent of Socialism and periodicals linked to the new political climate, with the appearance of the newspaper "La Martinella".
A centre of art and culture throughout the 20th century, today the charming town of Colle di Val d'Elsa is home to over 20,000 people, with old and modern buildings nestling among the green hills which roll down to the river Elsa.
Individuals of international standing who were born here include Arnolfo di Cambio, a sculptor and architect who designed Florence Cathedral, and in more recent times Mino "the primitive" Maccari, and the writer Romano Bilenchi.

Visit Colle Val d'Elsa:
The gate on the Volterra road was built on the site of the outdated Porta Selva, which was destroyed by troops allied to the Sienese during the siege of 1479.
At the time, the bastions and the battlements were already present, while the gateway as it appears today, giving access to the Borgo di Santa Caterina, was built together with the new outer walls by the Florentine architects Cecca, Francione and Giuliano da San Gallo.
Passing through the gateway, one finds oneself in Via Gracco del Secco, the main road in the old borgo, which is bordered by large residential palazzi and local eateries.
Beneath their facades of yellow plaster, in the late 18th century style, which were added by Pietro Leopoldo di Toscana, one finds, standing opposite each other, the former hospital of San Lorenzo and the former San Pietro conservatoire, with its adjacent church. Both these buildings were built by the powerful Usimbardi family, to which the first Bishop of Colle di Val d'Elsa belonged. 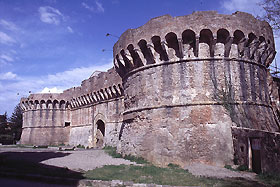 In olden times, to pilgrims travelling along the road from Volterra to Colle di Val d'Elsa, the sight of the majestic and impressive Porta Nuova ('New Gate'), with its large, round bastions, must certainly have been striking in its monumentality, as an emblem of the town’s beauty and importance.
The monument represented the central role played by Colle di Val d'Elsa in the war between Florence, with its dependent territories, and the city of Siena.
The former hospital of San Lorenzo, built in 1635, bears clear signs of Leopoldo’s extension, which was executed by Bernardino Fantastici; whereas the former San Pietro conservatoire, which was completed in 1606 to plans by Giorgio Vasari the Younger, was originally home to lay sisters of the Augustinian order, and was later a home for young girls, and is now a museum.
The exhibition area, which currently offers extensive space for temporary exhibitions, houses the municipal collection of the Civic and Diocese Museum of Religious Art. One of the Museum’s masterpieces is the Maestà by the Badia a Isola Master, painted in the style of Duccio. The collection also boats a rare eucharistic set dating to the VI century, and a wooden crucifix by Marco Romano, as well as a large group of works of art ranging from the medieval period to the 20th century.
Passing through the Santa Caterina Borgo, one sees the remains of the homes of numerous merchants dating back to the 13th and 16th centuries, in which one can still pick out the original shape of the towers, and from Piazza Baios one can admire the towered structures of the medieval buildings in Via dell'Amore and Via del Refe Nero.
The only surviving part of the old Porta Vecchia (demolished in 1764) is the imposing Renaissance bastion which was used as a water cistern, and from which the network of the town’s water conduits used to lead, supplying fresh water to the Mercatalis Fountain, situated in Piazza Santa Caterina.
Continuing down the road, one comes to the 15th century church of Santa Caterina d'Alessandria (showing signs of major renovation), adjacent to which are the Oratorio dei Filippini and the Oratorio della Compagnia dalle Croce, where can still find the early 16th century terracotta group showing the Lament Over the Body of Christ, attributed to Zaccaria Zacchi.

The square opposite the house identified as that of the humanist and Lutheran theologian Aonio Paleario - who was burnt at the stake in 1570 in Rome - offers a welcome spot where one can relax in the shade of the trees and admire the attractive countryside of the Tuscan hills, and a fine view of the Church of San Francesco, one of the first sites of the Franciscan Order in Tuscany (1229).
Church of San Francesco, which stands alone atop the hill opposite the Castello district, is reached by crossing a 14th century arched bridge, which was built to join the monastery to the Borgo of Santa Caterina.
In the church, whose plan is late Romanesque, hidden beneath 17th century overpainting and stucco-work, one can see paintings spanning the period from the 13th to the 15th centuries, including work by two local artists from Colle, Giovan Battista Tolosani and Cennino Cennini, the famous author of the Libro dell'Arte (Book of Art). In the cloister one can still find remains of frescoes and various preparatory drawings for frescoes by painters from the school of Duccio di Boninsegna. 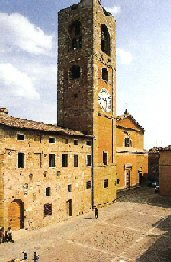 From Piazza Santa Caterina, continuing along the main road flanked by aristocratic palazzi, one reaches Palazzo Renieri-Portigiani, currently the home of the town hall - fronted by a facade in ashlar masonry and a huge crest of the Medici family.
The palazzo was built at the request of Bernardino Renieri, who held the post of engineer at the French court of Charles IX, and who was appointed "Guelfa architect" in the service of Francesco I de' Medici. Dated to between 1575-1580, the building is stylistically similar to the palazzi designed in the Florentine 'manner' by Bartolomeo Ammannati, and is marked by the two-tone use of colour based on terracotta tiles and travertine.

Alongside the Town Hall stands the Campana bridge, which joins the Borgo and the Castello districts, giving access to the town center.
Today, the difference in ground level, which provided the town with a natural means of defense, is spanned by an impressive brick-built arched ramp, forming an introduction to the stupendous architectural scenario of Palazzo Campana.
It was built on the site of the medieval Porta a Ripa, between 1539 and 1550, on the orders of Francesco Campana, secretary to Alessandro and Cosimo dei Medici, to plans by Florentine architect Giuliano di Baccio d'Agnolo, known as Il Baglione.