This corner of Tuscany, squeezed between the Apuan Alps and the Tuscan-Emilian Apennines, is an enchanting area, which unites art, history and nature in perfect symbiosis.

We are in the Middle Serchio Valley, the northeastern part of the province of Lucca. This corner of Tuscany, squeezed between the Apuan Alps and the Tuscan-Emilian Apennines, is an enchanting area, which unites art, history and nature in perfect symbiosis.
The terracing with their vineyards and the colored fields descend down to the valley of the Serchio river, speckled with villages enveloped in the clean, pure air. The simple but beautiful parish churches, the villages and the ruins of castles are the watchful observers of the passing of time.
Rising among these villages is Coreglia. Protected by the Apennine peaks of Giovo and Rondinaio, it overlooks the Serchio valley from a cliff that turns pink at sunset, standing there for a thousand and more years, in the shadow of a tower reach toward the clouds.
Its position between woods and vineyards, the Romanesque ruins, the partly still visible fortifications built by Castruccio, the Ghibelline condottiere, and the powerful backdrop of the Apuans, make it a relic of the past - even today, now that it has become a renowned summer resort area.
There are two churches worth making a special trip to see.
The Church of S. Martino is pre-Romanesque, and is one of the oldest churches in the Lucca area. Built in the 9th century, it was enlarged in the 10th with the interior arcades, supports, capitals and the apse visible today. Further remodeling was done in the following century, while the asymmetrical façade is due to the changes made in the 16th and 17th centuries. The bell tower is from 1854.
The Church of San Michele is a true treasure chest of art, built in the 11th century next to the fortress and its tower, which was transformed into a bell tower. Inside, the pre-Romanesque ambo portraying a cow is probably the oldest pulpit support base among all the churches in the Val di Serchio. There is also a beautiful 15th-century wooden crucifix, obviously influenced by German art, and an outstanding pair of marble statues of the Blessed Virgin and the Angel of the Annunciation. The drapery of this work, sculpted in the 14th century, recalls that of the dancer by Giovanni Pisano, and could belong to the manner of Giovanni di Balduccio.
As regards civic buildings, the 16th-century urban fabric (although modified in many instances) of Coreglia includes a number of handsome edifices, such as the Town Hall, built in 1572, Palazzo Antonimi and Palazzo Vincenti. Benedetto Puccinelli, one of the greatest Italian botanists of the early 1800s, was born in Palazzo Vincenti. Dominating the upper part of the village is Palazzo Vanni, which houses the Museum of Plaster Figurines and Emigration.
The enchanting view of the Apuan Alps, silhouetted in the western sky, and fortified by that of the Apennine hills descending toward the Serchio, is a balm that soothes the pains of the world.
Not far away is the fortified village of Ghivizzano, included among the lands of Coreglia in the Early Middle Ages. It is well preserved and still retains its atmosphere of centuries past.

IN THE AREA
Piano di Coreglia
The name of this village once described the district which was made up of a number of small hamlets; Cistrigana, Colle Bertingo, Manciana, Curchi and Ansugo. The first two were densely populated in medieval times but were destroyed in the XV century. The district assumed the name Piano di Coreglia in the XVI century. 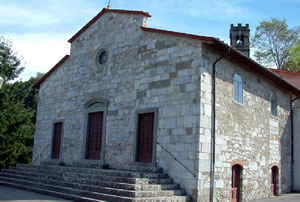 Gromignana
This is an old village standing at an altitude of 610m. asl and the site of an old castle, which was destroyed in the XV century. The Oratorio di S. Ansano stands on a hill above the village can be reached by a footpath known, as the “Sentiero Natura” from here there are wonderful views of the valley and mountains around it.

Lucignana
The village is built on a mountain ridge at an altitude of 450m. asl, in the past it was part of the feudal estate of the Rolandinghi and then the Bizzarri family until the end of the XII century. Traces of these small but powerful families and later ownership by Lucca can be seen in the remains of the castle. From the castle there is a fine view of the narrow road that runs through the village with little streets running off it between the houses. There is a footpath leading to the Oratorio di Sant’Ansano on the hill above the village. 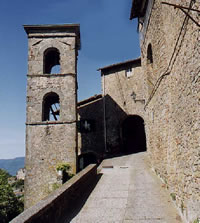 Vitiana
An old village that was once the site of a fortress belonging to the city of Lucca, a defence point on the Val Fegana, it stands at an altitude of 450m.asl. Inside the village there are stone paved streets, narrow alleys with arches over them and stone door surrounds. The church is Romanesque.

Tereglio
Tereglio is Ligurians originally settled it in the III century BC. It was strengthened and defended by a wall, which is still visible in places such as IL Fortino and the town gate entrance Porta Mezzana. The village has an elongated lay out following the mountain ridge on which it is built.
The church dates back to the XIII century, it has a wooden panelled ceiling and is dedicated to S. Maria Assunta. Inside it has a XIII century crucifix known as the “Crocifisso Berlinghieri” and an XIV century Annunciation in wood.

GHIVIZZANO
In the year 1000 the town part of the feudal lands of the Rolandinghi, it then passed to the city of Lucca, and grew in importance under Francesco Antelminelli, Conte di Coreglia, who lived here from 1329 to 1355. 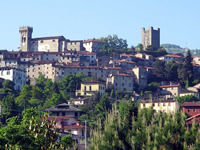 From 1438 to 1441 it belonged to Capitano di Ventura Francesco Sforza. Amongst the interesting things to see are the old medieval tower that is part of the Castle, this can be visited by appointment, the attractive medieval streets with archways and a most an entire underground street and narrow passageways between the buildings that connect the centre of the village to the defensive walls. The XIII century Romanesque church has an imposing bell tower with marlins dedicated to San Pietro e Paolo. Inside it has a fresco of the “Assunzione Della Vergine”. The little Romanesque church of S. Antonio is worth seeing with its baptismal font of 1400. There are a number of votive shrines around the town on the road side and built into the houses.