Fauglia has preserved the features of the typical rural town as evidence of a farming settlement that has all but disappeared. 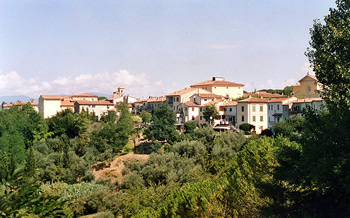 Fauglia has preserved the features of the typical rural town as evidence of a farming settlement that has all but disappeared. When the castle was destroyed in 1433 at the hands of the Florentine, the town gradually began to rebuild the structure that can be seen today along the ridge of the hill.
The one street that runs through the town is lined with buildings and structures that were primarily erected between the 17th and 19th century when the zone was enjoying its greatest prosperity. The town hall, the old church bell and Chiesa di San Lorenzo, are some of the points of interest in the town. Underground corn depots have recently been discovered in Piazza del Mercato and are worth visiting.
The surrounding areas treat visitors to the most striking views of the Pisan Hills while the territory is primarily hilly, there is no shortage of level areas including those around the neighbourhoods of Valtriano, renowned for its furniture manufacturing, and Acciaiolo. Although most of the population was dedicated to agriculture at one point, apart from DOC wine production, the primary activities are trade and the general service industries.
Fauglia is renowned for its villas, which have hosted noble figures, intellectuals and artists. Villa Trovarsi is a particular highlight, belonging to the famous actress Marta Abba who named the villa in memory of a play which Pirandello dedicated to her.
There are two museums in Fauglia connected to the activities of two noted artists: Alvaro Marioni, painter and engraver, and Giorgio Kiernek, a post-macchiaiolo painter whose paintings immortalised the surrounding countryside.