The Uffizi Gallery is one of the greatest museums in Italy and the world. It was founded in 1581 by Francesco I de' Medici, who collected numerous artworks in the building designed by Vasari.

Today the Uffizi contains masterpieces by Italian and foreign artists from 13th to 18th century such as Cimabue, Giotto, Masaccio, Beato Angelico, Leonardo da Vinci, Botticelli, Michelangelo, Piero della Francesca, Raphael, Caravaggio, along with Rubens, Rembrandt, Dürer, Goya and many others. The Vasari Corridor that connects the Uffizi Gallery with the Pitti Palace hosts a rich collection of self-portraits by past and present artists. Built by Vasari in 1565, it passes above the Ponte Vecchio, the oldest bridge in the city, with its many jewelry shops. The same building houses the Contini Bonacossi Collection.
MUSEO FIRENZE COM'ERA AND MUSEO DI PREISTORIA
The Museo e Istituto Fiorentino di Preistoria and the Museo Storico Topografico "Firenze com'era" are situated in the former convent of the Oblate Nuns, whose buildings were once part of the Arcispedale di Santa Maria Nuova, the city's oldest (and still functioning) hospital that was founded by Folco Portinari in 1286.

OPIFICIO DELLE PIETRE DURE
The Opificio was founded by Ferdinando de' Medici in 1588. It is an important center for the restoration of inlays and mosaics, and it has a fine display of inlays, studies and drawings.

MUSEO NAZIONALE DEL BARGELLO
This building dates from 1255, when it was built as the seat of the "Capitano del Popolo", the commander of the local militia. Later it became the seat of the "Podestà" and then of the Capitano di Giustizia (the magistrate) or "Bargello", from which it gets its name. Since 1859 it has been the home of the National Museum dedicated to sculpture and the minor arts. It contains masterpieces by Brunelleschi, Michelangelo, Cellini, Giambologna, and Donatello along with priceless ivories, enamels, jewels, tapestries and weapons.
The Badia Fiorentina, the city's oldest monastery (978) is just a short distance from the museum. Here there is a masterpiece by Filippino Lippi. And nearby in the Palazzo Nonfinito is the rich Museum of Anthropology and Ethnology, while the Museo Casa di Dante (Dante's house) is right behind the Badia. 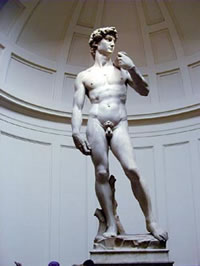 GALLERY OF THE ACCADEMIA
This is one of the best known museums in Florence, because it houses famous sculptures by Michelangelo, including the "David". There are also many paintings, collected by the Grand Duke Peter Leopold to help the young artists enrolled in the Accademia d'Arte, which is still next door to the gallery.
GALLERY OF THE ACCADEMIA
Via Ricasoli 60 - Phone +39 055 2388609
Working day: from 8.15 to 18.50
Haliday: from 8.15 to 18.50

UNIVERSITY MUSEUMS AND BOTANICAL GARDENS
The entrance to several of the University's scientific museums are on Via La Pira: Geology and Paleontology, Mineralogy and Lithology and the Botanical Gardens, or "Giardino dei Semplici", founded by the Medici and then enriched under the Lorraine rule; the Botanical Museum, on the other hand, dates from the 19th century.