The Fulloni, the bellows foundries, or perhaps the Folliculum, a small made manual bellow in goat skin, gave the name to the village of Follonica.

The 'Fulloni', the bellows foundries, or perhaps the 'Folliculum', a small made manual bellow in goat skin, gave the name to the village of Follonica.
The village expanded greatly thanks to the iron and cast iron working.
Follonica became, for its geographical position and its ancient traditional melting skils, the center of the Tuscan Grand Duchy economic re-balancing.
Leopoldo II wanted in Follonica, where there were already some ironworks, a foundries area called Imperial Royal Foundries. They rapresented at that time an industrial complex that was in the van in that activity.
The nucleus of the actual town was born in 1832 when houses for skilful workers were built around the furnaces, realizing a village-factory.
The population growth was evidence of the Grand Duke of Tuscany good government: in 1854 its inhabitants were hardly 364, in 1880 they were 3193, after the second world war 7000.

VALLI CASTLE
Valli Castle is the most ancient medieval settlement in the territory of Follonica, and it is mentioned in a document which dates back to 884.
The complex is four kilometers far the town. Valli Castle - today transformed in a residence - is completely altered regarding its original appearance.
HISTORY
The Castle, cited in a document of the 884, now conserved in the archiepiscopal archives in Lucca, had belonged to the Abbey of Sestinga since 1106. The small village born close to the castle, was acquired in 1161 by Ildebrando di Arrigo, Earl of Forcoli, who yielded the right to collect the bishop of Massa tenths
The property of the castle passed to the Aldobrandeschi and then, in 1278, to Pisa.
In the XIV century it was acquired for 500 fiorini, by Gherardo Appiani entering therefore to share part of the dominions of the Lordship in Piombino together with the territory of Follonica, that controlled it up to 1838.

MONTIONI NATURAL PARK
Montioni natural Park is in the provinces of Grosseto and Livorno and belongs to the municipal districts of Follonica, Suvereto and Piombino.
It lies between the river basins of Cornia (to the north) and of Pecora (to the south) and it is almost entirely covered by forest.
Up to the half of the XX century, the exploitation of the park for the production of coal, degraded the forest and the so called Mediterranean 'macchia', that is an artificial forest, where prevailed the essences of fast growth as the broom, the small frassine, the carpino, the corbezzolo, took its place. An indiscriminate and quite easy cut of the new vegetation could be planned every 11 - 12 years to obtain a good coal of medium dimension. 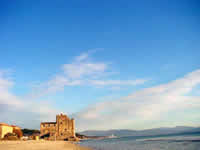 After the giving up of the coal production, the spontaneous growth of the most resistant species started again: among the hightest ones, the ilex or holm-oak are present at every heights, while the oak and the carpino in the valley.
The forest trees are reproducing, above all in the inner zone named 'Tre cancelli' , considered a Natural and Integral Territory near the Pieve of the Pastorale, the ancient atmosphere of the Mediterranean 'ilex grove' .
The Park has an extension of approximately 7000 hectares and reaches its maximum height of 300 meters in Poggio al Checco.
In the Park there are many important historical and artistic evidences: the rests of Prehistoric settlements and of Etruscan and Roman age, medieval buildings as the Pievaccia (or Pieve of the Pastorale), the ruins of a Castle in Old Montioni, the Thermal Baths in Montioni and an alum quarry .