Sea and culture are the two characteristics of Forte dei Marmi, one of the most famous tourist centers in the Tuscan shore. 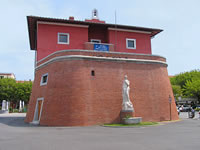 Sea and culture are the two characteristics of Forte dei Marmi, one of the most famous tourist centers in the Tuscan shore. A town rich in history, Forte dei Marmi began to expand decidedly at the beginning of XVI century, with land reclamation works that went on across the entire XVII century and ended with the construction of the fort in 1788, from which its name derives. In the XIX century the village started to develop into the splendid sea town full of tourist that all we know today. In addition to the beauty of its beaches and its center, Forte dei Marmi is famous also for its festivals (of Sant’Ermete and San Francesco) and for its markets (Antique fare , weekly market in Marconi square, and at Victoria Apuana). The sea is not the only attraction in Forte dei Marmi, as also its hinterland is rich in history, culture and ancient traditions. Here you can undertake interesting excursions to discover the Apuan Alps and the entire Province of Lucca. The center of the town is rich in shops and high fashion boutiques with designer's clothes and it is a must for visitors to go out shopping also late in the evening. 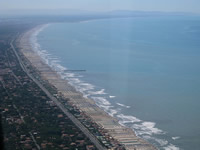 FORTE DEI MARMI TODAY
One of the most popular bathing resorts of the Tyrrhenian sea, Forte di Marmi owes its name to the ancient port used for the transportation of marble. For more than a century Forte dei Marmi has been an exclusive holiday resort, once frequented by the famous, for example: D'Annunzio, Duse and Montale. Because of its peaceful atmosphere and mild climate, it is the preferred destination of those who shun mass tourism.
Here one can take part in all kinds of sports; water sports in the sea or lake of Massaciuccoli, and mountain sports in the nearby Apuane Alps. To visit: the remains of the Forte dei Marmi, the Iron Factory, the Area of the Roman Empire, the Museum of Satire and Caricature and the Modern Art Gallery.
Numerous events are held in the Fort including the well known Festival of Satire and Caricature, in which cartoon artists from all over the world participate and the Jazz'n Forte Festival. In August, celebrations including a magnificent firework display, are held.