Fosdinovo dominates today still with his intact fourteenth-century massive structure, from the tall one of his 550 meters altitude, big part of the coast underlying Tirrenica. 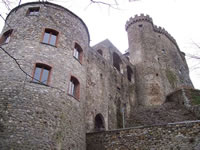 Fosdinovo dominates today still with his intact fourteenth-century massive structure, from the tall one of his 550 meters altitude, big part of the coast underlying Tirrenica, distant about ten kilometers, and of the val of Thin that is opened to his shoulders. The position was ideal to check the result to the sea of the Lunigiana and its roads and passes appenninici, among the more you frequent of the Middle Ages.

The suburb:
With its 12th century walls still intact, Fosdinovo Castle crowning a hill 550 meters high. The castle still dominates a great part of the Thyrrenian coastline. During the Middle Age its position was ideal to maintain control of the Apennines outlet to the sea and the Lunigiana region, with its roads and mountain pass linking the Thyrrenian coast to northern Italy.
One of the coat of arms walled on the main gate walls.

We have records of the existence of Fosdinovo Castle as fief of the Erberia family since the year 1124, under the direct control of Bishop-Counts of Luni. This arrangement continued until 1317, when the unstoppable rise of the marquises Malaspina, strictly connected with the Ghibelline cause, brought the Episcopal power to a rapid decline and the leader of the family Spinetta Malaspina took possession of the castle. Immediately after Fosdinovo was conquered by the great commander Castruccio Castracani, Lord of Lucca, that besieged the castle with 6000 soldiers and 1000 knights. In the 1334, after the decline of Castruccio, the castle returned into possession of the Malaspina .

The front towards the town with one of the powerful round towers.

At the beginning of the 14th century the Malaspina, now masters of the entire Lunigiana thanks to the help of the powerful family of the Scaligeri of Verona and Enrico the 7th, moved the seat of the family from the nearby castle of the Verrucola di Fivizzano to Fosdinovo, and made the village the administrative center of their lands. The castle was enlarged. The original keep of the 12th century was widened and strengthened with turrets and a new cylindrical tower, ghibelline battlements (with 'tail of swallow' form), machicolation on the sides towards the Lunigiana and with towers and ramparts on the side facing the village; inside, the castle became one of the finest nobiliary residences of that time, rich of frescoed rooms. The magnificent inner courtyard was a 16th century addition. Over the main gate, defended by a breteche, is still visible a coat of arms representing a dog holding a plant with thorns (known as "Spino") in its mouth to symbolize the strong alliance between the Malaspina and the Scaligeri. All around, in the walls are opened gun loops for cannons and other fire arms. 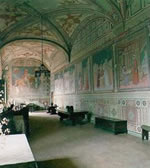 The castle has the reputation of 'indestructible' and even the earthquake of 1922, that destroyed great part of the Lunigiana, made no serious damage to its structure. A legend says that the great poet Dante Alighieri passed some days at the castle, an event historically impossible. Another legend is connected with the presence in one of the rooms of the castle of the 'well of oblivion': the marquise Cristina Adelaide Pallavicino, bride of Ippolito Malaspina, attracted her lovers into this room and then threw them down in this pit full of blades which ended in a water channel beyond the walls. Most likely the trap was used, but for the elimination of enemies! The castle is still owned by the marquises Torrigiani-Malaspina and it's visible by a fee.

The legend wants that also in this castle Dante Alighieri has sojourned, of fact the event is historically impossible.
Another legend is tied up to the presence in one of the rooms of the castle of the well of the dimenticanza':

it is told that the marquise Cristina Adelaide Pallavicino, bride of Ippolito Malaspina, attracted her own lovers in a room and once satisfied his instincts them facese to fall in the booby-trap irto of blades that flowed nearby then in a channel. The trabochetto was used more probably, but to eliminate the political enemies of the powerful gentlemen!
It anchors the castle today it is ownership of the marquises Torrigiani-Malaspina, recently has suffered an important work of restauration and it is visitable to payment on appointment. 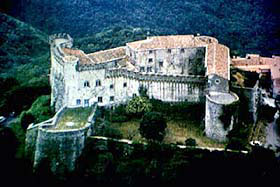 Useful information:
Is possible to visit the castle.
Visits are with guide.
For information and bookings:
phone 0187/680013-68891