The Salamartano hill in Fucecchio offers a beautiful view of the Valdarno Inferiore from the plain with many villages to the hills of Le Cerbaie, until Serra mountain and the Apuan Alps. 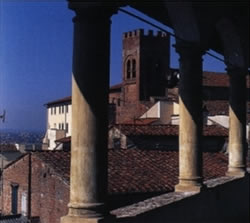 The town centre
The Salamartano hill, which is the religious centre, offers a beautiful view of the Valdarno Inferiore from the plain with many villages to the hills of Le Cerbaie, until Serra mountain and the Apuan Alps. Here lies San Salvatore church and abbey and the Collegiate church Saint John the Baptist, here built during the XIIth century, but completely restored end enlarged between the XVIth and the XVIIIth century. Beside San Salvatore church there is the "Sala del Poggio" (Hill lounge), previously called Chapel of Mercy, now used as auditorium for meetings and conferences.
By the Salamartano hill lies Vittorio Veneto square, the ancient large square, which was the link between the religious and the civic centre of the village. From here, through a stone ramp, it is possible to reach the "Corsini Complex", which includes the palace, the ancient farm and the fortress with a large park from the XIVth century. In the south part of Vittorio Veneto square there is the Podestà Palace or Palazzo Pretorio. After a short stretch in Via San Giovanni there is Palazzo Montanelli della Volta, another example of civic building from the medieval time, which has been strongly modified during the centuries.

SALAMARTANO HILL
The "mountain" or "poggio" Salamartano already appears in documents from the eleventh century, in which there are descriptions of the hill by the Cadolingi's castle of Salamarzana. In 1106 it was given to the Abbot of San Salvatore church in order to build a new monastery, destroyed by a flood of the Arno river. In the same period also Saint John church was built, before only a baptistimal font in charge of the abbots. After some time the hill was surrounded by walls and used as cemetery. In 1984 it was paved with bricks. On the floor there are four small marble spots which show the space occupied by a medieval house (XII century); its remains, discovered in 1984, are in the Communal museum. 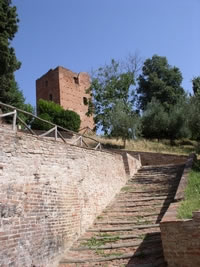 SALAMARZANA CASTLE
This complex in the town centre was called Salamarzana Castle during the Middle Age and from here Counts Cadolingi could control the ford and the bridge over the Arno along the Via Francigena. The area includes the medieval towers, the park (about 4 hectares) and some buildings with common spaces.
The main building of the previous Corsini farm appears today as it was structured during the XVth and XVIth century and it is directly linked to the park and the fortress. Until the XVth century the palace and the fortress were two separate buildings, the second one was probably the seat of Salamarzana castle, belonging to the Cadolingis from the XIth century, later seat of the donjon, as documents of the communal period (XIIth and XIIIth century) testify. About in 1330 the fortifIcations were restored according to the will of the Florentine authorities. In that period the farm's palace was actually the house belonging to the Rosselminis, a very powerful family which possessed the palace and some houses, all opening onto a cloister communicating with an old castle's gate.
At the beginning of the XVth century , when some Florentine families became the owners of the buildings and the fortifications, the two areas were united. In 1460 the palace, was bought by Giovanni Cosimo dei Medici's son, then it passed to Lorenzo and finally to the hospital of Altopascio. During the Medicis' period the building was restored and got its actual shape. The fortified area had lost its strategic function and was used as foodstaff store. Marquises Corsini bought the estate in 1643, and the fortress in 1864 from the local administration. The cycle ended in 1981 when the local administration bought the whole complex again.

THE PALACE
The building has three floors and in the last one there is an elegant ''loggetta'' with brick columns above the original front. The palace al so included one of the gates opening onto Niccolini square (la piazzetta) and leading to the main ''villages''.
As the palace was originally made of two bodies unitied in the XVth century, traces of the medieval buildings are still clear: in the first floor a decorated brick arch in the north side, a fragment of a fresco from the XIVth-XVth century and some paintings (landscapes, frames) by Stefano Fabbrini from the first part of the XVIIth century. Two wings of the building were previously used far the estate, now they house the Library, the Historical Archives and part of the Museum. 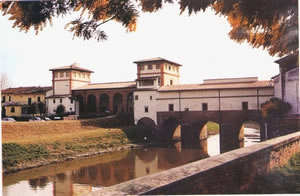 The Medicean bridge in Cappiano
The first information about a bridge in Ponte a Cappiano are from the Middle Age when the Via Francigena, after reaching the woods of Le Cerbaie crossed the Arme or Gusciana river, effluent of the Padule di Fucecchio. It was a fortified bridge with a fish weir and a mill and it was the centre of
many battles between Lucca and Florence at the beginning of the XIVth century. From the beginning of the XVth century it was used by the Republic of Florence as lock to regulate the water flow of the Padule and to form the so-called "new lake" that gave a lot of fish to the Florentines.
The bridge was rebuilt in 1550 under Cosimo I de' Medici by a very prestigious staff, among which the "water engineer" David Fortini and Niccolò Pericoli, called Tribolo, sculptor and architect. Cosimo himself partecipated to the planning of the bridge, a very particular and multipurpose building with a fortified bridge with two towers, openings (calle) for the passage of the boats along the Usciana river and for lowering the nets to fish eel, a weir to control the water level of the Padule and of the "new lake", a "machine" for the utilization of water's motive power for a mill and ironwoks beside the bridge. Beside all these functions the building also had a palace with the administration of the Medici's estate, created in the XVIth century and sold by the Grand Duke only at the end of the XVIIIth century according a reforms' plan.

San Salvatore church
Founded by Count Cadolo in the village of Borgonuovo by the Arno, San Salvatore church appears for the first time in a document from 986. Around the year Thousand Cadolo's son, Lotario, founded a monastery near the church and gave it to the Benedictines. In 1106 a flood of the Arno destroyed these buildings, which were rebuilt on the hill near the Salamarzana castle, on a land donated by Count Ugolino. In the second half of the XIth century the monastery went to the "Vallombrosani" religious order and with the Abbot Pietro Igneo it became very rich. This period of prosperity ended with the extinction of the Cadolingis after Count Ugolino's death. At the end of the thirteenth century it was given to the nuns of Santa Chiara from Lucca, called Gattaiola's nuns; they charged the Franciscan monks to take care of it, but maintened the spiritual jurisdiction and, as Pope Gregory VII had declared the abbey free from any bishop's authority in 1085, the abbess of Gattaiola arrogated the right to be called "Bishopess", and maintained it until 1622, when the diocese of San Miniato was founded. After the removal of the Franciscan monks in 1783, awing to the reforms of Grand Duke Leopold, the monastery was transformed in a conservatory and went under Clarisses'rule.

The Surrounding
The territory of Fucechio country is very particular and varied.
Nearly two third of communal territory are included in the Cerbaie, low hills with a very gentle outline from the basin of former marsching land of Bientina in Fucecchio. From Ponte a Cappiano through Ramoni street we reach the village of Torre, the ancient Ultrario (beside the stream), the first informations about this place and its S. Gegorio church are from the XIth century.
After Torre along via Ramoni there is Massarella, the ancient Massarella Piscatoria (from Masarella-many farms-and Piscatoria-fishing).Its parish church from the XVIIth century is called S. Mary and with this name it already appears in a diploma from 998 by emperor Otto III. From the surroundings of Massarella there are beautiful views of the Padule.
Followings Padule we reach Querce a village with S. Nazario church from the IXth century. It was originally in a secluded place where now is a small building called ''cellina'' built in the place wheer the Virgin appeared in XVIth century.
Another village along the Via Francigena is Galleno which developed thnks to the pilgrims. Beside the parish church from the XVIIth century there is an ancient road, among woods and fields, which corresponds to the ancient Via Francigena, before it was devisted in more recent times.

The Cerbaie
Nearly two third of the communal territory are included in Le "Cerbaie", low hills (they seldom reach 100 m a.s.l.) with a very gentle outline from the basin of the former marshing land of Bientina to the marshing land in Fucecchio. The origin of the name is not certain: maybe it comes from the originary vegetation, oaks (cerri), or from the ancient presence of deer (Cervaia), or even from the not so rich soil (Cervara=untilled soil). The area is a very important ecological resource with a very rich vegetation: woods with cluster pines, turkey oaks, sessile oaks, british oaks and false acacias. In the most humid valleys a very particular microclimate fosters the survival of extinct species: beside alders and horn. beams, there are some specimens of rare silver firs; the underwood is made of holly, even very tali, viburnum, strawberry tree, heather, ling and some very rare species like Drosera rotundfolia, a carnivorous plant of the tundra from the gladal age., or like Osmunda regalis (flowering fern), typical of the tropical climate. The fauna is also typical of the tuscan woods: badgers, porcupine, squirrels and megpies, green woodpeckers and jackdows.
The landscape of Le Cerbaie is the result of these precious elements together with men's work.

The Padule of Fucecchio
The Padule of Fucecchio formed during the historic period owing to the stagnation of waters which came from the mountains of Valdinievole and stopped by the warps of the Arno river. The rnarshing land itself is about 1800 hectares and not deeper than 3 meters , while the whole area is skm 443. The Padule is a very remarkable place where many interventions have altered the original life.
Here, as well as in Le Cerbaie, the flora is the result of cold and warm climate and of a very particular microclimate which favoured the development of these plants, and mostly of sedges, traditionally used far chairs and flasks, substituted today by poorest reed. There are different kinds of sedges which grow like small isles or like floating leaves, water lilies, duckweed and humid meadows; very important are the wood of Chiusi and Paduletta di Ramone near Castelmartini (Larciano) where the cluster pines cohabit with oaks and other rare vegetable species