Gaiole in Chianti has developed along the valley of the River Massellone due to its idea position as a trading and meeting point and its origins are based in these very geographical characteristics.

The Gaiole in Chianti has developed along the valley of the River Massellone due to its idea position as a trading and meeting point and its origins are based in these very geographical characteristics.
In fact, even prior to the year 1000 the hills surrounding this valley were populated and it was these inhabitants who came down into the valley to meet and trade; they gave life to the centre that then became the main focal point of the whole valley.
Offcial documents dating back to 1215 show its importance as a trading post and this was to carry on expanding with the constitution of the "Lega del Chianti" in 1300 with Gaiole as the head of the "terzieri" together with Radda and Castellina.
The "Leghe" formed the basis for political and administrative division in the country areas under Florence and when necessary provided both money and soldiers. For four centuries the borough of gaiole was considered the border between Florence and Siena and was consequently a target for raids and plundering until the definitive fall of Siena in 1555.
The system of the "Leghe" remained with both the Medici and the Lorena until 1776 when the "terzieri" of Chianti became the actual boroughs of to day.

History:
Settlement in the area around Gaiole undoubtedly began in extremely ancient times, as attested by numerous place names of Etruscan and Latin origin as well as by archaeological evidence found at Cacchiano (remains of a 2nd- and 3rd-century cemetery) and at the San Marcellino parish church. The ancient settlements would seem to have been concentrated in the communities of San Giusto in Salcio, San Polo in Rosso and Spaltenna, in the mediaeval diocese of Fiesole, and San Vincenti at Arezzo. All these parish churches have preserved their original floor plans as well as highly interesting traces of Roman structures. Many of the parish chapels that are dependencies of these churches are also noteworthy for the same reason. The countryside around Gaiole is dotted with many castles due to the strong influence of the Firidolfi family, from whom the Ricasolis are descended, and later, by the Florentine Republic’s need for defensive positions. In some cases the ancient castles have been transformed into villas. Among them are Meleto, San Donato in Perano, Rentennano and San Giusto alle Monache. Brolio castle, cradle of the Ricasoli family, is a special case. Its defenses were rebuilt near the end of the 15 C, perhaps by Giuliano da San Gallo, and were one of the first examples of ramparts supplemented by bastions. Baron Bettino Ricasoli rebuilt the castle in the 19 C, converting it into a villa in neo-Gothic style. The existence of so many castles in the immediate area was responsible for the rise of Gaiole as a marketplace. It is located on the valley floor along the road leading from the Chianti area to the upper Arno Valley. Gaiole is mentioned for the first time toward the end of the 11 C.

Gaiole in Chianti and its castles:
Brolio Castle
Meleto Castle 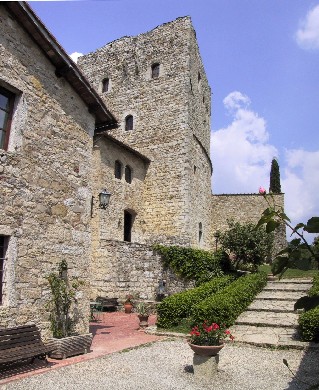 The Castle of Tornano stands crowning a hill in the heart of the Chianti area, equipped with one of the most beautiful and particular Keep between all those of the medieval castles of Tuscany. In the first years of the 11th century Tornano was seat of a curtis and its name appears many times, in the documents conserved in the near Abbey of Coltibuono, as place where were stipulated many contracts . The castle was ownership of the senese nobleman Guarnellotto dei Mezzolombardi. He came in contrasts with the emperor Frederick I and in 1167 Tornano was gave in fief to Ranieri de' Firidolfi Ricasoli but Guarnellotto, supported by Siena, maintained the control of this castle and of the nearby castle of Campi.
Only when the castle became part of the Florentine peasantry was subtracted to the control of Guarnellotto, but Siena never renounced to Tornano that, thanks to its position on a hill at control of the Massellone torrent, was one of the most important strongholds on the chessboards of the Chianti region. In the 1229, after a long siege, the Sienese army conquered the castle to loss it definitively only six years after. In 1400 Tornano was strongly fortified by the Ricasoli and during the Aragonese invasions it was never overcome by the enemy troops. There was nothing to do in the 1530 when imperial troops shaved it partially to the ground.

Gaiole in Chianti: discover the surroundings