Gavorrano, lying on a smoothly shaped hill lending towards the seacoast of Follonica, is in the province of Grosseto and has been an important mining centre.

Gavorrano, lying on a smoothly shaped hill lending towards the seacoast of Follonica, is in the province of Grosseto and has been an important mining centre. Caldana and Ravi, together with the remains of the Rocca of Castel di Pietra, are important testimonies of this small town's medieval past. 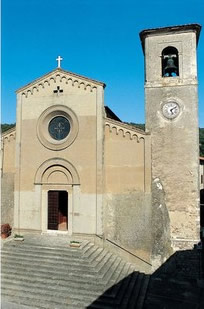 The first news on Gavorrano, that now has about 8000 inhabitants, date to 1164, when the emperor Frederick Barbarossa issued an act reiterating that the counts Alberti of Mangona owned the castle.
Around the XII century, the counts Pannocchieschi established their presence in the area around the XII century thanks to the emperor's concession.
This Byzantine-born family, that was not very powerful outside its modest properties, became famous thanks to Dante Alighieri. The illustrious poet narrated the story of Pia, the young bride of one of the Pannocchieschi who, later, also killed her.
Since 1271, when a group of rebel Ghibellines from Siena occupied the town for a short time, great fights for the control of Gavorrano started.
At the end of the century, its inhabitants spontaneously submitted to Volterra. In 1338, Massa Marittima took control of it, but when the Republic of Siena subjected Massa Marittima in 1335, the City of the Palio' authority was imposed in Gavorrano.
The Malavolti controlled the castle until 1465, but their presence, too, was interrupted in some periods. In 1390, Florence temporarily occupied Gavorrano, an episode that was repeated in 1450 with the monarchy troops of the King of Naples, Alfonso d' Aragona, as protagonists. Around the half of the XVI century, the Tuscan Grand Duchy definitively annexed the town together with all the Sienese territory.
The above-said Castel di Pietra has a particular historical and artistic importance, since it has architectural elements belonging to the first Etruscan settlements raised on the ways used for the iron and steel activity. What remains of its structure is a series of rearrangement works due to each property changeover. It belonged to the Aldobrandeschi, first, and then to the Pannocchieschi.