In the ancient times, Greve in Chianti was a small built-up area of the territory called "Agro di Florentia", even if expert and researchers of the Etruscan civilization claim that it can date back to a previous century. 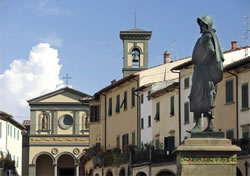 In the ancient times, Greve was a small built-up area of the territory called "Agro di Florentia", even if expert and researchers of the Etruscan civilization claim that it can date back to a previous century. Yet, the Romans were the population who left the local toponyms as a patrimony for their constant presence and for their closeness to the Cassia way. Siliano was an example of this. It is in the territory of the modern town and it took its name from a colony of Sulla's veterans settled here.
This town originated in the Middle Ages. A donation by Bernardo degli Uberti has been found. In the XI century, he ceded the monastery of San Salvi the ancient settlement set on the Hill of St. Francis that took its name from the small Franciscan community that settled here after founding a hospital.
The future village of Greve developed in the years thanks to comfortable roads, such as the Francigena way and the Volterrana way that favoured the communication of the town with Florence and other river markets of the Valdarno. 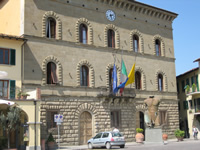 This is how the "mercatale" of Greve was born. It was a very populated trade area and it was characterized by the presence of Parishes, churches and castles, residences and farms owned by the Florentines at the time. At the end of the XIV century this area also produced an excellent wine that was very appreciated by the Sienese and Florentine aristocratic families. The latter enriched the area of Greve with their huge investments and, in some cases, also with their direct participation to in the local economy.
After the Unity of Italy, the "mercatale" of Greve became known and it was one of the most important centres in Chianti. The Neo-Renaissance church of Santa Croce a Greve can be visited inside the town. Near the town there are the suggestive medieval castle of Borgo di Montefioralle, a medieval military centre that is still very well preserved, the Parish of San Cresci and the Church of the Sacro Cuore in Greti.

Parish Curch
The parish church of the town, dedicated to the Santa Croce, contains a triptych by Bicci di Lorenzo. 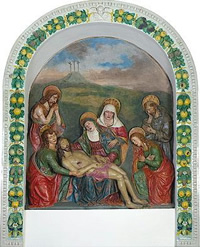 Museo Arte Sacra
The Museo di Arte Sacra has very recently been opened in the former convent of San Francesco; it houses an important collection of paintings, sculptures, vestments and liturgical furnishings, a tangible sign of the artistic vitality of the local district.

Surrondings
Greve is surrounded by delightful villages, such as Montefioralle with its stone houses and paved streets, or Panzano not far from which is the fine Romanesque church of San Leolino, with a five-arch sixteenth-century portico. The interior houses precious works of art. There are also many castles in the surroundings of Greve; originally defensive bastions they are now elegant residences or famous estates; Uzzano, Verrazzano (the name here recalls the famous navigator Giovanni da Verrazzano), Vicchiomaggio, Vignamaggio (where Leonardo's famous Mona Lisa was born), and Lamole, to name but a few. Of considerable interest in terms of landscape is the Monte San Michele, the highest peak in Chianti (892 m).

Greve in Chianti: discover the surroundings