Grosseto is the principal town in the Maremma. Its major activities are in agriculture, services and tourism. 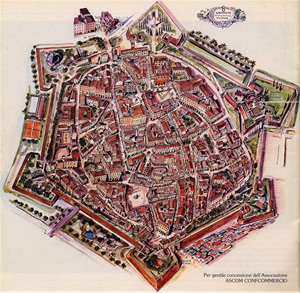 History
This busy center is the principal town in the Maremma. Its major activities are in agriculture, services and tourism. The last has continued to grow in the past years, as it has throughout the rest of the province. The city is situated in the Ombrone plain and is composed of an old center enclosed within huge hexagonal ramparts, and a much larger modern area with a regular plan. A well equipped airport for charter flights has been built in the vicinity. Originally there was a marine gulf nearby, but over the course of centuries it became a lagoon filled with marshes and cane thickets. The towns from the Etruscan period such as Vetulonia and Roselle demonstrate the prosperity of the zone, a prosperiety that continued under the Roman Empire.
The city began to expand about 935, after the devastation Roselle experienced at the hands of the Saracens, and became civitas in 1138 when Innocent II tranferred the episcopal seat there. From the 11th century it was a feud of the Aldobrandeschi family, then passed under Sienese dominion, then fell under Cosimo de’ Medici in 1559.
The noble Florentine family encouraged city’s economic recovery by excavating canals for land reclamation, constructing the city walls and building of public utility. Later in 1765 under the Grand dukes of Lorraine, the feudal privileges that inhibited economic growth were abolished and further work of land relamation was begun. Grosseto florished again once and for all with Leopold II (1828) and his impressive reclamation project. This was made possible by hydraulic engineers such as Giorgine, Fossombroni and Manetti who turned the Maremma into a lush and fertile land. 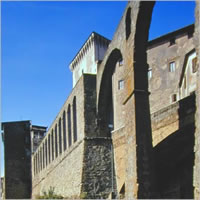 The work, which was completed with the agriculture riform of the early 1950s, encouraged a more specialized form of agriculture which could exploit local products such as wine, oil and cheese. These are the products which are most appreciated today. Tourism as well has benefited from an unspoiled natural environment, both along the coast and in the interior: the ecosystem sea-pine forest, Maremma Nature Park and hills. In addition, there are opportunities for “intelligent tourism” with itineries for every season of the year that are of unquestionable natural beauty and historical-cultural value. These are also made possible through artistic, cultural and folk tradition initiatives. The zone around Grosseto abounds in historic and artistic monuments such as the archeological area at Roselle. This is one of the principal twelve Etruscan poleis and is explained clearly with panels written in four languages. It was famous for its commerce and the terracotta produced in its workshops. It a rare example remaining of Etruscan fortification.
The small town of Montepescali, perched on top of a hill and circled by Medieval wall, is known for its 14th century buildings and breath-taking view. Batignano wth its city wall and keep and the picturesque town of Istia d’Ombrone are both interesting. Marina di Grosseto is a modern seaside resort along a large beach backed by a magnificent pine forest. Alberese is the home of the Butteri (Cowboys) and the Maremma Regional Park. The Mediterranean scrub and animals living in complete freedom mix with the remains of prehistoric villages, Etruscan and Medieval towns (including the extremely interesting San Rabano Abbey). They blend so perfectly that it is often hard to tell which work of art was created by nature and which by man. 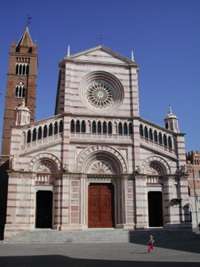 Visit Grosseto
Grosseto Cathedral - St. Lawrence cathedral
The most interesting monument of the city, although successive restorations and remodellings have taken away some of its original splendour, the cathedral is dedicated to St. Lawrence, patron of Grosseto.
It is built on the remains of the Church of S. Maria, which stood on this site in1138 at the time of bishop Rolando. The work began around 1190, under bishop Gualfredo; it was interrupted several times, mainly due to the wars with Siena.
Although partly restored in the 16th century by Lari, the façade still echoes the Romanesque style - mainly in the gallery and the rose window, which bears decorative motives close to Rustichini's hand. The symbols of the four Evangelists situated in the inferior cornice are by Rustichini; note that the symbol of St. John has been replaced by a bearded saint, while the original is now located on the first pilaster on the South side. The slender gothic windows, the pilasters and the door on the South side are also by Rustichini. Notice the jambs of the door, decorated with pannels of an elegant and vigorous style, representing scenes of Medieval life. On the lintel is a sculptured figure of Christ surrounded by the Evangelists.
The group located in the tympanum of the side door is a 1897 addition by the Sienese sculptor Maccari; it was inspired from a work by Giovanni D'Agostino. A Roman pillar topped by a composite corinthian capital stands at the right corner of the façade; it was used in the Middle Ages for the posting of announcements.
The church has a Latin cross plan, according to the Romanesque style. The pillars, six per side, divide the space into three naves. The central nave ends in a semi-circular apse. Light comes in through a series of windows situated above the ceiling of the aisles, from the large rose window in the façade and from two 15th-century stained glass windows by Girolamo di Benvenuto.
The stoup located in the first bay on the left is a beautiful work of art. It was donated by the craftsman Girolamo de' Vantaggioli in 1506 and is the work of an anonymous Sienese sculptor, who may also be the artist of the stoup known as the Federighi in Siena's cathedral. The triangular base is ornated with three putti alternated with three coats of arms - those of Grosseto, of theWork of the Cathedral, and of the donor; it supports a stand on which three putti ride three dolphins; the putti hold the bowl, ornated on the outside with birds and flower and fruit garlands, and on the inside with crabs, frogs and fish. Halfway up the stand is an inscription indicating the year in which the work was made.
In the second bay to the left stands the octagonal baptismal font, adorned with festoons; engraved on the pedestal are the arms of the Work of the Cathedral, of Grosseto, of Siena and of the donor, Salvatore di Lemmo di Castellammare, who payed for the realization of the font in 1470. The upper part is a small octagonal temple with seven niches occupied by saints. On top of the cupola, shaped with palms and stylized acanthus, stands the figure of St. John the Baptist. The work is attributed to Antonio Ghini.
The altar dedicated to Madonna delle Grazie (1474) is by the same artist. The beautiful Annunciation in the lunette, as well as other decorative motives of the altar, especially the cornice adorned with little angels, reveals the influence of Andrea Della Robbia.
The high altar, of inlaid marble, is from the Late Renaissance. On the right pilaster is a coloured stucco (15th century) in the Sienese School manner, representing the Holy Mother and Child. A painting by Rustici can be seen in the apse, S. Charles Borromeo and S. Lawrence adoring the Name of Jesus.
In the right arm of the transept stands a modern altar, the work of the sculptors Jardella and Martinelli. In the lunette is a figure of Jesus in the Garden of Ghetsemane.
The expressive crucifix (15th century) from the Sienese School, was donated by the deacon Giuliano Cesarini, bishop of Grosseto in 1439. In the antesacristy is a 16th century marble ciborium from Castiglione della Pescaia. 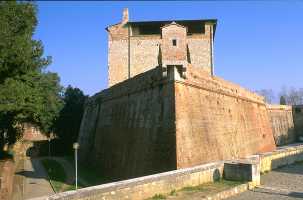 THE MEDICEAN FORTRESS
is the North-East bulwark of the Walls. It was built in the second half of the 16th century.
The city walls
The Medicean Walls have long since lost their defensive function; today, they are part of the not-to-miss attractions of our town and offer the visitor a stroll in the green.
Antique walls already surrounded the city in the 12th, 13th and 14th century. Many times destroyed and reconstructed, they were replaced during the Medici era by the hexagonal walls that enclose the historic center to this day.The construction was launched by Francesco I in 1574; the design is by Baldassare Lanci. The work was completed 19 years later under Ferdinando I. To provide the necessary workforce, convicts were sent from every prison in Tuscany, as ordered by special decree.
At each angle of the hexagonal structure stands a five-sided bastion, projecting outward in the shape of an arrow. The old citadel is protected by a second defensive wall, facing the inside of the city.
On top of the bastions stand the remains of the guards'"rooms". Galleries, storerooms, recesses of all kinds have maintained their original structure and give the Fortress, with its narrow stairways and floors with fishbone tiling, a strongly suggestive atmosphere of bygone times.
Until 1757 a ditch surrounded the outward part of the walls. Except for the few small and easily defensible doors, there were two main doors: one to the North - Porta Nuova - and one to the South - once Porta Reale, today Porta Vecchia.
Today the walls are a public garden.This latest transformation was the work Leopold II, who in 1855 ordered the demolition of some military towers and of the guards' quarters, giving the structure a less bellicose character. The guards' room known as casino delle palle, which was adorned with frescoes and had been preserved until the 20th century was destroyed during a bombing.

CANAPONE P.zza Dante. A marble statue representing Leopoldo II di Lorena dressed in kingly clothes. He is raising a woman representing the afflicted Maremma and trampling on a grass-snake which symbolizes the malaria. The statue was erected on 7th March 1846 and unveiled on 1st May 1846.

ETTORE SOCCI's bust. Honorary citizen, deputy of the Grosseto's Council, Republican, Socci was a great political and moral man. His bust was erected on 24th November 1907 with the sponsorship of the Council (200 Lira). It was made by Professor Gallori.

ANDREA DA GROSSETO Statue, Pzza Baccarini (in front of the Archaeological Museum). It has been erected recently. Andrea da Grosseto was a renowned literary man of the 13th century. A lay brother for somebody, a Franciscan friar for others.

"IL BUTTERO" BRONZE by Meo Faccendi, It is in P.zza Marconi (Station Square) and is a testimonial to a legendary figure of Maremma.

POZZO DELLA BUFALA, Chiostro(Cloister) di S. Francesco. Ferdinando I dei Medici had the well built at the end of the 16th century. It offers itself to visitors within enchanting frame of St Francis's Cloister.

VILLA RICASOLI, via Giacosa (Verde Maremma). Once it was a farm outside the city walls, owned by the Ricasoli family

MONUMENTO AI CADUTI , (War Memorial), Medicean Walls (S. Francesco's bulwark). The Memorial was unveiled on the 11th June 1986, the same day the Amiata waterworks were inaugurated. The Memorial was first placed in the square which is today called Piazza della Vasca, and then it was moved to the "Parco della Rimembranza" (Memorial Park).

Several MEMORIAL STONES can be found in the colonnade of the Palace of Council, in memory of national or local historical events. Among them, the memorial stone to Giuseppe Mazzini, wanted by the "Ombrone" Masonic Lodge.

S.PIETRO, Corso Carducci. It is the oldest church in Grosseto. Romanesque apse.