An exceptional excursion from Follonica is Punta Ala, only a few minutes by car taking Collacchie Road towards South direction. 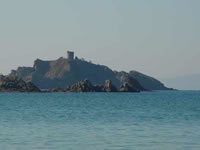 Itinerary to discover the most beautiful beaches of Tuscany

Punta Ala
An exceptional excursion from Follonica is Punta Ala, only a few minutes by car taking Collacchie Road towards South direction.
Modern and well equipped residential village with a rational tourist port, Punta Ala rises on a promontory surrounded by the sea in a wonderful position.
For its sport facilities, its elegant villas and hotels, built respecting the nature, it is the most "fashionable" tourist center of Maremma.

Talamone stands on a little promontory, dominated by an ancient Sienese fortress, to the extreme south of the Monti dell'Uccellina. It is a neat and pretty place, a town of fishermen, largely rebuilt after the damage caused by the Second World War. It originally stood on the Talamonaccio hill and was only moved to its present site in medieval times. In antiquity it was an Etruscan port. Near to Talamone is the spa of Osa. Here, a spring of suphureous water with a temperature of 32°C is exploited for the therapeutic purposes. The virtues of the waters of Osa have been renowned since time beyond recall. They were in use in Roman times and remains of buildings equipped for thermal cures have been excaved in the zone known as Bagno dell'Osa as well as in the Le Tombe district.

Rocca di Talamone
The ancient town of Talamone rises on a promontory at the southern extremity of the Mountains of the Uccellina (also national park), settled in a dominant position on the Tyrrenic coast. The site was an important settlement since the ancient times: first Etruscans (traces of the city of Tlamu have been discovered on the 'Talamonaccio' hill in 1888, not too far from the actual suburb) and then Roman. At the end of the last century returned to the light important architectural rests of this age: a pagan temple of the 225 A.C., built in commemoration of the victory [528 AC]of the Roman troops of Attilio Regolo against the Barbarian invaders (these vestiges are now preserved in the Archaeological Museum of Florence), the cemetery of the same battle, graves of the 200 AC, ruins of the thermal baths and, in the nearby valley of the river Osa, rests of a bridge with four arcades.
From the ancient times to the Middle Age Talamone crossed a period of almost total abandonment, unused ownership of the monks of the Abbadia S.Salvatore on the Mount Amiata. It knew new life when became fief of the Aldobrandeschi family and in the year 1303 of the Senese Republic. The Senesi reactivated the port trying to make it their principal maritime base, and built the mighty castle, that still today dominates the town and great part of the surrounding zone. The fortification has the a square shape, strengthened by turrets on the three angles toward the sea from and on the other one from taller and thicker tower, with the main function of watch tower.
The Fortress was at the core of the walls, of which are still visible notable rests, that encirlced the town, to the extreme peak on the rocky promontory sheer above the sea. The agglomeration of the houses results to be well central and isolated from the fortifications by a wide band of respect. The senese dream to make Talamone a powerful maritime center failed and the castle and the suburb returned soon in a state of abandonment, so much that the chronicles remember Talamone as an easy prey of the Saracen pirates raids. In the 15th century Siena repaired the fortification during the war against Florence, but this didn't prevent the castle from a twice destruction. Its actual aspect, smooth and deprived of crenellation and other parts, is due to the works of restorations made in 1557, when Talamone entered to make part of the State of the Spanish Garrisons [Stato dei Presidi Spagnoli], where remained until 1801. After a short Austrian first and of the Kingdom of Naples then domination, in 1814 it became part of the Gran Duchy of Tuscany. Talamone signed the book of Italian history in 1860, when Garibaldi disembarked with his men(the 'Mille'), to get supply of weapons and ammunition, on the route for the conquest of the Kingdom of the Two Sicily's.

Alberese and Marina di Alberese
The name of Alberese first appears in the XIth century, when the Benedictine Abbey of Santa Maria Alborense was founded, subsequently called San Rabano and destined to dominate the history of the entire area for the fifty years which followed. With the crisis of the monastic order, the Abbey fell into decline, and its long history closes with the passage of the Knights of Malta. In 1470, Beuccio Capacci, prior of the order, had a fortified building constructed which today is the Villa Fattoria Granducale which overlooks the town. At the end of the 1500’s, rule passed to the Medici family, up until the coming of the Corsini, in 1740, who, in 100 years, reduced the town to quite desperate conditions. It was then that, in 1839, Leopoldo II of Lorraine decided to purchase the Alberese estate and to undertake the work of reclaiming and developing the lands which had now become marshland, of improving the equipment and introducing new methods of cultivation. This, until the First World War broke out and following which, the holdings of the Lorraine, administered by the duke Pietro Lante della Rovere, were confiscated and passed to the State. Finally, in 1926, Alberese was ceded to the Opera Nazionale Combattenti (the Military Veterans’ association) which, during the fascist period, finished the reclamation work, dividing the land into lots and building farms which were then assigned to families of share-croppers, the most of whom came from the Veneto region. In 1977, this association was abolished and the lands were purchased by the Region of Tuscany, which, still today, administers them.