The territory of Impruneta is included in the system of lower hills between the Greve River and the Ema River. This territory slowly slopes down to Florence. 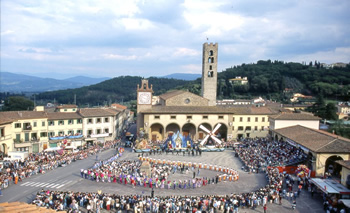 The territory is included in the system of lower hills between the Greve River and the Ema River. This territory slowly slopes down to Florence.
The name of Impruneta derives from “In Pruinetis” or “In pinetis”. Its history dates back to the Etruscans. The archaeological finds were tied together, to testify the presence of a place of worship, dating back to the VI century AC.
In the Medieval period, Impruneta became an important town, taking on the leadership of one of the 72 leagues of the Florentine rural area.
At the beginning of the XII century Florence came into contrast with the power of the nobles in the rural area. At that time the Rocca of Montebuoni was totally destroyed. This fortress belonged to the Buondelmonti’s family, who ruled over the entire territory of Impruneta.
Furthermore, the Buondelmonti’s family was in charge of the Pieve di Santa Maria, consecrated in 1060, famous for the cult of the Virgin, particularly venerated by the Florentines.
The art of “cotto” has been found on this area ever since the Medieval period, a natural consequence of the appropriate soil and the proximity to Florence.
In Florence, over the centuries, terracotta had been used for construction, ornaments and art objects. A notarial act stipulated in 1308 (florentine style) in Impruneta witnesses the presence of a corporation of “orciolai e mezzinai”. 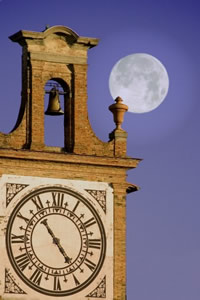 Already in the XIII century in the countryside of Impruneta, as in other towns of the countryside near Florence, many families purchased properties. The first to do so were the ancient families such as Bardi, Scolari, Adimari, Gherardini, Acciaioli, Rossi, Quaratesi, followed by merchants, professionals and artisans.
As time passed, these families established units of property called poderi, which consisted of a farmhouse and some other buildings. They organised their rural property on the so-called model of farming sharecropping.
The mixed farming, that unites cereal growing with fruit trees, olive trees and vineyard, was by far the prevailing method of cultivation, and has remained so up to this very day.
Over the centuries the hills surrounding Impruneta became covered with villas and important buildings not far from the farmhouses.
From an administrative point of view, after the medieval period, Impruneta became part of Galluzzo, which at the beginning was a jurisdction of a Podestà and later a municipality.
In 1929 Impruneta was established as a County Town.
During World War II, the town had been seriously damaged by bombing –in July 1944- which killed many citizens and destroyed most of the buildings.

Over the centuries in the territory of Impruneta the evidence of the man’s skilful works stands out. Impruneta can be considered a unique territorial contest, which consists of a collection of Tuscan hills with road networks, buildings, cultivation, pine forests, woods, mines and quarries.
The route stems from the proposal to understand all these marks, through a series of stopping places where landscapes and a heritage of great value can be observed. 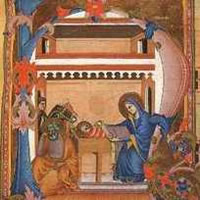 Sacred Land
The cultural heritage of Impruneta, which was built up over the centuries, is diffused over its territory, which is an extraordinary landscape with unique characteristics.
There are several important historical and artistic collections of great value, such as Museo di Arte Sacra in the Basilica, or some of the cotto handmanufacts in the brickworks. The archive of Maria Maltoni deserves to be mentioned because it testifies the experience of the Scuola di San Gersolè.
The ancient tradition of cotto and all the attention dedicated to the agricultural products are the results of the richness of Impruneta. We must also give recognition to some social aspects of Impruneta community life such as Fiera di San Luca and Festa dell’Uva, which play an essential role in its heritage.
As previously stated, Impruneta has a particular geographical position within the Province: on one hand it borders with Florence, a city of art and tourism; on the other it is the natural door giving access to the Chianti.
Taking all these elements into consideration, the County Town has undertaken a programme of initiatives in order to develop its identity, its own peculiar resources, keeping a close relationship with the surrounding territories.
One of the initiatives is Progetto Integrato –based on the participation of social bodies, cultural associations and entrepreneurs- which aims at the formation of the Ecomuseo Terre d’Impruneta.
Parusia has been chosen to provide the definition of the characteristics and the guidelines of the programme of Ecomuseo.
The choice of an ecomuseo seems to be appropriate to the cultural and environmental heritage of the territory. Moreover this choice seems to respond to the development of the local area, which the local government is trying to pursue in a balanced way in keeping with its history and its tradition.
The model for an ecomuseo was first established in France in the 50s and then became popular in Italy. During many congresses and conventions researchers underlined the fact that the ecomuseo is based upon “an agreement in which a community commits itself to preserve a territory”
The guide lines of the model are very simple. They include “a union of assets and locations”, which in their totality represent the territory. The guide lines provide the itineraries which permit the “knowledge and the enjoyment” of places.
These itineraries can provide a general survey of the territory or can specialise on individual arguments.
Information points for each area help visitors to get their bearings. These information points are the core to the functioning of an ecomuseo. At each point the visitor can find some rooms providing information, others for meetings and discussions, a library, archives, spaces to display permanent collection or temporary exhibition.

Certosa di Galluzzo
The Certosa del Galluzzo is prominently situated on a hillside just south of Florence and is clearly visible as a huge walled structure to travellers on the motorway from Florence to Sienna and on the SR1 road from Florence to San Casciano. Niccolò Acciaiuoli, one of the most powerful citizens of 14 C Florence, had the Certosa of Galluzzo built in 1341 not only as a religious centre but also for the education of the young. The Acciaiuoli (Acciaioli) Palace where the youth of Florence were taught towers upwards alongside the religious buildings of the monastery.
Galluzzo was one of the most influential monasteries in Europe and was immensely wealthy, with a population of hundreds of monks and, until the Napoleonic depredations, large numbers of works of art. Its huge library is now dispersed.
More information