The small town of Lari is situated where three ridges of the highest Pisan hills meet and has been inhabited since Etruscan times. 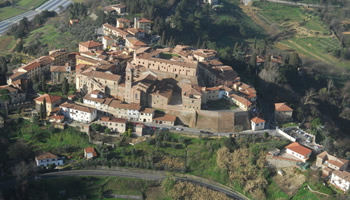 The small town of Lari is situated where three ridges of the highest Pisan hills meet and has been inhabited since Etruscan times. The massive Castle is built in the centre of the town; it was recorded in the early Middle Ages although the building we see today dates to the first half of the 17th century. Because of its dominant position of the entire valley of the River Arno (from the Castle walls the view stretches from the Pisan hills to the steep hills of Volterra, from the coast of Leghorn to Peccioli and beyond) the Castle was an important military stronghold of the Pisan Republic until it was conquered by Florence in October 1406. The Castle is defended by an exterior surrounding wall with three gates: `Porta Fiorentina´, `Pisana´ and `Volterrana´. The latter was the main road leading into the town and had a drawbridge, later removed in 1798. Mention must be made of the provost church of `S. Leonardo e S. Maria Assunta´ (St. Leonard and St. Mary of the Assumption) which dates back to the 15th century, with paintings by Melani and two marble statues attributed to Andrea Pisano, as well as the market arcade whose original plans date to the end of the 16th century while its present appearance dates to the mid 19th century when an earthquake caused serious damage to the building. Lari merits a leisurely stroll to gradually discover the myriad of charms hidden in its streets that meander away from the town across the surrounding countryside. "I came to Lari and from its castle saw the countryside spreading out before me, the jewel of Tuscany", as the Great Duke of Tuscany Leopold II said when he visited this small town. 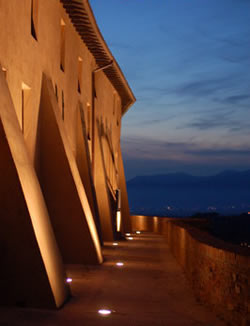 Vicari Castle in Lari
Apart from being in the past the central hub of Tuscan government, Lari Castle is now becoming increasingly important in the life of the surrounding area. In 1991 it began to be re-evaluated as a historical building, thanks to the efforts of the voluntary workers of the cultural association "Il Castello" supported by the Town Council, who opened it to public visits (entries are increasing all the time, showing the Castle is appreciated).
After only a few years, the first restoration work was started to restore the Castle to some of its ancient beauty. The architecture of the Castle remains almost unchanged since it was built as the seat of government. It was built on the top of the hill of Lari, from which vantage point it was possible keep watch over the entire valley of the River Arno. This is why it was so important, and, over the centuries, so disputed over. Inside there was a prison, Chancellery, the residence of the Vicario and the Magistrates´ Court.
The latter remained in use until 1962, and is now mainly used for conferences and civil weddings, for the enjoyment of bridal couples and speakers alike.
The Castle entrance courtyard is available for use either for weddings or conferences and is decorated with 92 coats-of-arms (these are also being restored) bequeathed by the many Vicari who lived in the Castle for over four centuries.
The Castle rooms also play host to various types of exhibitions, from art to poetry and even exhibitions of wartime relics.
And then there is "Magical History", a reconstruction of medieval battles acted by children in the courtyard and on the ramparts.
More info:
www.castellodilari.it

The Market Arcades
In 1559 the citizens of Lari asked Duke Cosimo I for permission to make a square with covered arcades for the weekly markets. The Medici coat of arms marked the completion of the arcade in 1565. In 1625 it was painted with frescos.
It was damaged by an earthquake in 1846 and was completely rebuilt altering the original triple-arch design. During the two decades of Fascist rule a Fascist Party office was built above the arcade; this is now the Council Chamber and the archive office for documents after the Unification of Italy

Chiesa di Santa Maria Assunta e San Leonardo
(Church of St. Mary of the Assumption and St. Leonard)
There was already a church in Lari in the 10th.century; it was enlarged in 1420. There are records of restoration work for the years 1682, 1811 and 1846-51. The foundations in the part of the apse are of the original building. In 1910 further restoration work was done that changed the style of the church from its then Baroque style to its present day Gothic Revival style.
Inside the church is the Madonna with Child by Andrea Della Robbia, moved here in 1921 from the Castle. The Florentine master was given the commission for the work by the Vicario Alessandro di Piero di Mariotto Segni in 1524.
In the side chapel on the left are two paintings depicting The Madonna of the Rosary, a good example of the 16th.century Florentine school, and The Coronation of the Virgin with St.Martin and St.Bona that was restored in 1888.
In the presbytery there are two statues of the Annunciation by Andrea Francesco Guardi who was active in the second half of the 15th.century.
The bell-tower probably dates from the 14th.century. It was later rebuilt as a tower and finally finished off with a spire in 1767.

Porta Maremmana
Also known as Porta Pisana, it is the most attractive gateway to the village and has two gates. In this way once the assailants had got through the first, weakest one, they could easily be attacked.