The old town of Licciana Nardi, itself, is elegant, with its church as richly decorated as its castle is austere. 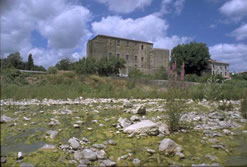 The Licciana Nardi Valley has some really beautiful views, especially around Monti and Apella, where the old tower is a reminder of the medieval settlement and where, in the old part of the town, the birthplace of the Risorgimental martyr Anacarsi Nardi is marked.

A VIEW OF THE OLD TOWN CENTRE
The old town of Licciana, itself, is elegant, with its church as richly decorated as its castle is austere.

OUTSIDE THE CENTRE OF LICCIANA NARDI
Monti Castle (12th -17th century)
Built around the 12th century it was adapted to various requirements over the centuries until, in the 16th and 17th centuries, it became an elegant seigneurial residence.
The Middle Age, the Reinassance and a touch of Baroque are combined in the castle to create a real synthesis of styles.
Info: the castle is privately owned and can only be visited by appointment.
Information office, Tel. 0187 422604 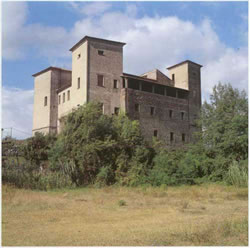 Bastia Castle (13th – 15th century)
The castle was erected towards the end of the 13th century to block belligerent forces coming from the Apennine passes.
The impressive military structure was owned by the Malaspina di Villafranca Family.
The original complex was modified several times.
With a quadrangular layout, it has a sturdy central keep with four angular, cylindrical towers, lower than the original structure. On the façade there are Guelph cross windows.
Info: the castle is privately owned. It can be visited from the outside.

Pieve di S. Maria Assunta, Venelia - Monti (11th century)
The parish church has maintained its original name, which is probably Ligurian, and there is documented evidence of its existence dating back to at least 1077, although it was dedicated to Santa Maria Assunta due to the indecorousness of the pagan origin of the name Venelia.
Today little can be seen of the old church as it was rebuilt (the orientation also changed)in the 18th century.
Of the old building, the beautiful Romanesque sandston apse on the side, remains. 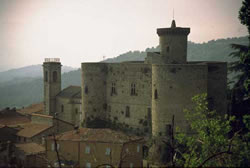 Pieve di S. Nicolò Varano
Unfortunately the original Romanesque structure of the building was destroyed by the various interventions and subsequent restoration.
It contains a priceless work of art: an altarpiece by Angelo Puccinelli, a painter from Lucca of the 14th century.

NATURE AND THE ROUTES
The naturalistic treasures offer wonderful paths where it is possibile to spend nice moment in the open air.

FOOD AND WINE
The torta d'erbi is a typical pie of the whole Lunigiana area.
It is made with vegetables (Swiss chard, onions, leeks, and borage, etc…) finely chopped.
In Spring the more archaic version is prepared, using only wild greens (nettles, primulas, violets, bramale cymes, hops, wild radicchio, and wild fennel, etc…)