Livorno was founded in the second half of the sixteenth century by the Medici .

History
Livorno was founded in the second half of the sixteenth century by the Medici when, for military and commercial reasons, the fishing village which had grown up round Matilde di Canossa’s keep (Mastio di Matilde di Canossa) rapidly became one of the Mediterranean’s main ports.
Reminders of the “Nations”, which contributed to the birth and growth of an important port known throughout the Mediterranean, are to be found in churches, historic cemeteries, archives and food.
Guarding the Port is the Fortezza Vecchia (Old Fortress) with its imposing Matilde’s Keep (Mastio di Matilde), connected by internal waterways to the Fortezza Nuova (New Fortress) in the heart of the city.

The old town - Venezia Nuova
The quarter known as Nuova Venezia (New Venice), built during the 17th century, still preserves some of its original featur

es.
Particularly interesting are the Medicean Fossi, a network of navigable canals connecting the warehouses and homes of merchants which, like those in Venice, had entrances at water level leading to rooms where goods were once stored.
Examples of elegant architecture can still be admired along Via Borra.
The quarter contains many religious and civic buildings such as Bottini dell’Olio – an eighteenth-century oil warehouse with vaulted ceilings.
Piazza della Repubblica is still admired today for its unusual architecture. It is in fact a bridge covering a long stretch of navigable canal.

Livorno and the sea
The sea flows through the Medicean canals right into the old quarters of the city, giving Livorno the unique charm of a piece of Tuscany reaching into the sea. Its history, traditions and culture, the flaming sunsets and limpid, scented air, sea sports and gastronomic traditions all speak of Livorno’s link with the sea.
Europe’s first bathing establishments were built here in the nineteenth century when the idea of seaside holidays first became popular.
The Natural History Museum and the Aquarium contain many precious treasures recovered from the sea. Livorno is home to the prestigious Naval Academy where Italian Navy officers have been trained for over a century, and which hosts an annual Sailing Trophy with participants from all over the world.
Ancient seagoing traditions are also kept alive by rowing races held between the city’s various quarters, both in the sea and on the canals. 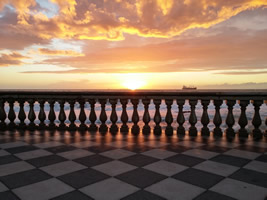 The seafront walk
A splendid seafront walk, often depicted in paintings by the Macchiaioli school, runs through palm trees and tamarisks, past cliffs, shingle beaches and rocks sculpted by the wind and waves.
From the Port of Livorno, dominated by the ancient Medicean Fortress, where fishing boats and leisure craft are moored, Viale Italia runs for nine enchanting kilometres to the village of Antignano.
Along the avenue are bathing establishments, stands of pine trees where painting exhibitions are held, pastel-coloured Art nouveau villas, inviting characteristic kiosks for a welcome rest, moorings and marinas, and the greenery of the Caprilli Racecourse where prestigious horse races are held during the season.
The Terrazza Mascagni offers wonderful views of Gorgona and Capraia, two islands of the Tuscan Archipelago, and Corsica.
The scenic route continues as far as Quercianella along a rocky coast with limpid waters, a paradise for fishermen and scuba divers.

Livorno and good eating
Livorno style cacciucco (a rich fish stew), red mullet, salt cod and dried cod are just some of the famous dishes from the town’s rich gastronomic tradition which grew out of its mix of different peoples and cultures.
These tasty fish dishes, dense with flavours and aroma, are offered by elegant restaurants and traditional trattorias by the sea or along the banks of the canals that flow through the old town.
Risotto with squid ink, shellfish, cuttlefish in piquant dressing, fine fish and oily fish are all cooked with mastery and imagination. Two specialities not to be missed are "torta" made with chickpea flour and eaten in a roll or "schiacciata" (flat bread), and "Livorno Punch" to round off a good meal.
The imposing architecture of the nineteenth century covered Central Market forms an elegant backdrop for the day’s fresh caught fish, the spices, fruits and thousands of other products to be found there. 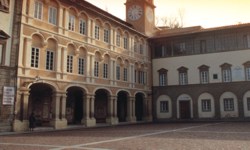 Montenero and its sanctuary
The Sanctuary of Montenero, dedicated to Our Lady of Grace, the patron saint of Tuscany, stands in the hilltop village of Montenero, already known to tourists in the Eighteenth century for its lovely countryside. Leading up to the Sanctuary is a wide flight of steps, from which there is a wonderful view of the town and sea below.
To the left is the church, its atrium decorated with frescoes, while on the right a loggia houses a memorial chapel with the tombs of well-known Livornese, such as the painters Enrico Pollastrini, Giovanni Fattori and the sculptor Paolo Emilio Demi.
Inside the Sanctuary, magnificently decorated with multi-coloured marble and stucco-work, the sacristy leads to a long gallery of votive offerings, evidence of the population’s devotion to Our Lady.