The town of Loro Ciuffenna conserves intact parts of its medieval architecture such as the bridge and the old mill which are attractions of the small town. 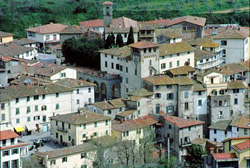 The town conserves intact parts of its medieval architecture such as the bridge and the old mill which are attractions of the small town. The rooms of the Town hall the Museo Venturino Venturi, with works by the painter born here. The museum contains a collection of bronze and wooden sculptures and ceramic pieces. A few khilometres from the historic centre is the lovely Pieve di San Pietro a Gròpina. Its capitals are rich in symbolic signs. A must is a visit to the small hamlet of Borro, which was until some years ago the home of the Duca Amadeo d'Aosta and now a part of a vast complex purchased by a well-known Tuscan family.

Castle of Loro
Castle of Loro was a fortified village at the confluence of two torrents crossed by two bridges in correspondence with two gates in the enclosing walls. One, earthed up in the middle of the 20th century and recently uncovered by a flood, passed over the Rio della Madonna. The other with its high span over the Ciuffenna – that flows into the gorge downstream from the village - is still quite visible and can be crossed. In the Middle Ages, they both enabled the road layout of the ancientVia Cassia to touch first and then to cross the castle, and then continue towards Pian di Sco and, subsequently, Castelfranco and Terranova. Of the medieval fortification of the village there remain traces inserted in the houses that look over Piazza dello Scoglio, in one of which can still be seen a door surmounted by a tower. Upon exiting from this, the road used to turn into the Ponte Vecchio [Old Bridge], near which – beyond the river – traces of the little barracks for the customs officials are still visible. In later times, the village continued to be extended towards the Ponte Vecchio and the river, constituting the agglomerate of Fondaccio - in this name we can conceivably recognise the term fondaco[warehouse], which indicated the merchants’ storehouses, with the houses rising above them – producing the opening up of still visible posterns in the enclosing walls. The door that is seen today, and the tower that stands there – partially rebuilt in style during the 19th century – belong to a progressive town-planning restructuring over the course of the centuries, when the defensive function ceased to exist with the establishing of the pax fiorentina.
Documentation regarding the existence of the settlement dates from at least 939, when its ownership was transferred to the Abbey of Santa Fiora with a deed of Kings Ugo and Lotario, subsequently confirmed by Ottone III in 996 and by Arrigo II in 1022. At the centre of a large circle of castles and fortresses located on the slopes of Pratomagno – allies that were more or less loyal, depending on the circumstances – dominated first of all the restless nobles of the Valdarno (the Ubertini and Guidi families), and then the Commune of Florence. It was always in the midst of plots and wars, until the Florentine power was definitively affirmed (1293-1306). Constituted into a Commune, its 1462 Statutes – that were subsequently amended – are preserved in the State Archives in Florence. In 1646, the Grand Duke of Tuscany, Ferdinando II, enfeoffed Loro with the title of Marquis to Piero Capponi. The fief remained in that family until 1665, when it returned to being the property of the Grand Duchy.
In the medieval layout, the fortress – located in correspondence with the present-day parish church of Santa Maria Assunta, in the high part of the town - had great importance. Perhaps as a result of destruction or partial collapse (as can be observed in many medieval buildings in the area, which occupied a part of the original fortress that was no longer necessary in the new political order), the church, that was smaller and sat perpendicularly to the present one, was enlarged. Its grandeur remains perceptible, in spite of the noble edifices that rose subsequently on the side of the mountain. One side of the square in front of the church is occupied by its right wall, in which the entry door – lateral with respect to the building – opens, corresponding to the original door to the church. The latter occupies the final part of the present church, and the apse constitutes its baptismal chapel. A mill, that still operates, must have served the population of Loro ever since ancient times: it is situated right in the village, along with a more recent spinning mill, today the seat of the municipal video and tape library. The ancient village preserves its original characteristics, which the resumed restoration activity certainly enhances. Already in past centuries, the village also developed outwards. Thus, both the Town Hall – with the Venturino Venturi museum and the municipal library – and the actual town centre are outside the walls. A short time ago, a new bridge replaced the Ponte Vecchio, on which vehicular traffic has recently been prohibited. Also, an overall town-planning re-organisation, that has witnessed the birth of entirely new districts, has been carried out. The mountain and hillside hamlets have been progressively emptied, although the second houses of many inhabitants of Loro still remain there: the inhabitants have transferred to the main town of the province because of the greater convenience in reaching their workplaces in the highly-active and flourishing area of the Valdarno. 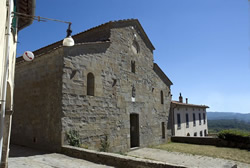 Pieve di San Pietro a Gropina
This Romanesque pieve is one of he most interesting pievi in the Valdarno. It has a very valuable pulpit supported by two entwining columns and is enriched with symbolic bas-relief figures.

The castle of Il Borro
Information has been available on this ancient fortified village, with its houses built of mixed stone and brick masonry and surrounded by natural moats – which is and was entered across a bridge which used to be of wood and is now of stone – ever since 1039. It was actively implicated in the complex events of history and war that involved the castles in the Loro region and the Valdarno, fluctuating between the influence of Arezzo and that of Florence, to the latter of which it was obliged to surrender in 1344. Even then, it did not have a tranquil life until the Florentines conquered Arezzo in 1384, taking all the castles between the two cities into its power. The Medici Grand-Dukes enfeoffed it in 1644 to Alessandro dal Borro with the title of marquis: the castle thus returned, after centuries, to the family that had formerly owned it. It then passed to the Capponi, Medici Tornaquinci, Della Torre, Hohenlohe and, lastly, Savoia Aosta families. Today, together with the estate of Il Borro, it is the property of Mr. Salvatore Ferragamo.

Few ruins remain of the already towered enclosing walls. The castle was entered from a steep road that ended in the drawbridge. It is said that the Via Cassia passed under this: a piece of the route appears a short distance away, on the uphill stretch towards the tableland that overlooks Castiglion Fibocchi.
Information on the parish church of San Biagio was available from 1344 on, when the inhabitants met there to decide on submitting to Florence. Belonging to the parish church of San Giustino, the church of Sant’Apollinare near Monticello -along the course of the Via Cassia- that has now disappeared but is documented since 1390, was subordinate to the parish church of San Biagio. Its foundations were discovered in the middle of the 19th century, as was also the case of the church named for Saints and Martyrs Ippolito and Cassiano, in the locality of Politi. In the castle is the oratory of Santa Maria Maddalena – to which a richly equipped Hospital with two beds (one for women and one for men) used to be annexed - and the church of La Compagnia, with a 16th-century painting and a 17th -century processional cross.
In the village, in addition to food shops and those selling household and gift items and antiques, there is an alley in which artisan workshops for goldsmiths and ceramists are located. The story of Pinocchio and a live Crèche are set up in several ancient premises.