Lucignano is one of the most interesting centres in Tuscany because of its original castle on an elliptical plan, closed in by a wall with towers.

This is one of the most interesting centres in Tuscany because of its original castle on an elliptical plan, closed in by a wall with towers. The old village centre presents, perfectly conserved, the Palazzo Comunale dating from the XIII cent.. Inside is a small museum containing paintings from the Siena and Aretine Schools as well as valuable pieces of gold works from the late Gothic period such as the famous Tree relic of Lucignano. Of great note are other religious buildings and the church of San Francesco decorated with frescoes by the Sienese painters Bartolo di Fredi and Taddeo di Bartolo. Of great interest is the one above the first altar of the right aisle known as the Trionfo della Morte in which, in a very effective wa, is represented the precariousness of human life. The imagination and the inspiration of its characters are shown in spring on the occasion of the Maggiolata Lucignanese where the sounds and colours reliven a tradition rich in history and music. 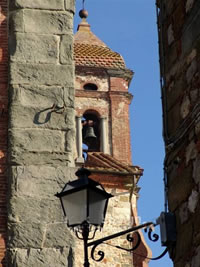 Sights of interest of Lucignano:
Collegiata di San Michele Arcangelo
Built on a design by Orazio Porta XVI century, it contains art works by artists from the XVI to the XVII century amongst whom are Giacinto Gimignani, Matteo Rosselli; a valuable marble altarpiece by Andrea Pozzo and a splendid wooden Crucifix from the XIV century

Chiesa di San Francesco
Dating from the XIII in Gothic form and decorated inside by valuable Sienese frescoes from the XIV to the XV century amongst which are Taddeo di Bartolo and Bartolo di Fredi. Of interest is the scene, on the wall of the right hand nave, of the Trionfo della Morte .

Santuario Santa Maria della Querce
The church dates from the second half of the XVI century from a design by Giorgio Vasari.

Chiesa di San Biagio
It was the pieve of Lucignano dedicated to San Felice dating back to 1016. Of the early construction only a bell-tower is left. 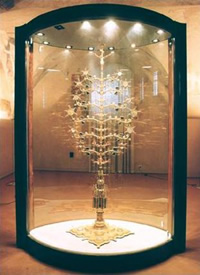 Museo Comunale
The Museo Comunale contains valuable pieces of Aretine gold work of late Gothic period amongst which is the famous Albero (tree) relic and paintings from the XIII to the XVII century.

The fortress
Lucignano, fortified town in the southern Tuscany, represents one of the most intact and perfect example of medieval concentric town-planning (realized thanks to the use of only ring-roads inside the town walls). Its roads are a intricate maze that leads to the highest point of the town, where the Palazzo the Comunale, Chiesa of S.Francesco and the Collegiata rises. The importance of Lucignano is all in its strategic geographic positioning, on a hill of 414 meters at dominion of the Valdichiana and of the main road of connection between Siena and Arezzo. For this reason the castle was always strongly hard-fought.

From the 1200 to the 1500 Lucignano has endured continues passages of jurisdiction between Siena, Arezzo, Florence and Perugia, city from which it had in gift the the coat of arms with the Winged Griffin, to which was added a star. The name 'Lucignano' derives probably from a Roman castrum founded from the consul Licinio, become 'Lucinianum' after the city was taken by Lucio Silla in the first century AC, the proof of settlement's antiquity is confirmed by many important archaeological reports of Etruscan age found in this area.

The top of the hill, where rose the original castle, was gradually transformed in a center of the political and religious power. In 1371, under the domination of Siena, the works of fortification ended with the finishing of the town walls, of which large parts gifted with some towers still remain, and the three gates: Porta S.Giusto, Porta S.Giovanni, and the so called Porta Murata, few years later was built the Rocca, or Cassero Senese, just against the town-walls at integration of the city defense. The Rocca has square shape and the responsible of its construction was the architect Bartolo Bartoli, from its walls emerges a mighty and high quadrangular tower, equipped of machicolation, while another one smaller, comes out from the northeast angle, towards the city, to control the main public square and the Collegiata. The complex is now private property and object of restoration [ in the past years it contained also a cinema!] with the works in an advanced phase. 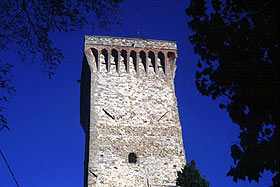 In the year 1554 Lucignano passed under the Medicean control and the Florentine Republic began a great series of urbanistic works like the construction of the Fortress, wanted in the 1558 by Cosimo and attributed to the architect Bernardo Puccini, the sanctuary of the Madonna della Querce, attributed to Vasari and placed outside the historical center (1568) the religious house of the Cappuccini (the 1580), the churches of Misericordia (1582) and Collegiata (1594).

The Fortezza, that rises isolated [today in front of the new cemetery ] on the hill opposite the one were the city stands, is made up of two bastions in stone turned towards the Sienese territory and joined together with a stone curtain [the two round towers that rise on each bastion are a last century addiction, used as windmills]. The construction of the fortress was never ended and today its ruins lack of maintenance and are partially invaded by vegetation.