Massa in Tuscany offers the tourist a look at the ancient marble quarries revered by sculptures from Michaelangelo to Henry Moore.

A VIEW OF THE OLD TOWN CENTRE OF MASSA
Palazzo Ducale (16th century)
Started in 1557 by Alberico Cybo-Malaspina, it is the result of the transformation-development of a pre-existing Malaspina building.
The complex architectural work only finished in the next century, with the façade decorated by Alessandro Bergamini.
Another Bergamini, Francesco, drew up the project for the chapel, with rich decorations by artists from Carrara including Ferdinando Tacca.
Francesco Bergamini also supervised the building of the internal portico, the monumental stairs and the upper loggia.
The characteristic “Grottesco” on the round floor dates back to 1701.
The building is currently used for the Prefecture and the Provincial Administration offices.
Info: URP Provincia di Massa-Carrara, Tel. 0585 816221

Chiesa Cattedrale SS. Pietro e Francesco (14th century)
According to reports from the period, at the end of the fifteenth century construction work starter on the Convento di S. Francesco di Massa.
It isn’t clear whether the church was built at the same time as the convent, or if the first was built onto an existing building.
The second hypothesis is believed to be more plausible by scholars, who date the year of the consecration as 1389. This makes it the oldest church of Massa, after the Pieve di S. Pietro (which no longer stands today). The current façade dates back to 1936.
The interior consists of one single spacious nave interrupted by a cross, with eight altars plus the high altar of the apse, all richly decorated with polychromatic marble.
There is also a font by Riccomanni, as well as many paintings and sculptures. In the valuts you will find the tombsd and the chapel of the Cybo-Malaspina family.

Chiesa della Madonna del Carmine (16th century)
Built in the middle of the 16th century with the Santa Chiara monastic complex by order of the Marchesa Taddea Malaspina.
The entrance to the building is guarded by a slender portico with marble columns, with a Majesty.
Inside there is a painting of the Lombard School, that dates back to the 15th century, dedicated to the Madonna del Carmine and, next to the high altar, tow paintings attributed to Domenico Fiasella.

The Diocesan Museum of Sacred Art
The Museum is housed in the “palazzino dei cadetti” which was built at the end of the 16th century by Alberico I Cybo-Malaspina and has recently been reconstructed.
The museum contains some important materials relevant to liturgy and the profession of the Catholic faith in the province of Massa-Carrara, coming from all the churches of the diocese.
They are precious objects and works, not only for their artistic value, but also and especially for their liturgical use.
Info: via Alberica, 26. Visit must be booked in advance, Tel. 0585 8990223 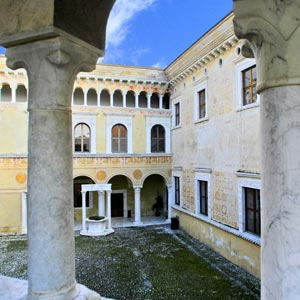 Castello Malaspina
Well preserved, the Castle shows the development of the military architecture. A primitive fortress fated tenth-eleventh century, was enlarged during the fifteenth century, becoming a renaissance building decorated with marble at the windows and polychrome figures on the walls.
Durino the sixteenth and seventeenth centuries it was fenced with rampants for defending from attacks. From the walls it is possible to see the city, the Apuan Alps and the sea.

Museo Etnologico delle Apuane
Situated in the Santuario degli Oliveti, it originally consisted of a collection of Lunigiana material related to the agricultural-pastoral use..
The museum, which developed over the years, today contains over ten thousand pieces related to the life and folk of Lunigiana, Garfagnana and Versilia. Its position in the heart of the Apuan Industrial Zone has led it to collect many pieces relevant to industrial archaelogy.
Info: via Uliveti, 85; loc. Madonna degli Uliveti, Massa. Visits must be booked in advance for groups and schools. Closed Monday. Tel. e fax 0585 251330.

This church is all that remains of an ancient settlement which probably stood on the site of a Roman Mansio serving those who travelled the Via Aemilia Scauri after passing the River Frigido in the direction of Luni. In the Middle Age the sacred building, in Romanesque Style, was also annexed to a “spedale”, in other words a hospice for travellers.

It was completely restructurated in the 1950’s and consists of a single environment, with a choir resting on a semicircular structure, perhaps the base of the old apse.

The original portal by Biduino was removed, probably in the post-war period, and is today on show at the Metropolitan Museum in New York.